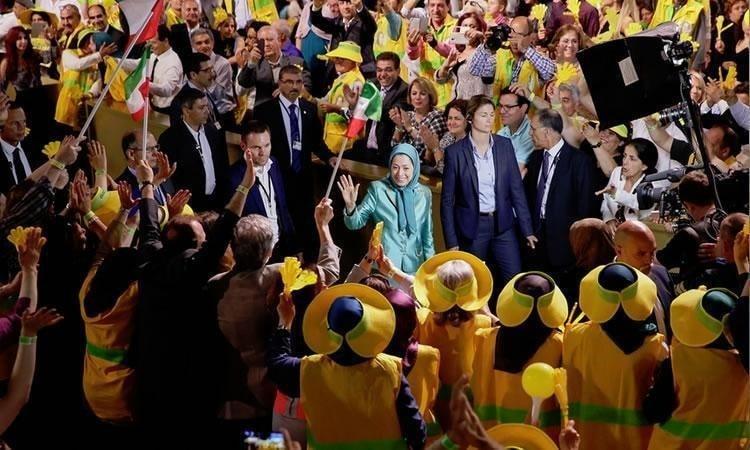 LE BOURGET, France — Tens of thousands of supporters of a dissident Iranian opposition group filled a vast convention hall here over the weekend to call for the downfall of Iran’s theocratic government.

The massive and boisterous event, which occurs annually in this town just north of Paris, was led by the controversial National Council of Resistance of Iran, a France-based umbrella group for Iranian exiles that brought dozens of former U.S., European and Middle Eastern officials together to speak out on its behalf.

A bipartisan clutch of Americans, including former House Speaker Newt Gingrich, former Vermont Gov. Howard Dean, former FBI Director Louis Freeh and a host of others was on hand.

But perhaps the most eye-opening speech came from a key figure of the Saudi royal family, whose posture toward Iran’s leadership has grown increasingly tense during the year since world powers put in place a major nuclear accord with the Islamic republic.

Prince Turki bin Faisal Al-Saud, the former longtime Saudi intelligence chief, drew loud cheers and applause from the Iranian dissident crowd when he exclaimed that he too wants the government in Tehran to be overthrown and that their “fight against the regime will reach its goal sooner or later.”

In a sign that Arab frustration toward Tehran reaches far beyond Saudi Arabia, Prince Turki was preceded on stage by a delegation of several other former and current officials from 12 Arab nations — all of whom also voiced support for the plight of the National Council of Resistance of Iran.

Yet the most vitriolic remarks at the rally, which occurred Saturday, came from the American delegation, which included former governors Bill Richardson and Tom Ridge, former George W. Bush administration U.N. Ambassador John R. Bolton — and included a presentation of video statements from several current members of Congress.

Mr. Gingrich steokd the crowd by lamenting the Obama administration-backed nuclear deal. The accord went into effect a year ago this week and saw many economic sanctions on Iran lifted in exchange for an agreement by Tehran to curtail its long-disputed nuclear program. 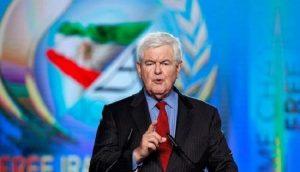 The “dictatorship” in Iran “cannot be trusted,” Mr. Gingrich said, adding that “the agreement made with it is insane.”

Mr. Bolton went even further. “There is only one answer here: to support legitimate opposition groups that favor overthrowing the military theocratic dictatorship inTehran,” he said. “Let me be very clear, it should be the declared policy of the United States of America and all its friends to do just that at the earliest opportunity. 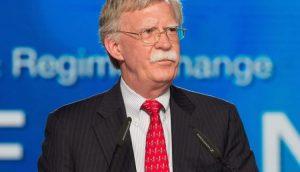 Both men appeared on stage with Mr. Richardson, a Democrat, who said he was “proud to be here with Speaker Gingrich and Ambassador Bolton,” and told the crowd that American “Democrats and Republicans are together here fighting with you.”

Saturday’s rally was a marathon that included more than nine hours of speeches and musical performances. But it drew little more than a mention in most mainstream Western media — presumably because of the National Council of Resistance of Iran’s turbulent history with the European Union and Washington.

The group’s most influential faction is the Mujahedeen-e-Khalq, or MEK, an outfit that the European Union and the United States listed for years as a terrorist group.

The MEK first appeared on the scene during the late 1970s, when it engaged in a power struggle against leaders of Iran’s Islamic Revolution. The group was later known to have carried out terrorist attacks against Iranian government targets during the 1980s.

While U.S. officials say it also participated in attacks on Americans, MEK representatives have long argued that the terrorist listing was never driven by legitimate U.S. national security concerns.

The group’s representatives claim that, during the late 1990s, the administration of President Bill Clinton engaged in a calculated smear campaign against the MEK and ultimately listed it as a terrorist organization as part of a strategic attempt to improve relations between Washington and Tehran.

With that as a backdrop, a 2014 report by the Council on Foreign Relations described the MEK as having formed along ideological lines espousing “a blend of Marxism, feminism, and Islamism.” And some former members have drawn attention over the years for criticizing the group as a cult.

After an exhaustive campaign that saw supporters spend millions lobbying and cozying up to current and former U.S. officials, the MEK was removed from EU and U.S. terror lists in 2009 and 2012, respectively.

While media scrutiny of the group has lingered, the bigger National Council ofResistance of Iran has come to be known during more recent years as perhaps the only dissent group on the planet with enough money and political juice to rally tens of thousands of supporters in the heart of Europe each June behind a collective call for the overthrow of Iran’s Shiite Islamist government.

Several former American officials have told The Washington Times that they receive speaking fees to participate in the National Council rally. But each also has asserted that their support for the group’s core message was real and passionate.

At a panel discussion ahead of MEK rally, Mr. Dean, who is also the former chairman of the Democratic National Committee and has attended the National Council rally for several years running, said he believes the group has been given a bad rap by Washington. 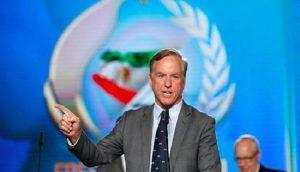 “I think this is an organization that is not understood well by the American government, and part of that is the deal that was made to put them on the terror list,” he said.

Struan Stevenson, a conservative Scottish politician and former European Parliament member, argued that any other group that could pull off a rally of the size that occurred Saturday would be making “headline news across the whole of the Western Hemisphere.”

“Why is it not?” he asked.Critical of Obama

No one disputes that the National Council has influence — some even describe it as the largest Iranian dissident group in the world.

But the organization’s persistence and tactics have given it a double-edged reputation even among some of Iran’s Western critics.

Mrs. Rajavi has led the movement since its founder — her husband, Massoud Rajavi — went into hiding in 2003. In an email interview ahead of the rally, she said participants “represent the voice of millions of Iranians who are being oppressed in their country and who seek regime change and the establishment of a democratic, pluralist and non-nuclear government based on the separation of religion and state.”

She also referred broadly to a “resistance” movement that she claimed has grown inside Iran during recent years even as the government has cracked down on opposition.

“Despite the intensification of the suppression over the past couple of years, we have witnessed a growing interest among the Iranian people, especially women and youth, toward the Iranian Resistance,” Mrs. Rajavi said. “The opposition to the regime is expanding. The Resistance’s network inside Iran is much more active in terms of organizing strikes, protests, sit-ins and other protest acts inside the country and even inside prisons. The Resistance has had numerous achievements in this regard.”

She also pushed back against characterizations of the National Council and its various affiliate organizations as acting like a cult.

“The source of these allegations is the Iranian regime’s intelligence ministry,” she said. “The regime’s lobbies in the West paint the Iranian opposition as a ‘cult’ or ‘terrorist group’ lacking popular support. By doing so, they want to perpetuate the notion that there is no other alternative for Iran except dealing with the ruling religious dictatorship.”

“I have said repeatedly that we are not fighting to obtain power in Iran,” Mrs. Rajavi said. “We are not even fighting for a share of power. We are fighting to create a situation where the people of Iran are able to freely elect the people they choose. I and our movement will certainly support anyone who is elected through the ballot box in the course of free and fair elections monitored internationally.”

On a separate front, the National Council leader said that state political freedom and human rights have only worsened in Iran since the inking of last year’s nuclear deal.

“The pace of executions has intensified,” she said.

While the Obama administration lifted many economic sanctions on Iran under last year’s nuclear accord, the State Department has continued to list the nation as a state sponsor of terrorism, and international sanctions remain on the Islamic Revolutionary Guards Corps (IRGC).

But Mrs. Rajavi suggested the remaining sanctions were irrelevant.

She criticized, for instance, the prospective agreement that has made headlines recently between Boeing and the government in Tehran, asserting that if the deal goes through, planes made by the American aerospace giant “will directly or indirectly be used by the IRGC” and “will facilitate the regime’s activities for sending forces and arms to Syria and other countries in the region.”

Grand raly of NCRI the role of Muslims in fight against terrorism.