Saturday marked the first time in over 30 years that a leading figure from the Sunni Arab world publicly declared its support for the MEK Rally, France-based National Council of Resistance of Iran ( NCRI ), an anti-Iranian regime opposition movement.

“We support you, we are with you,” Prince Turki Al-Faisal, a member of the Saudi Arabian royal family said to the crowd that gathered at the Le Bourget convention center for the “ MEK Rally”. “We stand by your side to help you reach your goals,” he said.
“ Maryam Rajavi , your aim to rid your people of the cancer that is Khomeini is an historic epic and, like the Shahnameh, it will remain inscribed the annals of History,” Prince al-Faisal said, referring to the president-elect of the NCRI who had addressed the sea of an estimated 106,000 supporters earlier in the afternoon. 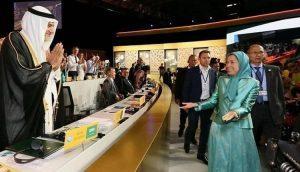 During her remarks, Rajavi encouraged the crowd that “the overthrow of the religious dictatorship [in Iran] is possible and within reach,” adding that “the question is not whether the ruling theocracy will be overthrown” but rather “how we can achieve this more quickly.”
The timing of Prince Faisal’s appearance and support for the NCRI is critical as it appears to echo growing global frustration with the Iranian regime under the Supreme Leader Ali Khamenei.
Saudi Arabia and the Islamic Republic of Iran are currently locked in a regional war as the Sunni and Shia nations’ battle for hegemony in the Middle East.

The United States’s decision to spearhead the implementation of the nuclear Iran deal has only exasperated the situation.
Prince Faisal cited an Islamic theologian, scholar, and mystic Al-Ghazali, during his speech, drawing upon a common heritage both nation’s share, and noted that the man who is regarded by most Muslims as the second-most important figure in Islam “after the Prophet Muhammad, was from a city near Mashhad.”
This past March, al-Faisal also had sharp words of rebuke for President Barack Obama following the American commander-in-chief’s use of the term “free riders” to describe Saudi Arabia in a piece published by the Atlantic called “The Obama Doctrine.”

Obama suggested the Saudis are getting a free ride, and Prince al-Faisal shot back with a public letter listing many foreign policy missteps taken by the Obama administration, going so far as to ridicule Obama’s philosophy of “leading from behind.”
In his response letter, the prince wrote, “We are not the ‘free riders’ … to whom you refer. We lead from the front and we accept our mistakes and rectify them.”
The signing of the Iran nuclear deal has been the source of much contention and has somewhat tarnished the perceived traditional alliance shared by the U.S. and Saudi Arabia.