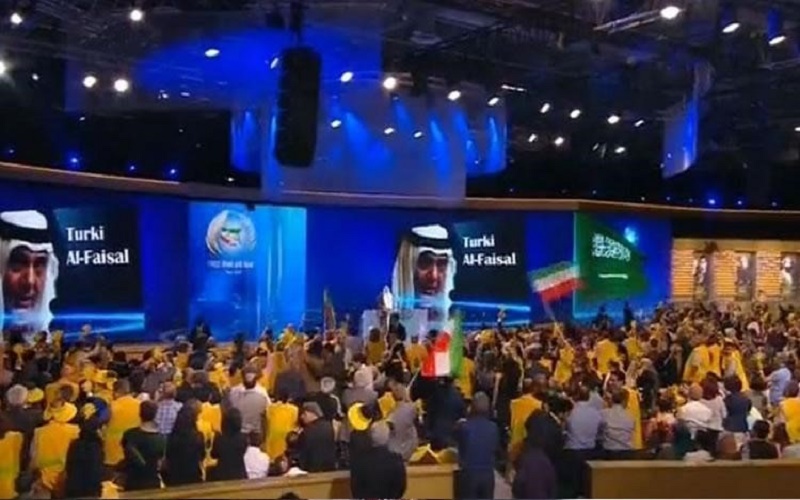 Turki al-Faisal is a remarkably modest man for a senior Saudi prince, always insisting that he speaks for no-one but himself and certainly not the ruling family.

But the kingdom’s former intelligence chief and ambassador to Washington has a habit of making waves when he appears in public.

Last weekend, he was one of several VIPs who attended a conference of the Iranian opposition movement, the National Council of Resistance Iran (NCRI), near Paris.

Turki accused the Islamic Republic of destabilising the Middle East and “spreading chaos”. He even said that he hoped to see the fall of the regime – in the familiar phrase of the Arab spring uprisings.

On a positive note, Turki did point to the long friendship and cooperation between Arabs and Persians, praising cultural achievements and religious commonalities and arguing that current tensions were an exception.

But he also attacked what he called the “Khomeini cancer” – strong words for such an exquisitely polite man to use about the architect of the 1979 revolution, who is still officially revered in Iran.

Relations between Riyadh and Tehran have seen ups and downs since that watershed year. Nowadays they are opposing sides of the many conflicts of the region – from Syria and Lebanon to Iraq, Bahrain and Yemen. They also diverge on the ever sensitive issue of Palestine and Israel.

The Saudis have plenty of money and a long-standing though changing alliance with the US, but nothing to match Iran’s ally, Hezbollah, which plays a key role fighting in support of Bashar al-Assad.

Strategic and economic rivalry between these neighbours – feeding through into sharp differences over oil exports – is intertwined with an ugly sectarian discourse that plumbs the depths of Sunni-Shia hostility and intolerance.

Relations hit a new low in January when the Saudis executed Sheikh Nimr al-Nimr, a renowned Shia cleric in the kingdom’s eastern province.

Iranian mobs stormed the Saudi embassy in Tehran and consulate in Mashhad, triggering a rupture in diplomatic relations and a propaganda war that has continued ever since.

Iran often accuses the Saudis of supporting Isis – or Daesh as it is universally known. And it was predictably quick to lash out at Turki’s comments: “The Saudis are resorting to well-known terrorists … as they have also done in Iraq, Yemen and Syria,” said a foreign ministry official.

“They use terrorism….to further their aims against Islamic countries.” The Revolutionary Guard echoed the complaints.Tehran’s position is that the NCRI, also known as the People’s Mujahideen, is a terrorist organisation. The EU, US and other western countries no longer take that view. 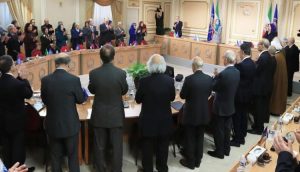 Until 2003 the group was based in Iraq, and was supported and used by Saddam Hussein as means of pressuring Iran.

It played a key role in exposing Iran’s undeclared nuclear activities. It enjoys no visible support inside Iran and is often described as “cult-like”.

Turki attracted attention on another controversial subject recently when heshared a platform with a retired Israeli general and argued for a two-state solution and Palestinian independence – while sharing concerns about Iran’s nuclear capabilities in the wake of last year’s international agreement.

Iran condemns Israel as an “illegitimate” regime and supports the Islamists of Hamas and Islamic Jihad, which advocate resistance to occupation and are at odds with the PLO.

Whatever Turki’s official standing he still runs the prestigious King Faisal Centre for Research and Islamic Studies in Riyadh. Last Sunday’s speech was closely covered by Saudi-owned media – ensuring that his words reached a large audience.

And one of the several western PR companies working for the Saudis took the trouble to distribute reports of the event to journalists in case they had missed it or its significance.

Messages like Turki’s are the headlines of geopolitical competition at a tense time. But there are consequences for ordinary people.

Saudi talk of ‘regime change’ takes enmity, to Iran to new level by the deaths of 464 Iranians in a stampede in Mecca last year. That was surely evidence, if it were needed, that even as they abuse each other, both governments are failing to serve their own citizens.