What is the message of the us senators visit with Mrs. Maryam Rajavi and the members of the PMOI/MEK for Iran?

Last week, a panel of US senators headed by Roy Blunt arrived in Tirana and met with Mrs. Maryam Rajavi, leader of the National Council of Resistance of Iran(NCRI) and members of the People’s Mojahedin Organization(PMOI/MEK).

During this meeting, the situation of the members of the PMOI/MEK in Albania, the latest situation in Iran and the region, and solutions to end the crisis in the region were discussed, American senators welcomed the relocation of PMOI/MEK members of Camp Liberty in Iraq to Albania .It should be remembered that the last group of members of the People’s Mojahedin Organization of Iran(PMOI/MEK), who lived in Camp Liberty near Iraq, was relocated to Albania last year. 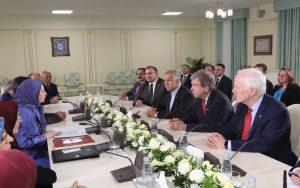 Maryam Rajavi thanked the Senators for their decisive position vis-à-vis the Iranian regime, especially the adoption of a new resolution which imposed sanctions on the clerical regime and the Islamic Revolutionary Guards Corps (IRGC) for human rights abuses, the ballistic missile program, and the export of terrorism.

Maryam Rajavi emphasized that contrary to the propaganda by the Iranian regime’s apologists, the ruling theocracy was rotten to the core and very fragile. Without foreign support, especially the policy of appeasement pursued in the U.S. and Europe, it would not have survived so long. She added that regime change in Iran is necessary and within reach because a viable and democratic alternative exists. Maryam Rajavi said equating regime change by the Iranian people for democracy with war and instability in the region is a sheer lie, the source of which is the Iranian regime’s lobby in western capitals. They demagogically turn the truth on its head, she noted, adding that the overthrow of the Tehran regime was a prerequisite to ending crisis and war in the Middle East.
Maryam Rajavi underscored the need for expelling the IRGC and its affiliated militias from Syria, Iraq, and other regional countries, taking urgent steps to punish the regime for widespread political executions, especially the 1988 massacre of 30,000 political prisoners.

It should be remembered that this meeting was just three weeks after the adoption of strong US sanctions against the Iranian regime and black list of the Islamic Revolutionary Guard Corps (IRGC), there is a strong message to the Iranian regime that conditions have changed and the winds do not blow the interests of Iran, But now the winds are in the interests of the PMOI/MEK, And this group has a special status as the only group and democratic alternative in the international community and among politicians, especially American politicians. Of course, it should not be forgotten that the PMOI/MEK, despite the conspiracies and the desire of the regime to destroy them, were able to keep their organization, which are now at the forefront of a resistance movement to overthrow this regime.

The Iranian regime probably understands the meaning of this visit, because it knows that the issue of regime change is not just the desire Iranian people, but it is also a regional demand. The regime also knows that due to its destructive activities in the region, particularly its support for Syrian dictator Bashar al-Assad, its support for the Houthi fundamentalist group in Yemen, as well as its active financial and arms support for Lebanon’s Hezbollah all the countries in the region oppose it, Therefore, the policy of regime change has become an international and regional demand.

PMOI/MEK is leading the uprising in Iran,Khamenei admits