Iran Protests: Who are the iranian opposition and who will rule if the regime falls?

One week of anti-government protests across Iran has posed the greatest existential threat to the Islamic Republic’s theocratic regime in almost a decade.

The spontaneous protests, often occurring in smaller provincial cities, have taken not only the Iranian government by surprise, they have also shocked traditional opposition groups and analysts.

As the demonstrations appear to falter in the face of pro-regime counterprotests and a crackdown by Iran’s brutal security forces, the country’s interior minister has admitted, in a conservative estimation, that 42,000 people took part in the rallies.

The protests began in the city of Mashhad, and by the end of the week anti-regime slogans rang out in the streets of the working class neighborhoods of Tehran. At least 21 have been killed, demonstrators have attacked police stations and the buildings of the judiciary, and 450 have been arrested. Videoed cell-phone footage of government buildings set ablaze have been shared on social media.

The speed with which the demonstrations—seemingly without any leadership or traditional hierarchy—were able to shake the Iranian establishment to its foundations while bringing together diverse grievances has left the world asking what, exactly, the Iranian opposition is, and who could potentially run the country of 80 million people if the mullahs were to fall.
The Protesters
Unlike any previous demonstrations in Iran, this most recent wave appears to have been sparked by the convergence of two unlikely groups: disaffected millennials and the working poor.

Sanam Vakil, a lecturer in the Middle East Studies department of the Johns Hopkins School of Advanced International Studies, told Newsweek that protests by the working classes and labor groups had been taking place sporadically in Iran in recent years.

“We have been seeing their protests for years now. They have been growing and waxing and waning depending on the issues but protesting against unpaid wages, for example, and labor conditions or the lack of labor rights. That’s been a consistent trend with strikes, but nothing that anyone thought was particular,” she explains.

But increased economic hardship and simmering public anger in neglected areas such as Kermanshah, in northwestern Iran, where 600 died in poorly built public housing in November 2017 in an earthquake, have brought their weight to bare in recent days. The second day of protests exploded in the mountain region on the country’s frontier with Iraq.

This second group of protesters, most of them under 25, had also been discounted in recent years. “This particular group of millennials are not as urban focused. They are from small towns and the peripheries of big cities. I think this group has had access to fairly good education but feels hopeless about their prospects for the future,” Vakil said.

“This group is very savvy with technology, active on social media and has limited employment prospects for the future,” she added. 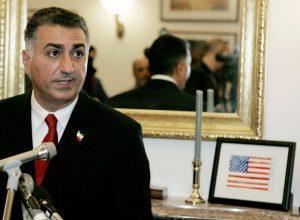 The Monarchy
Over the last seven days the protests have united Iranians discontent with wages, unemployment, a lack of labor laws, police brutality and corruption. But among the most surprising slogans heard in the streets of Iran were those calling for the reinstatement of the Pahlavi monarchy, ousted in 1979.

Crown Prince of Iran Reza Pahlavi, who fled Iran with his father Mohammad Reza Pahlavi, the former shah, has seized upon what appears to be at least some support for his return.

Speaking to BBC Radio 4, the prince suggested a form of constitutional monarchy would offer stability in Iran following the collapse of the Islamic Republic.

“Who then do you think people are chanting for today? I think they realize I am a person they can trust, a person they can recognize that has a particular political capital associate with this name. They attribute it to the modernity and progress that Iran had,” he said.

The crown prince has said he is not a monarchist and instead a democrat, but he ruled out returning to Iran until his safety can be assured. While he may have seen some smattering of support in recent days, this is most likely because of support among younger protesters who have no memory of pre-revolution Iran.

The Tehran-based intelligentsia that would have to back any meaningful revolution against the current regime would be unlikely to support his cause.

The Green Movement
The 2009 protests over elections that returned to power hard-liner President Mahmoud Ahmadinejad presented a far greater threat to the regime in Tehran than the last week’s protests have thus far.

The protests that disputed Ahmadinejad’s victory and backed opposition candidates Mir-Hossein Mousavi and Mehdi Karroubi became known as the Green Revolution. As the demonstrations were principally driven by anger over vote rigging, the movement inherited a hierarchy that included Mousavi and Karroubi, journalists and intellectuals around which others could coalesce.

“You had a big circle of activists, a women’s movement, a labor movement—to name the most prominent—but also smaller scale activisms around the country, on environmental issues growing out of the larger student body that didn’t have permanent activists but to a certain degree but were very active in the civil society sphere,” Vakil explained.

The middle-class, urban-based Green Movement was taken largely by surprise by the last week’s protests. However, calls for more demonstrations in Tehran on social media in recent days, followed by a swift government crackdown and specific warnings against certain activists in the capital not to take part in the demonstrations has shown that the movement, which less than a decade ago brought hundreds of thousands on to the streets, still has potency.

The MEK has found supporters in the GOP from backers like Rudy Giuliani and Newt Gingrich but also from Democratic figures such as former Florida Governor Howard Dean. In January 2017, Reuters reported, the group’s backers asked President Donald Trump to open a dialogue with the MEK.

While many in Washington may support the group in its ambition to overthrow the regime in Iran, it has courted controversy since the 1970s. The MEK supported Ayatollah Ruhollah Khomeini, pursuing a guerilla war against the Shah, but then parted ways with the revolution in 1981, vowing to topple the Islamic Republic. From 1997 to 2012, and after the group formed an alliance with Saddam Hussein, the MEK was designated a terrorist group by the State Department.

During this week’s protests, Maryam Rajavi, MEK’s leader, pledged her solidarity with the demonstrators, saying in a statement to Newsweek: “This uprising has tolled the death knell for the overthrow of the totally corrupt dictatorship of the mullahs, and is the rise of democracy, justice and popular sovereignty.”

Some of the MEK’s banners have been seen at demonstrations in Iran, but the group remains deeply divisive inside the country. It also remains the perpetual boogey man of the regime. Iranian State television reported Friday, according to the Associated Press, that three MEK members were arrested 185 miles southwest of Tehran for engaging in sabotage.

United Nations-Geneva: Speech by Dr Alejo Vidal-Quadras at the Conference on Human Rights in Iran