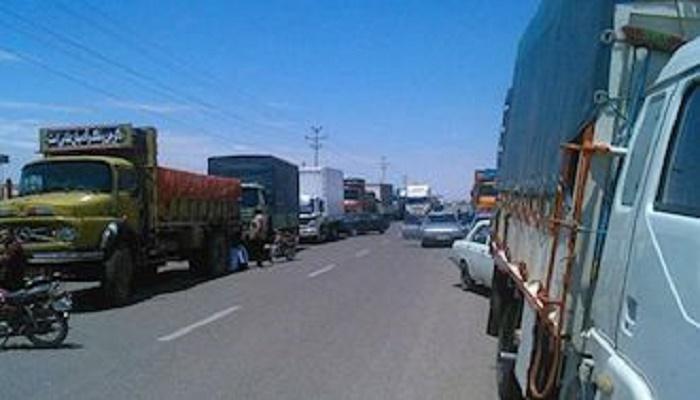 Iran: Truckers surpass 11th day of nationwide strikeAs the Iranian truck drivers began their strike, the focus was drawing attention to the lack of pay, increasing fees, and other concerns of the drivers. However, the strike also drew the attention of the security forces of the regime and the pressure was on for them to stop. Yet, these drivers have continued to protest.

Repressive measures include attacking protesters with electric shockers and tear gas, which resulted in multiple injuries. The State Security forces also have threatened those striking Truckers, removing their license plates and confiscating their refinery access permits.

On Saturday, the drivers were faced with agents from the Ministry of Intelligence and Security (MOIS), who summoned drivers from the various sectors of transportation. Their names were released on social media. In Sabzevar, the head of the State Security Forces allegedly threatened to ban the striking drivers from all the roads in Iran.

The motion: In solidarity

The Victorian Trades Hall Council is a representative body of trade union organisations, known as a Labour council, in the State of Victoria, Australia. It comprises 60 affiliated trade unions and professional associations, and eight regional Trades and Labour Councils of Victoria.

The Victorian Trades Hall Council is a representative body of trade union organisations, known as a Labour council, in the State of Victoria, Australia. It comprises 60 affiliated trade unions and professional associations, and eight regional Trades and Labour Councils of Victoria.

The Victorian Trades Hall Council expresses its solidarity with the Iranian heavy truck drivers in their strike to protect their livelihoods and working rights.

We express our condemnation of any government repression and sincerely hope that the drivers are successful in their struggle, which is part of a broader struggle for justice and democracy for Iranian workers.

Why Is The Mullahs Regime More Afraid Of The PMOI/MEK In Albania Than The MEK In Iraq?!
The regime wants to use a completely different spectrum of tactics to apply this time around. The Mullah’s regime in Iran has a single and widespread strategy against the MEK! The unit, inasmuch as its purpose is to eliminate the issue of a possible overthrow of it’s corrupt governance, which, from the regime’s point of view, is only the strong and determined MEK, that intends to realize it.

The regime wants to use a completely different spectrum of tactics to apply this time around.

Death Of The Iran Nuclear Deal (JCPOA) Or The Next Cups Of Poison?

WASHINGTON (Reuters) – President Donald Trump gave the Iran nuclear deal a final reprieve on Friday but warned European allies and Congress they had to work with him to fix ”the disastrous flaws” in the pact or face a U.S. exit.

US Treasury Department boycotted 14 agencies and other brokers include chief judge of Iran regime. The statement has said: Treasury Sanctions Individuals and Entities for Human Rights Abuses and Censorship in Iran, and Support to Sanctioned Weapons Proliferators.

Therefore, it is clear that the extension of this time of JCPOA,(in addition to new sanctions), only for the regime has the result to be forced, to retreat into missile projects, regional interventions and human rights abuses. Namely, in fear of death (abolition of JCPOA), It must commit to suicide (drinking the next poison)!

A variety of European and even Russian companies are ending their trade relations with Iran as intensifying U.S. sanctions against the Iranian regime kick in this month, and the three and six-month deadlines are counting down for the return of secondary sanctions.

Following the U.S. pulling out of the JCPOA, Iranian regime foreign minister Mohammad Javad Zarif described the nuclear deal as a “dying patient.”

The U.S. Treasury Department statement following the JCPOA exit explains how Iran sanctionswill return in 90 and 180 days. These measures include oil, sale of airplanes and currency sanctions.

Delegation from European countries and Canada