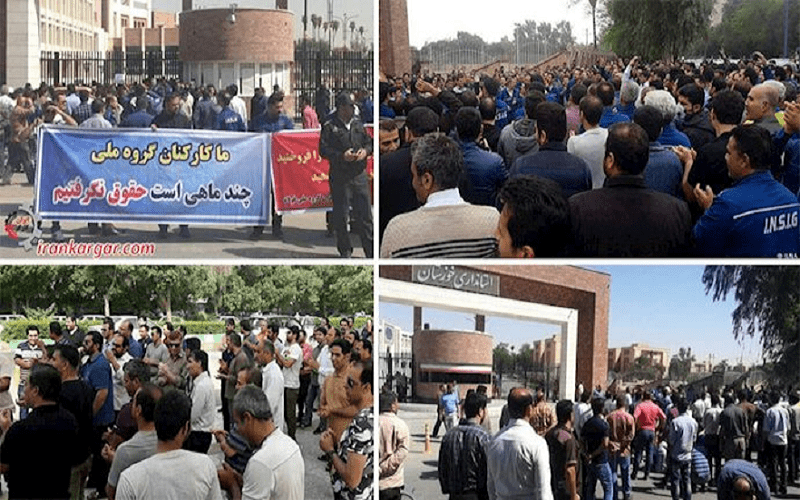 protests in different cities by reporters Reports from inside Iran indicate a continuing day of protests on Sunday in cities across the country and by people from all walks of life.More than 500 employees of the Ahwaz National Steel Company staged a march towards the governor’s office. .

Iran: Nationwide protest/uprising in the making

Fearing further protests and the international political balance of power tilting against the mullahs’ regime, senior officials and those considered close to regime supreme leader Ali Khamenei are seen warning of another uprising spark across the country.

The people’s rightful demands, expressed in marches, turned into a security situation back in Dec/Jan, they say. This can lead to a new such episode and result in a far larger crises engulfing the entire regime.

Senior Iranian regime officials consider the road ahead very much similar to a minefield, especially with protests and strikes on the rise. Some are going as far as saying members and supporters of the Iranian opposition People’s Mojahedin Organization of Iran (PMOI/MEK) members and supporters “laying the mines.”Middle EastNews

US Treasury Blacklists More Iranian OfficialsUS Treasury blacklists six individuals and three entities linked to the Iranian regime including Tehran’s notorious Evin Prison and the Ansar-e Hezbollah.Tehran’s notorious Evin PrisonThe following individuals have been added to OFAC’s SDN List:Abdulali Ali-Asgari, an Iranian media executive who is the current director-general of Iran ‘s IR Hossein Allahkaram is an ultraconservative figure and former military officer. He is head of the coordination council of Iran‘s Ansar-e Hezbollah, an entity dispatched to crackdown anti-regime protests.

Iranian rulers have said they will keep all options open as they respond to Mr Trump’s increasingly aggressive stance towards the republic. This could include Tehran resuming uranium enrichment and even withdrawing from the nuclear non-proliferation treaty — hardliners have long been critical of the deal arguing that the US could not be trusted and that Iran received minimal benefits. Please use the sharing tools found via the email icon at the top of articles. We will continue to be a good boy and stay in the nuclear deal, but without making any compromise on regional and defence issues,” saiexecutive close to the regime. “We need to survive for a couple of years until Trump finishes his term and then will see what happens next.”

Does the Trump Administration Support Regime Change in Iran?Secretary Pompeo’s language is elegant and explicit. When he says that we will support the Iranian people’s desire to “live their lives” freely, he is telling them and their oppressive ayatollahs that the United States supports revolution in Iran. He should be applauded. You don’t need to use the taboo words “regime change” to support the anti-regime protests that now cover the whole country. Just do it. The U.S. will work with Iranian opposition groups, the secretary noted, “so long as they’re working toward the same thing — we don’t want them advocating for regime change, either.”

I have a dream final Free Iran