Iranian authorities have arrested a lawyer for spreading “lies” after claiming that a Sufi man executed this week was wrongfully convicted of killing three police officers, local media report. Salas, 51, was hanged near Tehran early on June 18 after being convicted of killing three police officers during clashes involving members of a Sufi order, despite calls to stop his execution. The semiofficial Fars news agency said on June 20 that an arrest warrant was issued against Zeinab Taheri for making “false statements” and because of “her lies propagated online claiming [Mohammad Salas] was not guilty.”

Iran regime’s president, Hassan Rouhani, has issued a letter to the citizens of the country in an attempt to provide reassurance for the people’s widespread concerns. In the letter, he warned the regime’s different parties against “abusing” the dire economic situation. It is imperative for the EU officials that will be meeting with Iranian officials in the near future to take into account the behaviour of the Iranian regime. It has proven that it cannot be trusted and that it is incapable of reform. The EU upholds the human rights of its own citizens and it is high time that it makes the Iranian regime do the same for the citizens of Iran.

Ali Larijani said Thu. that Iran’s Parliament will act according to Ayatollah Khamenei’s directives about the country’s accession to AFTF’s bill on Convention for the Suppression of Financing of Terrorism.

“Major powers define these conventions to suit their own interests, while other countries, whether in approval or fear, pass them as their own domestic laws,” Ayatollah Khamenei said Wed., adding that the solution that the Parliament needs to adopt is to pass its own laws on FATF considerations. The solution is what we did about the bills on combating money laundering and financing terrorism; that is, we need to extract our intended items from the convention and compile them in a new law to evaluate in the Parliament,” he added.Nearly 30% of Iran’s youth are unemployed 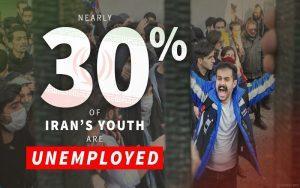 We condemn the Iran regime’s execution of Mohammad Salas, a member of the long-persecuted Iranian Gonabadi Sufi Dervish community. We call on our partners & allies to join us in condemning his brutal & unjust execution. Iranian people deserve respect for human rights & freedoms.