Nejat al-Astal, Member of Parliament from Palestine saluted Iranian people and appreciated their role to change Iran and supported their struggle to achieve human rights and change the situation of women in Iran. She saluted Mrs. Maryam Rajavi on the name of Palestinian people. She also supported her role in preserving human dignity as a common goal. 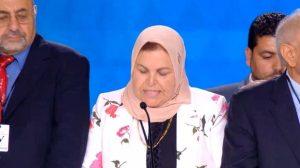 Nejat al-Astal, Member of Parliament from Palestine In the name of the Palestinian people, I salute you. I appreciate your role to change Iran and support your struggle to achieve human rights and change the situation of women in Iran.

Nejat al-Astal, Member of Parliament from Palestine We respect all the principles of the United Nations and human rights and women’s rights. We stand with you to make human dignity the basis of our common struggle.

Najima Thay Thay, former Minister of Education, Morocco For ten years I have been supporting you. I see happiness in your eyes. I can tell that the next gathering will be in #Iran. 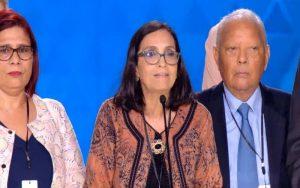 Najima Thay Thay, The dictatorship of the mullahs. The people of #Iran, from all ages and all religions and nationalities are on the streets. They have no guns, no tanks, no nuclear weapons, but they are in the streets. They will triumph.

The Arabs who want to confront the regime in #Iran must support the Mojahedin (#PMOI/#MEK), because our struggle is one.
Hopefully, next year, we will be under the leadership of Maryam Rajavi and our brother Mojahedin in Iran.#IStandWithMaryamRajavi#FreeIran2018 #Iran pic.twitter.com/oou0HmByAJ