According to the security services, the Wilrijk couple who wanted to make an attack in Paris were sent to Europe as spies by the Iranian regime.

Amir S. (38) and his wife Nasimeh N. (33) were required to apply for asylum and to keep quiet for years as a ‘sleeping cell’. That they were threatened and put under pressure by the Iranian regime is no longer believed by the security services.

The couple was stopped on Saturday in Sint-Pieters-Woluwe. In their car, with which they wanted to carry out an attack at a congress of the Iranian People’s Mojahedin of Iran (MEK) in Paris. They received this explosive earlier in the day in the Grand Duchy of Luxembourg of Assodollah A. (47), an Iranian diplomat of the embassy in Vienna.

Original article in the standaard

Amir S. and his wife have lived in Belgium for years. They have requested and received political asylum here, because in their homeland they were politically persecuted. They received Belgian nationality two years ago. On Saturday, they stated that they had been pressured by the Iranian government: ‘Otherwise, our family in Iran would pay for it.

‘That was a rehearsed number, which they kept ready for if things went wrong’, says a source at the security services now. “They had to stay ready for the day they would be needed.” Their membership of MEK was  just a way to infiltrate the Iranian opposition. It also served to be able to apply for political asylum. “The security services believe that the two had been headed by Assodollah A., who was arrested in Germany on Sunday, for years. 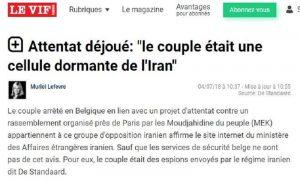