What should be done about the Iran’s government-sponsored terrorism

On June 30, as thousands of Iranians and political figures from five continents convened at Paris for the annual Iranian opposition Free Iran rally, the Belgian police arrested a group of terrorists in Brussels. At the same time, the German police arrested Assadollah Assadi, an Iranian regime diplomat. Other undisclosed arrests took place in neighboring European countries, all linked to a complicated terror plot against the Iranian opposition gathering in Paris.

This is part of a broader confrontation between the Iranian opposition and the regime and has now assumed a much larger context.

Another notable episode was the bombing of the U.S. Marines barracks in Beirut, Lebanon, again the doing of the IRGC and Hezbollah. During the attack, which took place on October 23, 1983, 241 American and 58 French military personnel were killed along with 6 civilians.

So this all brings us back to the first question: What must be done with the government-sponsored terrorism of the Iranian regime? As far as the people of Iran and taxpayers in western countries are concerned, the answer is clear: Every center and facility that gives the Iranian regime a diplomatic cover to carry out its evil terrorist plots must be closed down.

The federal judge is accusing Velayati of being affiliated to the 1994 AMIA Jewish center bombing in Buenos Aires that left 85 people killed and over 300 others injured.

On July 18th, 1994, a large building in Buenos Aires became the target of a major truck bombing. The Iranian regime to this day stands accused to have carried out this horrendous terror attack in collaboration with the Lebanese Hezbollah.

Since 2006 there has been an international arrest warrant for Velayati and seven other Iranian regime officials. 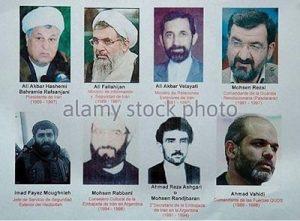 The pressure is mounting on the Iranian Regime, but, as always, the mullahs are failing to face up to their problems and are trying to deflect attention by increasing its threats against its Gulf neighbours and the international community.

It’s almost as if Iran believes that its demands will be met if it can intimidate the rest of the world with threats of military confrontation.

Then, to go from the illogical to the downright insane, Iranian Civil Defence Organisation chief Reza Jalali announced that water shortages in Iran have been caused by Israel stealing clouds and snow.

As economic, social, and diplomatic pressures on Iran grow, we can only expect more conspiracy theories and threats from the mullahs, which should show the world that this regime cannot be dealt with.

Bernard Kouchner: I’m with Maryam Rajavi for the new battle