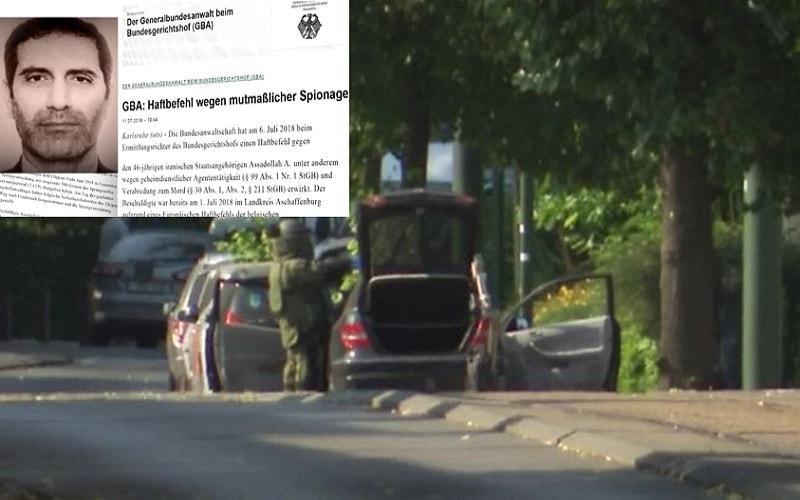 Following, the failure of a terror plot against the great gatherings of Iranians in Paris – which resulted in the arrest of a terrorist-diplomat of the clerical regime in Germany by the name of Asadollah Asadi, as well as the arrest of three others in Belgium and France – now the international community and public opinion rightly recognizes the fact that embassies of Khamenei’s dictatorship are safe havens for regime’s terror network abroad.

This fact becomes exceedingly apparent after the recent statement by the German prosecutor on the direct role of the regime’s terrorist diplomat in plotting of the Paris assassination attempt.

According to Associated Press news agency (July 11, 2018) quoting from German federal prosecutors on Wednesday, “Asadullah Asadi, a Vienna-based diplomat is suspected of contracting a couple in Belgium to attack the exiled Iranian opposition gathering in Paris. He was suspected of giving a device containing 500 grams of explosives TIPT to the couple.”

#Iran’s regime has brought suffering & death to the world & its own people. Just in Europe, Iran-sponsored assassinations, bombings & other terrorist attacks have scarred countless lives. Hope the Europeans raised this with Rouhani & Zarif on their European tour. pic.twitter.com/NjfOqmMw8f

Other examples can also be found in a tweet by the US secretary of state. Mike Pompeo writes clearly in this regard, “The Iranian regime has caused suffering and death in the world and for its own people. Only in Europe, attacks, bombings and other Iranian-backed terrorist attacks have damaged countless lives.”

“The US Secretary of State Mike Pompeo accused the Iranian regime of using its embassies to design terrorist attacks in Europe,” the Associated Press reported.

In this regard, we should mention the extended activities of Iranians in different countries to attract public opinion and media attention against the export of terrorism by the mullahs’ dictatorship under cover of diplomatic, cultural or commercial activities.

In this regard, we see that Iranians and supporters of the Iranian Resistance now in different cities of the world are exposing the terrorist crimes of the clerical regime and demanding the extradition to Belgium of the terrorist-diplomat who was arrested in Germany. We’ve seen such activities last week in big social networks such as Twitter, Telegram, Instagram or Facebook.

Along with these activities, the US Department of State (July 10, 2018) reported on the role of the regime’s embassies in the Europe which wrote: “We discussed how the Iranian regime used its embassies as a cover for conspiring terrorist attacks. The most recent example was a conspiracy which was foiled in Belgium, and we had an Iranian diplomat working outside the Austrian embassy as part of a bombing plot against the Iranian opposition leaders in Paris. ”

According to the report, “the United States urges all countries to carefully investigate diplomats at Iranian embassies in order to ensure the security of their countries” (PMOI website July 10, 1397)

The US State Department’s commentary confirms the existence of the policy of “export of terrorism,” carried out under cover of clerical regime embassies that has a history as much as the rule of the mullahs in Iran.

Khamenei’s need to export terrorism at a time when he is surrounded by severe internal and international crises is essential and real.

Accordingly, the Iranian people’s wish and public opinion in the world demand not only more transparency in this regard, but also true commitment to international laws and agreements as well as establishment of effective measures against mullah’s indiscriminate terrorism.

An example of that is the Council of Ministers’ decision in Europe on April 22, 1997, after the announcement of the Mykonos judgment, which its implementation is necessary more than ever.