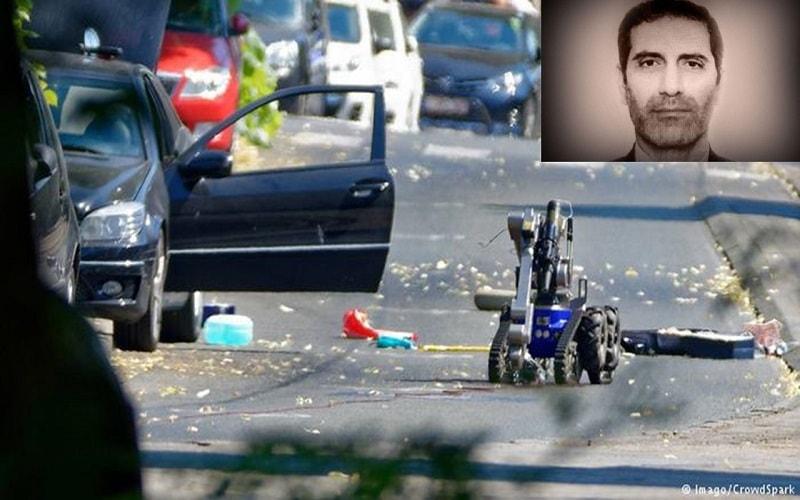 According to the security services, the Wilrijk couple who wanted to make an attack in Paris were sent to Europe as spies by the Iranian regime.

Terrorism and oppression were the legacy of Khomeini left for his successors. As the Iranian resistance has emphasized right from the outset since the emergence of the Islamic Republic up until today, terrorism and suppression are the two main pillars for the regime ensuring its grasp on power. And to this end, Khamenei has been even more committed to this than Khomeini.

The latest terrorist act of the Iranian mullahs abroad was a bombing plot against the Iranian Resistance in Paris, which, thankfully, was discovered and neutralized by the Belgian police before it was carried out.

Among the perpetrators who were arrested, there was an individual named Amir Assadollahi, a diplomat assigned to the Iranian embassy in Austria.  He was in charge of the whole operation and was arrested by the German police.

As the news of the uncovering of the plot hit the wires, it caused strong reactions against Hassan Rouhani’s visit to Switzerland and Austria that was to take place the following day.

The discovery, finding direct involvement of a Tehran’s diplomate-terrorist, as well as the widespread media coverage the news received globally, leads us to draw a specific conclusion.

Following the last December and January uprising of the Iranian people, the appeasement policy once again proved to be ineffective. And, as the balance of power turns in favor of the Iranian people and their resistance, there remains no more room to ignore the terrorism and destabilizing acts of the regime in the region and the world.

The arrest of the Iranian diplomat involved in a terrorist plot against the Iranian opposition in Paris showed that Europe can no longer ignore the terrorist measures of Tehran.#ExpelIranDiplomatTerrorists #Iranhttps://t.co/JTaNh5Bw4W

With the operation having been neutralized revealing the role of the Iranian embassy in Austria, the Iranian opposition’s argument is once again verified having insisted through the years the mullahs are the main source of terrorism in the world.

Why Mullahs Rule is Based On Repression And Terrorism?

When the mullahs came to power, they did not have the capacity to hold power and manage a country such as Iran – the country with 80 million people, great resources, with a geopolitical significance in the Middle East. So, in order to cover the weakness and inability to respond to the demands of the people, the regime had to resort to terrorism and repression.

And, they applied the same tools in their foreign policy and approached other countries with language of terrorism and destabilization. This was meant to guarantee that the mullahs can hold on to power. This can be seen from the start of the war with Iraq and until today in Syria and Yemen.

Through the years, the mullahs managed to cover up all internal and international challenges leveraging terrorism and oppression. And, because the western policies have been geared towards economic interests, the regime was able to avoid all consequences.

The mullahs used terrorism repeatedly in their foreign policy against interests of the western countries and countries in the region.

With ideological, financial and arms support for militias affiliated with them in the countries of the region, the mullahs were able to use them as proxy forces advancing their terrorist and interventionist interests.  Groups such as Lebanon’s Hezbollah to Jaish al-Ashabi and Houthis in Yemen are among examples of this.

The Iranian Resistance President, Maryam Rajavi, has repeatedly stated that the Iranian people are demanding a change in Iran and want no appeasement to the Iranian regime as the mullahs are godfathers of ISIL.

29 April 2015 – Speaking to members of House Foreign Affairs subcommittee via videoconference from France, Mrs. Maryam Rajavi told the members of congress that Iranians have dubbed the clerical regime the “godfather” of the Islamic State militant group.

Regretfully, the West has ignored these warnings for years, and mullahs, relying on the Western appeasement policy, have continued to repress the Iranian people internally and export fundamentalism and terrorism abroad without paying any price.

In Iran, people have no hope of achieving their economic aspirations. We clearly see that the chants of protesters quickly shift from economy to slogans demanding overthrowing of the regime – chants such as “death to dictator” and “death to Khamenei and Rouhani.”

Iranian People are now calling for changing of the whole regime, because they know the regime does not want to and nor can it solve the problems of the country.

Misgovernance of Iran's mullahs caused the people's disappointment. Therefore the protest of people, which had economic origins, converted to political demands of regime change, and people chanted the slogan, "Death to the dictator".#Iran #FreeIran2018 #IranRegimeChange pic.twitter.com/uBpDSaDbSJ

The plot to bomb the meeting of Iran’s Resistance in Paris illustrated the helplessness of Tehran to overcome the growing influence of their rival.

Logically, the Iranian regime should not have conspired such a plot right before the visit by its president Hassan Rouhani to Europe. But, in such desperate times for the regime, all curtains fall.  This action, without the regime wanting to do so, points at the directions of its true alternative for Iran.

The strength of the Iranian resistance as the only democratic alternative that promises to promote a free society for tomorrow, sounds the bells for the fall of the mullahs’ regime.

In the 1977 anti-monarchy uprising, the Iranian people knew that they did not want the Shah, but they were unaware of what type of government will take over. So Khomeini was able to betray the Iranian people’s trust.

Maryam Rajavi's speech at the #FreeIran2018 Rally of Resistance in Paris:
" This is the image of the democratic Alternative, which rejects the Mullah's rule or any from of dictatorship."#Iran #IranRegimeChange https://t.co/BkKgTzYioe

At the Paris gathering, hundreds of thousands of Iranians supported the Iranian resistance, and based on her ten point plan, Mrs. Maryam Rajavi gave the message to the world that the National Council of Resistance of Iran is the only democratic alternative to Iran.

This terrorist act of the regime led to massive coverage and many condemnations on a worldwide scale. In this regard, the US State Department published a list of regime’s terrorist acts during recent years, and Mayor Giuliani strongly condemned the act.

#Iran’s regime has brought suffering & death to the world & its own people. Just in Europe, Iran-sponsored assassinations, bombings & other terrorist attacks have scarred countless lives. Hope the Europeans raised this with Rouhani & Zarif on their European tour. pic.twitter.com/NjfOqmMw8f

What is the message of this gathering to the world?

First, the failure of mullahs’ policy of terror and repression both domestically and internationally.

Second, the appeasement policy, which for 40 years covered up for the terrorist activities of the mullahs in the West, should be completely abandoned and the West must unite against the mullahs to free itself from destabilizing threats of the regime. This is the only sound policy for the West with regards to Iran.

The best response to the Iranian mullahs’ acts of terrorism, is the closure of all embassies of this regime on the European soil.  This will ensure the security and safety of European citizens and will eliminate the possibility of the Iranian terrorist aggressions forever.

The Iranian diplomat arrested in the foiled bomb plot on the free Iran Rally organized by the Iranian opposition in Paris was a hurdle which rattled the Rouhani's trip to Europe.#ExpelIranDiplomatTerrorists #Iranhttps://t.co/v2NM5gd9qc

Speech by Pandeli Majko at Free Iran Rally in Paris