Mrs. Maryam Rajavi, the President-elect of the National Council of Resistance of Iran (NCRI), hailed today’s uprising by the people of Tehran, Isfahan, Shirza, Mashhad, Ahvaz, Karaj, Arak, Shahin-Shahr, Najafabad and other cities.

“By defying the criminal Revolutionary Guards, Bassijis، and plainclothes agents once again today, the arisen women and youth represent a defiant generation which will not rest until the Iranian people and nation are free. They displayed the anger and hatred of the Iranian people toward the religious dictatorship ruling Iran,” Mrs. Rajavi said.

After refusing food for nearly two months, imprisoned teacher Rouhollah Mardani’s health is deteriorating in Evin Prison in Tehran, a relative told the Center for Human Rights in Iran (CHRI) on August 1, 2018.

“During the first month, he had problems like dizziness, low blood pressure and physical weakness. Now he also has kidney and neurological pains and needs to be hospitalized, but despite much effort and pleas from his family, it hasn’t happened,” said the source who requested anonymity for fear of retaliation against Mardani.

On August 1, a group of teachers in Iran sent an open letter to Mardani urging him to end his hunger strike.

“It’s a very painful fact that the only way to hear cries for justice… is to go on hunger strike… But it is our hope that soon after you receive this letter, you will break your hunger strike and end the danger to your life and health that has caused your family to worry,” said the letter. 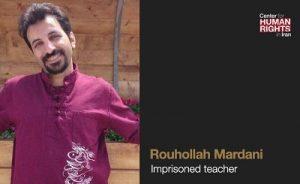 Demonstration and clashes with IRGC forces in Tehran with the slogans: “Death to Khamenei, Death to the Dictator”

On Thursday, August 2, on the second day of the uprising, protests spread to various cities of Iran. Demonstration of angry people that had begun on Thursday morning in Isfahan, Shiraz, Mashhad, Shahin Shahr, Najaf Abad, spread to Ahvaz, Arak, Karaj, Tehran and many other cities hours later.

The brave young people of Ahvaz demonstrated at Naderi intersection while chanting: “Our enemy is right here; they are lying that it is America”; “The nation is poor, while the mullahs live like a god.

In Tehran, the people demonstrated at Vali-e Asr Square chanting: “Death to Khamenei; Death to the Dictator; Cannon, tank, firecracker, mullahs should be killed.” They clashed with the IRGC forces who attacked them. They also set fire to trash bins on the way from Vali-e Asr toward Hossein Square in order to block the path of mercenaries.

In Arak, people chanted: The nation is poor, while the mullahs live like a god. High prices and inflation are the people’s calamity

In Najaf Abad, the brave women chanted: They fed Syria, but made our youths old. The brave youths chanted against the suppressive forces: You rascals.

In Shiraz, on Daryoush Street, the brave youths chanted slogans: Death to Khamenei; This month is the month of blood, the mullah is overthrown; Suppression doesn’t work; Cannon, tank, firecracker, the mullahs must get lost; Why you, the people, are sitting? Iran is like Palestine. The youth clashed with the mercenaries who had fired tear gas against them.

In a statement by Khamenei’s faction in Qom, the so-called “Coordinating Council of Principlists of Qom Province”, warned the people not to participate in the demonstrations because the People’s Mojahedin Organization of Iran (PMOI/MEK) uses the issue of high prices and economic disturbances and directs demonstrations against the regime. 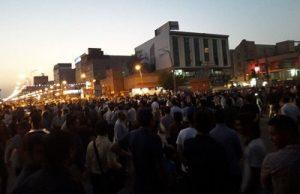 On July 31, in an open letter addressed to senior officials, the families of the eight environmentalists said their loved ones are being held in Tehran’s Evin prison without access to a lawyer. They asked the authorities to visit these detainees in prison to hear the circumstances of their detention. The environmentalists are Houman Jokar, Sepideh Kashani, Niloufar Bayani, Amirhossein Khaleghi, Sam Rajabi, Taher Ghadirian, Abolreza Kouhpayeh, and Morad Tahbaz.

Iranian attorney Mostafa Tork Hamadani has been charged for criticizing the judiciary for barring him and other defense lawyers from defending environmentalists who were arrested by the Islamic Revolutionary Guard Corps (IRGC).

Hamadani, who has taken on several human rights cases throughout his career, tweeted a copy of his summons document on July 26, 2018, adding:

“I was summoned to the Culture and Media Court based on a complaint by Tehran’s deputy prosecutor who accused me of spreading falsehoods. The reasons given in the complaint are my tweets about the late Seyed-Emami and the Note to Article 48 regarding the prohibition on lawyers against representing detained environmentalists. The investigator was polite and I hope my defense will be accepted. All my efforts are aimed at improving the climate for lawyers to defend the accused.”

Iranian Canadian academic and environmentalist Kavous Seyed-Emami died under suspicious circumstances in Iran’s Evin Prison in February 2018 after being arrested by the IRGC the previous month.

Several of his colleagues at the Persian Heritage Wildlife Foundation where Seyed-Emami worked as managing director remain detained since being arrested during the same month as him. 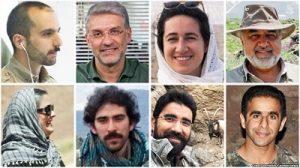 Maryam Rajavi Saluted the People of Karaj, Especially the Girls, and Called for Public Solidarity With Them

Courageous people and youths, especially young girls, demonstrated on Wednesday evening, August 1, for the second straight day. Police and suppressive intelligence forces, riot guards, IRGC, Bassij and criminal plainclothes mercenaries were deployed to prevent uprising of the fed-up people. However, the fearless youths rallied from the first square of Gohardasht toward Motahari Street. The crowd, which was growing every moment, chanted: “Cannon, tank, firecracker, the mullahs must get lost”; “Death to the Dictator”; “Our enemy is right here; they are lying that it is America!”; “Let go of Syria, think about us”; “Khamenei lives like gods, while the people live in poverty”.

Youths confronted the repressive forces with stones and bricks, punished them, and forced the mercenaries to flee. A police car and a number of anti-riot and Bassij motorcycles were set ablaze.

Mrs. Maryam Rajavi, President-elect of the Iranian Resistance, saluted the young uprisers of Karaj, praising the courage of freedom-loving girls at the forefront of the protests against the suppressive and corrupt regime of the Velayat-e faqih. She described their presence and struggle as the pride of the Iranian people, especially the freedom-loving women. She called on all people, especially women and youth, to show their solidarity and support for the rising people in Karaj. 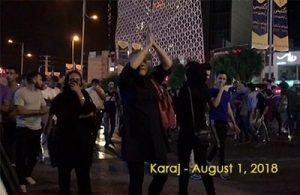 The UK Border Force intercepted at least two ‘O rings’ being flown from the international airport.

The ‘O rings’ – which can be used to form seals in warheads, were detected during an inspection of the shipment.

The force speculated the real intention for the O rings was to use them for missiles.

According to the Evening Standard, an investigation in to the shipment is now underway which could lead to criminal action against those responsible for sending the parts. 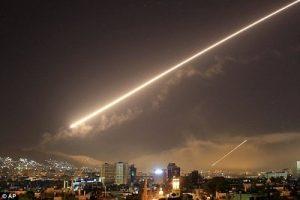 Since this morning, Thursday, August 2, angry protesters in various cities across the country, including Isfahan, Mashhad, Shiraz, Najaf Abad and Shahin Shahr, demonstrated against the tyranny of the mullahs’ regime, chanting slogans such as: Death to the Dictator. It was at a time when the repressive forces were on full alert from the first hours of the morning to prevent the formation of these protests, but they failed. The Internet connections have slowed down in many parts of the country. 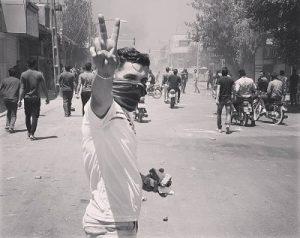 A brief report of the protests in Iran on Thursday