Thousands of risen people of Karaj, especially young men and women, demonstrated in the first square of Gohardasht on Friday evening, August 3, with the slogans of death to the dictator; death to Khamenei; our shame is our leader; dignified Iranians, support, support; Iranian dies but does not accept humility; what happened to our money? It is spent on Bassijis (IRGC militias); tank, cannon, firecracker, the mullah must get lost; we will fight, we will die, we will take Iran back! These protests continued until past midnight.

Scores of Revolutionary Guards, anti-riot guards and criminal plainclothes brutally raided the protesters to crush these protests and to prevent their spread, and targeted them with exercise bullets that injured one of the young people. Courageous youth confronted the mercenaries by setting fire to a number of their motorcycles.

The demonstrations of the people of Eshtehard also led to a conflict with the Basij and plainclothes murderers and anti-riot guards, after punishing the mercenaries, the young people succeeded after two hours in entering the city’s seminary of ignorance and crimes and destroying its contents. 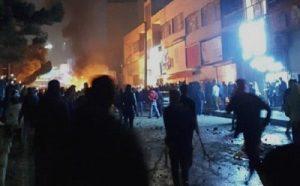 Germany’s central bank is changing its terms and conditions to provide for deeper scrutiny of cash transfers, a move that comes as Iran seeks to repatriate cash held in a Hamburg-based bank and the U.S. presses allies to get tough on Tehran.

Iran wants to bring home 300 million euros ($353 million) it has in the European-Iranian Trade Bank ahead of new U.S. sanctions. German authorities have been examining the request.

U.S. ambassador Richard Grenell said Saturday that the U.S. is grateful to the German government “for recognizing the need to act. Iran’s malign activities throughout Europe are a growing concern for us.”

For the fifth consecutive night, protests against the Iranian regime’s mishandling of the country’s economy erupted in several cities. In Tehran, Iran’s capital, protesters gathered in College Street and chanted “Death to the dictator,” “Mullahs must get lost” and “Iranians, shout for your rights.” 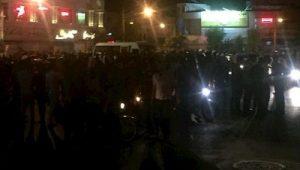 Iran August 5, 2018 – As protests continued for the fifth consecutive day in cities across Iran, the political prisoners of Ardabil prison issued a statement supporting  the protesters.

“We have learned that once again the Iranian people, fed up with decades of cruelty and corruption, are pouring to the streets in numerous cities raising their voice and demanding change.

In many cities, the slogans were directly aimed at Ali Khamenei, the supreme leader and highest authority of the Iranian regime. In Tehran’s Valiasr Street, people were chanting “Death to dictator” and “Seyyed Ali, it’s time for you to go.” 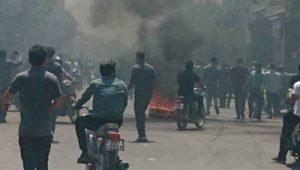 US representatives express their support of a democratic Iran