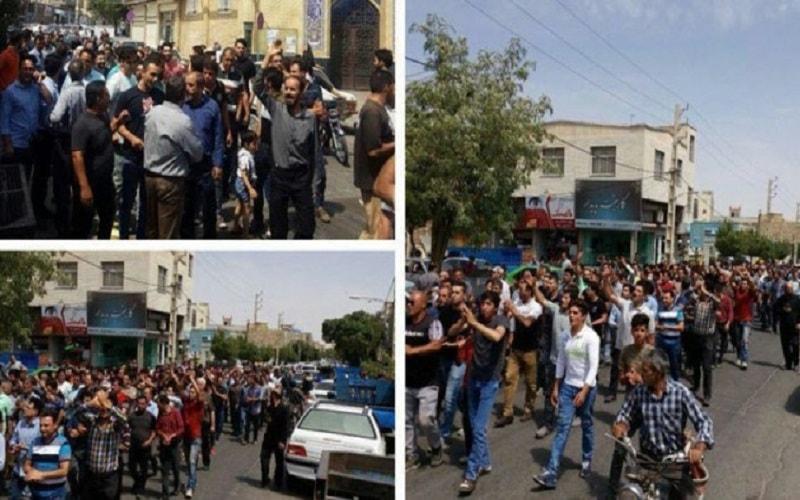 Iran, August 5, 2018 – One of the most notable characteristics of the demonstrations that shook different Iranian cities in the past week was the protesters’ slogans, which quickly transformed from economic woes to calls for the overthrow of the Iranian regime and the ouster of Ali Khamenei, its supreme leader.

Protests are taking place against the backdrop of escalating economic problems, unemployment, rising prices and the dwindling value of the rial, Iran’s national currency. Since April, the rial has lost half of its value. However, in many cities, protesters are chanting “Death to dictator” and “Death to Khamenei,” a clear and irrefutable call for regime change. This indicates that the people of Iran know well what is the source of their miseries and the daily degradation of their livelihoods.

Among the slogans are chants of “the people are begging while the leader is ruling like god.” While Iran’s economy has been in a freefall, the regime’s authorities and the IRGC continue to embezzle and steal from the country’s wealth to build their own personal economic empires. The National Council of Resistance of Iran has disclosed many of the details of the Iranian regime’s government-induced corruption and how its officials are directly stealing the people’s wealth.

With the Trump admin. soon reimposing sanctions against Iran, the Iranian economy is as feeble as ever.

And with brewing frustration among Iranian citizens, anti-govt demonstrations are popping up in cities around the country. @roxanasaberi reports https://t.co/w8xM8UoTyG pic.twitter.com/SS5Fvnb17n

There have also been direct clashes between protesters and security forces dispatch to quell the demonstrations and disperse the crowds. The people are becoming bolder in confronting the regime’s repressive forces. Accordingly, it’s clear that the regime’s riot police and bassij militia are becoming more and more reluctant to directly engage conflicts with protesters. Videos obtained in recent days show the police shooting at demonstrators from afar.

As protests continue in Iran, the regime is preparing to face the new round of U.S. sanctions coming into effect on Monday. While the regime has tried to blame the U.S. and other foreign powers for Iran’s economic grievances, the people of Iran hold no illusion as to who is to blame. In the latest protests, demonstrators were chanting, “Sorry Seyyed Ali [Khamenei], it’s time for you to go.”

US representatives express their support of a democratic Iran