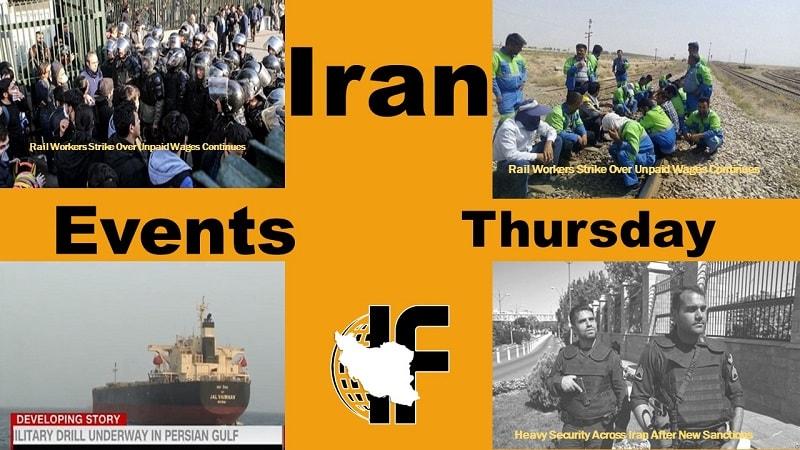 A commander in the Iranian Regime’s Revolutionary Guards Corps (IRGC) has admitted that the recent attack of two Saudi oil tankers in Bab al-Mandeb Strait by the Yemeni Houthis was carried out on the request of the IRGC.

IRGC Commander Nasser Shabani told Iran’s state-run Fars news agency: “We asked the Yemenis to attack the two Saudi oil tankers, so they did it.”

During the interview, Shabani also said that the Houti militias in Yemen and the Hezbollah militias in Lebanon “represented Iran’s depth in the region”.

This appears to be a blatant admission by Iran of their support for the Houthi militias, which is well-known despite the Regime’s frequent denials.

Given how much the Iranian Regime wants to keep this support a secret, it shouldn’t surprise anyone to learn that the Fars News Agency deleted the article just minutes after publishing it. However, a screen grab of the article is available here.

A rail workers group in Iran has issued a statement saying that workers will remain on strike until their demands are met.

The rail workers have been on strike across Iran since July 20, in cities like Arak, Azarbaijan, Isfahan, Khorasan, Lorestan, and Zanjan, demanding the payment of their two-month overdue salaries.

The statement demands that the several thousand workers, who are responsible for maintaining the country’s rail lines, are paid their back salary. They’ve also demanded permanent contracts, an immediate end to layoffs, insurance benefits, the right to form a union, and the right to protest.

Hassan Rouhani government has repeatedly promised to see that the wages are paid, but this has not materialised into any sort of action. 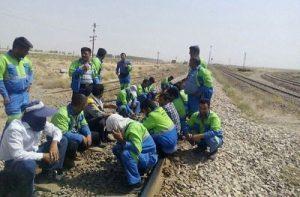 Washington (CNN) – In a blistering criticism of the leader of the Islamic Revolutionary Guards Quds Force, the four-star US general in charge of US military of operations in the Middle East said Qasem Soleimani is behind much of Iran’s destabilizing activities in the region.

Speaking to Pentagon reporters Wednesday, General Joseph Votel, the head of US Central Command, described Soleimani as “an individual who is perpetrating a lot of this destabilizing activity.”

Votel called out the IRGC leader for “his very aggressive nature and wherever you see Iranian activity, you see Qasem Soleimani, whether it is in Syria, whether it is in Iraq, whether it is in Yemen, he is there and it is the Quds force, the organization which he leads, that I think is the principal threat as we look at this and the principle ones that are stoking this destabilizing activity.”

Votel emphasized that the US military can keep the Strait of Hormuz open for shipping despite Iranian threats to potentially shut it down. 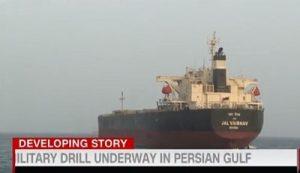 Scattered protests, along with a heavy police presence in many places were reported Wednesday across Iran, one day after the first round of new U.S. economic sanctions went into effect.

The Iranian parliament voted to remove Labor Minister Ali Rabie during a raucous debate Wednesday on new economic policies to tackle unemployment and bolster the weak economic situation in the country, a day after new U.S. economic sanctions went into effect. 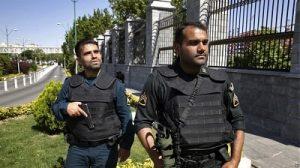 The Organization of Islamic Cooperation’s (OIC) permanent representatives condemned in the strongest terms on Wednesday the attack by the Iran-backed Houthi militias in Yemen on two Saudi oil tankers in the Bab al-Mandeb Strait in July, reported the Saudi Press Agency.

They said that the attack was a flagrant violation of all international laws and norms and a serious threat to international navigation.

They called on the international community to condemn these attacks and to counter all serious terrorist acts by the Houthis and their supporters. They demanded that the necessary measures be taken to prevent the recurrence of such hostile actions in the future.

They also called on the United Nations Security Council to take all possible steps to ensure the prompt and full implementation of its two resolutions 2216 and 2231 to prevent the escalation of Houthi attacks. The Houthis and their Iranian sponsors must be held accountable for their countless crimes against international law.

A project to export cattle to Iran from Normandy in northern France has been halted due to the United States’ renewed sanctions against Tehran, a French Senator said, as Washington’s policy takes its toll on its European allies.

The sanctions, following U.S. President Donald Trump’s withdrawal from an international accord on Iran’s nuclear program, took effect on Tuesday. They have led many European companies to back out of investments in Iran, including French energy giant Total (TOTF.PA) and car maker Peugeot (PEUP.PA).

While food and farming sectors are not directly targeted by Washington, the sanctions have made banks reluctant to finance deals, while companies with ties to the United States are afraid of incurring any penalties.

Iranian diplomat accused of running web of spies across Europe

Iran is running a wide-ranging espionage network across Europe with the aim of procuring technology to boost the country’s missile arsenal, disrupt opposition groups and carry out targeted assassinations, intelligence reports and opposition groups have disclosed.

Opposition sources revealed on Wednesday that Asdollah Assadi, the Iranian diplomat arrested in Germany in June for orchestrating a bomb plot against an opposition rally in Paris, headed the Tehran-run European-wide network.

Assadi remains in detention in Germany pending an extradition request from Belgium where the alleged bombers were intercepted.

Activists said the decision to authorise the attack in Paris was taken by Tehran’s Supreme National Security Council in January this year and that the head of Foreign Intelligence and Movements in the Ministry of Intelligence and Security (MOIS), Reza Amiri Moghadam passed control of the plot to Assadi in March.

Half-a-kilo of home-made explosives TATP and a detonator was seized from the car of a married couple who were identified as being residents in the Belgian city of Antwerp. Another alleged facilitator of the plot was arrested and extradited from France to face trial.

Among those who attended the rally of the Paris-based National Council of Resistance of Iran (NCRI) on June 30 was Rudy Guiliani, the ex-New York mayor who now serves as Donald Trump’s lawyer, and the former Prime Minister Stephen Harper of Canada. Some of the politicians who were at the event at Villepinte outside Paris now plan to join the trial as civil complainants, the NCRI said.

LONDON: Amnesty International has called on Tehran to release peaceful protesters following a wave of arrests over demonstrations against Iran’s dire economic conditions and its foreign military interventions.

The world’s leading human-rights organization also urged the authorities to conduct a “prompt, impartial and independent” investigation into the killing of a protester in Karaj, north-west of Tehran, on Aug. 3.

“Amnesty International is also urging the authorities to protect all detainees from torture and other ill-treatment and to reveal the fate and whereabouts of dozens of detainees whose families have not heard from them since their arrests,” the rights group said in a statement. 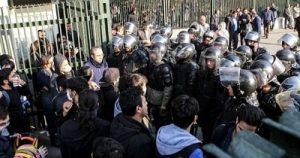