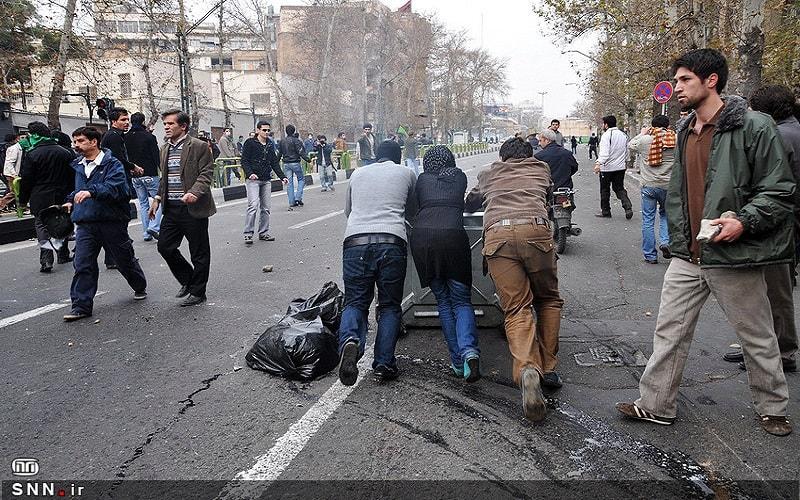 Outcomes of popular Iran uprisings, an unstable regime in Iran

These days the theocratic regime in Iran faces a deadlock in resolving social problems. Now the leaders of the regime are openly expressing concern over Iran uprising. The regime’s agents say that the uprising is now wider and more organized compared to last December. The Iran regime has lost its balance due to the organized protests and uprisings.

Football matches, an arena of protesting against dictatorship:

Youths and football fans at the Azadi stadium in Tehran chanted the slogan “Death to the dictator” and once again turned a sporting event in a scene of   protest against the dictatorship. This protest movement took place in spite of the regime’s readiness for suppression by deploying thousands of security forces and plainclothes officers to the scene which were anyway vanquished by the first move of the peoples’ waves.

The leaders of the regime admit the threat of Iran uprising:

The following are some examples of ample remarks by the authorities of the Iran regime:

– Saleh Nikbakht, jurist: “To be said or not, the people express their discontent in rallies and cyberspace.”

– Shahroud, the Friday prayers Imam, “The Mojahedin are seeking   conflict and cultural conspiracies”.

– Birjand, the Friday  prayers  Imam: “The problems do not justify pouring into the streets, bringing the people to streets and creating insecurity is the plot of enemies. The PMOI is plotting to carry out their plans. Our duty is confronting their deeds because the security of the system is the most important task.”

The main difference between the Iran uprisings in December 2017 and June 2018:

Nowadays  the fear of uprisings and overthrow,  is undermining the balance of the regime. This can be  gathered from the remarks of the authorities and   officials. Expression of fear, as well as   confession to the “Organized uprising”, are the main distinction between Iran uprising of December 2017 and those in June 2018. During the December uprisings  all the regime’s attempts were to downplay the protests and dismiss them as dissatisfaction with the economic conditions. The regime even tried to stop the publication of the news in the state-run media. But with the soaring of the uprisings in different cities and the chanting of radical political slogans against the whole regime, and widespread airing of the slogans and images in the cyberspace, the authorities reluctantly confessed to the protest uprisings and the significant role of the National Council of Resistance of Iran and its core organization, the PMOI/MEK.

The theocratic regime’s concern over the peril of the democratic alternative:

So it can be clearly understood that the fear of Iran uprising and that of a “Resolute enemy” that “organizes”, disturbs the balance of the system in its entirety.

All the official comments of the regime send the common message  of apprehension over the main opposition movement, the NCRI, and the activities of its main organization inside Iran, the PMOI, , which calls for regime change.

Mrs. Maryam Rajavi, the leader of the NCRI, in a speech delivered on June 30, in the Iranian Convention in Paris, in the presence of more than 100,000 participants, including a large number of political, religious, artistic and cultural figures from all over the world, pledged Iran’s Resistance to continue the uprisings. She said:

“This is our collective commitment and our collective pledge to the Iranian nation, to place everything at the service of the uprisings, giving them all we have and making sacrifices in all fronts, in order to advance the uprising.”