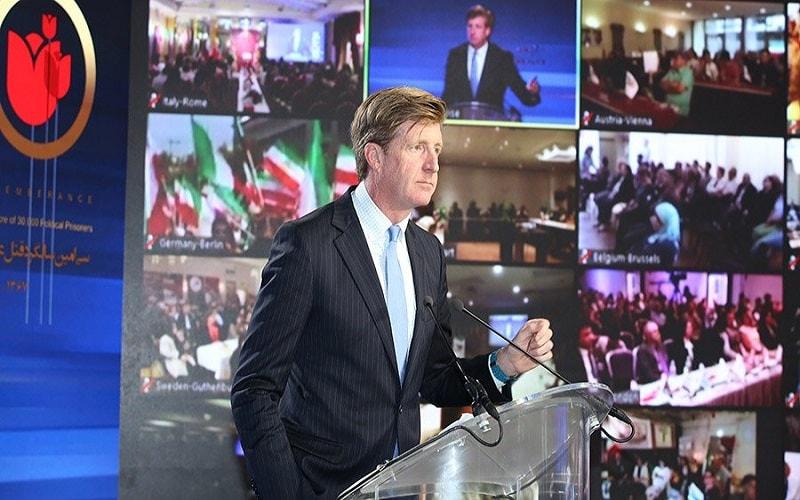 Iranian communities in 20 major cities and capitals throughout Europe and North America mark the 30th anniversary of the 1988 massacre of political prisoners in Iran with a simultaneous interactive conference, calling on the international community to support the prosecution of the mullahs responsible for the massacre and the ongoing Iranian uprising.

The gathering brought thousands of members of the Iranian Resistance and their prominent foreign supporters across the world together.

The perpetrators of the inhumane crime of the 30.000 political prisoners, many serving in Iranian regime posts now, they have to finally face justice. This is the least the families of those victims, the Iranian nation as a whole and the international community, deserves.

Mr. Patrick Kennedy the American politician who served as a Democratic member of the United States House of Representatives, gave his speech at the conference.

Mr. Kennedy at gathering to commemorate in 1988 massacre of political prisoners stated that the issue of human rights in Iran is not just a domestic problem, but a problem of the international community. He emphasized the fact that if the crime of massacre of 30,000 political prisoners in Iran could happen in modern times, it could happen anywhere else in the world too.

Mr. Kennedy pointed to the efforts of People’s Mojahedin Organization of Iran (MEK/PMOI) and Mrs. Maryam Rajavi as the source of inspirations for the anti-regime protesters in Iran and highlighted the fact that the youth reject both factions of the regime.

The other speaker in the conference was Mr. Jean-Francois Legaret, Paris First District Mayor. He condemned the silence of the international community regarding the massive killing which took place in Iran. Mr. Legaret commented, “This brutality is continuing every day. The regime must deny that such a massacre happened at all. The conscience of the International Community is silent. “