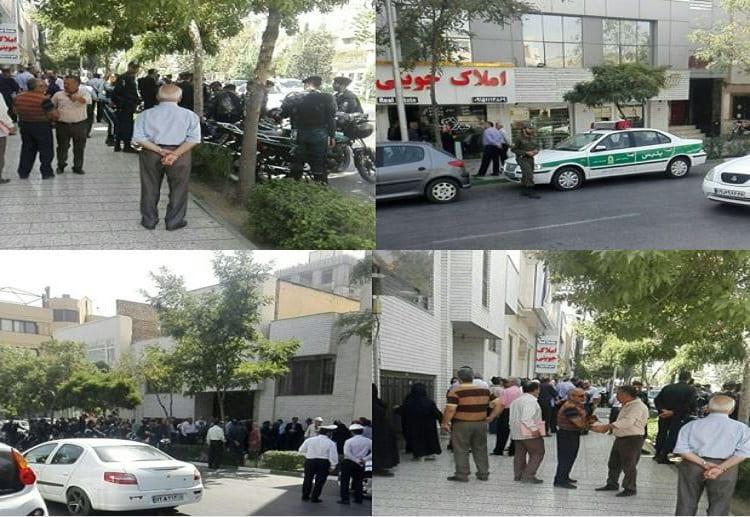 On Monday, September 10, 2018, the ransacked people by the Caspian Institute in Mashhad staged another pre-planned gathering, reiterated for times over the last month, in front of the Pamchal Branch of this IRGC-affiliated institute under an intense repressive measures. They protested against looting of their funds and not returning back it after 2 years. The protesters chanted slogans against the corrupt clerical regime:

“Some Inadequate officials have taken the offices” ,

“They have robbed our money, they lie about refunding”,

“They pretend to be religious but are honor of robbery”, and “Cry death to Seif (referring to the ex-head of the Central Bank)”.

Continuation of the truck drivers’ strike and protest in Nishapur

Truck drivers in Nishapur continued their strike in protest over the high prices of spare parts and tires and carrying freight by train instead of trucks by the clerical regime to thwart the truckers strike. On Monday, the Drivers gathered in front of the regime’s Department of Transportation in Nishapur.

A group of students at Iran Melli Iranian University (Beheshti) in Tehran met Monday to protest the dormitory closure and called for it to be reopened.

Workers of the Tolli Press Co. at Alvand city, Qazvin province, gathered in front of the company on Monday to protest to denial of their demands by the regime’s agents.

On Monday, the youths of Ashshar City staged a protest rally in front of the governor’s office at the city of Souran, Sistan and Baluchestan, concurrently a meeting of the Minister of Communications at the location.

Reports related to the general strikes in Iran

A Brief Report Of The Protests In Iran On Thursday

MEK members, massacred in 1988, for the rights of “Free election” and “Freedom of thought”