These days, Iran’s regime is surrounded by breathtaking economic crises and the nationwide Iran uprising tightening the noose around its neck. On one hand, Mullahs are facing economic downturn and catastrophic increase in inflation and the devaluation of the national currency, and on the other hand, they are getting closer to the full implementation of sanctions day by day.

Mullahs hope to escape from the deathly crises by offering Iran’s national resources, especially oil, to others in a golden tray following the offering of Oman Sea and Persian Gulf fish to China, the Caspian sea to Russia, leasing the Chabahar port to the Indians, and  preserving the  oil clients  by lowering the oil price. But the truth is that no wise man will bet on a dead horse; as a result, we are witnessing the foreign companies leaving Iran on daily basis.

The question is; are the sanctions the reason for economic pressure on the people of Iran? Or is it something else?

Will Iranians’ economic situation improve if sanctions are lifted today?

A glance at some news will help us in answering these questions: 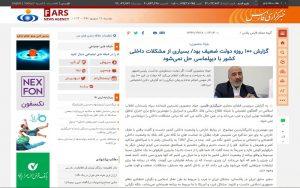 The situation in our country will not improve and our (economic) problems will not be solved, because the main reason for our problems is internal. Even if it rains gold, but we do not enjoy meritocracy and the rule of law, nothing will be solved 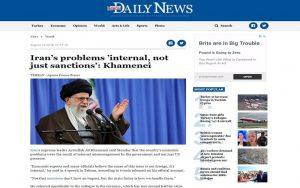 In this regard, Khamenei admitted that the country’s economic problems were the result of internal mismanagement by the government and not just because of the US pressure.”

We invite you to have a look at the Reuters investigation regarding Khamenei’s 95 billion dollars empire: Khamenei controls massive financial empire built on property seizures

What is this $95 billion spent for?

At the time when the Iranian people are in the worst economic situation, and many of them are forced to sell their body organs like kidney, liver, cornea, bone marrow, and even their young children at very low prices, to see their ends meet.

What happened to the $1.8 billion in cash that was handed over to Iran by airplanes? How much of it was spent to improve the livelihoods lives of the Iranians?

It would be better to ask how many million dollars were spent to solve Iran’s crises and economic problems, and, how many million dollars of the unfrozen money were spent for the Syrian bloodthirsty dictator, Shiite militias in Iraq, Hezbollah terrorists in Syria and Lebanon, Houthi rebels in Yemen, and other fundamentalist entities in the region?

Never forget, years ago, it was the Iranian opposition who exposed that these terrorist fundamentalists are supported by the Mullahs. On the other hand, on January 21, 2016, on the sideline of the World Economic Forum, the former US Secretary of State, John Kerry, pointed out that the Mullahs are sponsoring these terrorists groups: “There is little the United States or others could do to prevent the now-unfrozen assets from getting into the hands of the Iran Revolutionary Guard Corps or “other entities” that Iran has supported…”

Kerry told CNBC television in an interview: “I think that some of it (now-unfrozen assets) will end up in the hands of the IRGC or other entities, some of which are labeled terrorists.”

In this regard, Hassan Nasrallah admit that all the Hezbollah’s financial support comes from Iran!

Thus, these are the terrorist entities supported by the Mullahs who should be concerned about Iran regime’s bloody dollars more than the Iranian people, because the Iranian people are well aware that the main cause of the economic pressure that breaks their back, are not the sanction.

So, what is breaking their back?

The main cause is the corrupt regime and the Mafia of the IRGC, who have dominated all natural resources, mines, financial and economic institutions, and even control the personal relations and information of the people, while they have to answer to nobody; their sole aim is to survive by increasing repression inside the country and creating and exporting crises wherever it is possible abroad, whether with the nuclear weapon or without it. 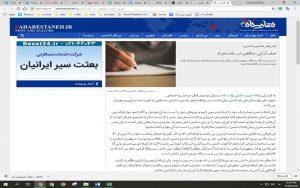 Meanwhile, mullahs have never neglected to target their sworn enemy; which was neither the US, nor Israel, nor Saudi Arabia, but the NCRI and the MEK wherever it has been.

While the regime tries with all-round effort to attract and hold European companies, it cannot refrain from plotting  and  conducting the conspiracy of a terrorist explosion to massacre exiled dissidents at the gathering of the Iranian opposition; even if it results in an international scandal and the arrest of its official diplomat.

Years ago, Victor Hugo said, “There is nothing more powerful than an idea whose time has come.”

A reality and a cause that has been followed continuously by the Iranian opposition led by Mrs. Maryam Rajavi for nearly 40 years; and we can say now, the clerical regime’s overthrow is certain and within reach more than ever.

Now is the time to put an end to the corrupt and criminal regime of the clerics and demand its replacement with a democratic, free and transparent Iran, based on Mrs. Maryam Rajavi‘s platform for future Iran.

How Does US Sanctions Weaken The Iranian Regime By Launching The Iran Task Force?

Gen. Jones, achieving the goal of prosperity is rooted in Maryam Rajavi's aspiration