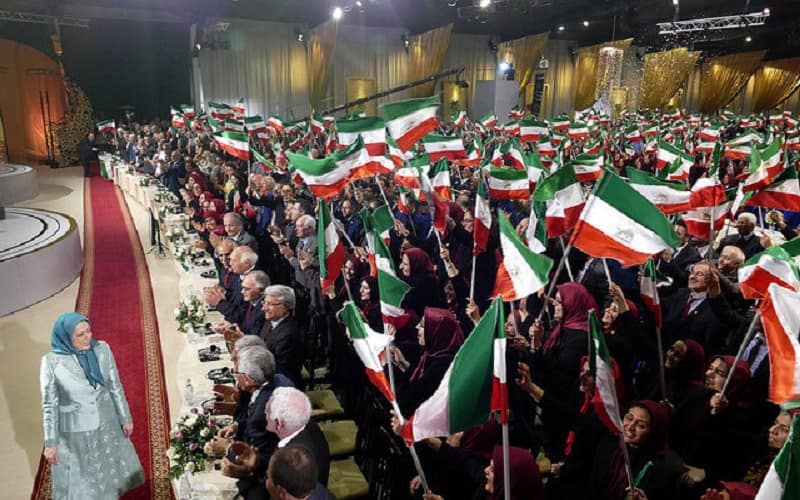 Nowadays, the noose has become tighter around the fundamentalist regime ruling Iran, and all signs indicate that the storm of overthrow is looming on it.

From a political point of view, as the figures speak, the regime has internationally become more isolated and has plunged deeper into a dire situation; consequently, a growing radical public anger has surged in an explosive Iran.

The trend of regime’s overthrow and its isolation accelerates even more. The political scene, both regional and international, is rapidly and tangibly turning against it from day to day.

Regime’s economic condition; a witness to the fact

Regarding the economy, which deals with figures, we are witnessing a situation in which the value of the country’s currency has fallen to one-third. In less than a month the value of one US dollar has risen from 100,000 to about 200.000 rials. This is not a gradual phenomenon, but a sharp fall which leads to an economic collapse, turn to social unrests and the ‘overthrow storm.’

The international and political situation

The reality is that the clerical regime’s international and political situation is just similar to its economic downfall.

Arresting the regime’s terrorists and spies in the United States and Europe, among them a high-rank diplomat, has provoked crises in the diplomatic relations between the Mullahs regime and those states that, are trying to rescue the Iran nuclear deal. At the same time the unprecedented act of closing down the regime-linked fake accounts in several global social media, such as Facebook, Twitter, Google, and Alphabet, is another blow to the regime’s malign propaganda apparatus.

The exclusion of the mullahs’ regime, from the decision-making process on Syria, by Russia and Turkey, right after the tripartite summit in Tehran, and despite all the regime’s expenditures in Syria, was a serious blow to the mullahs’ expansionism in the Middle East.

The invasion and torching of the Iranian regime’s consulate in Basra, Iraq, having a majority of Shia population, and mullahs’ acknowledgment of the fact that the attackers were furious people, indicates the regime’s deadlock in the region.

A recent article by the former Italian Foreign Minister, Mr. Giulio Terzi, is very informative. It reads: “Western powers must be united for security and democracy reasons in relation to the Iranian regime because Iran (regime) is probably the most fundamental challenge for security and foreign policy of the European people.”

Mr. Terzi referred to the Achilles heel of the regime and noted: “At the end of last year, mass anti-government protests, which were mostly organized by the MEK, spread throughout Iran, and the people chanted unprecedented slogans such as ‘Death to the dictator’. ”

Emphasizing on the ordinary people’s dire economic condition which has deteriorated since the signing of the 2015 nuclear agreement with six major world powers, Mr. Terzi stated that the demonstrations left no room for any doubt that the Iranian people decisively are rejecting the religious regime and are striving to replace it with an elected government. This new era is irreversible.

The most important fact that the uprising of the Iranian people proved is what Mrs. Maryam Rajavi highlighted in her speech at the Iranian Grand Gathering in Paris, on June 30, 2018: “ Since the January uprising, the signs of change in Iran and the regime’s overthrow have appeared. The prospects for the victory of Iran’s democratic revolution, devoid of the mullahs and the Shah are looming. Through their uprisings and by relying on resistance units, the Iranian people have the leverage they need to topple this regime.”

In conclusion, though the isolation and sanctions are economically suffocating the regime even worse than the time before signing the nuclear deal in 2015, without the Iranian people’s uprising and their organized resistance, crystallized in the National Council of Resistance of Iran (NCRI) and its main organization the PMOI/MEK, the economic pressures will not lead to regime change in Iran.

As Mrs. Maryam Rajavi has pointed out at Villepinte Gathering: “But the realities and experience have shown that this dark and evil regime will neither be reformed, nor turn ‘green’ or ‘velvet’,” and “The overthrow of this regime inevitably requires the willingness to pay the price, requires honesty and sacrifice; requires an organization and a strong political alternative.”

Now it’s up to the women and men of Iran. By forming Resistance Units in our enchained homeland nationwide, they can and will bring this regime down, restoring Iran’s freedom and glory to it.