On October 4, 2018, in Brussels, an important meeting was held by the International Committee in Search of Justice (ISJ). The meeting discussed the topic of “Iran’s New Wave of Terrorism-The EU and US Responses”. 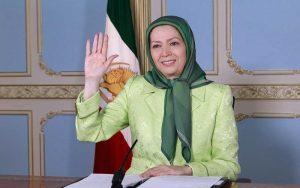 Mrs. Maryam Rajavi, the President-elect by the National Council of Resistance of Iran (NCRI), sent a video message to the meeting.

Reminding the features of the clerical regime in suppressing Iranian people and exporting terrorism, Mrs. Rajavi pointed to the regime that by using terrorism, wants to compel the world to silence and surrender. She emphasized that the best response to such a regime is firmness, as a responsible policy for global peace and security.

Mrs. Rajavi recalled the two significant changes on the international level, which have stuck the regime in a tight corner, the end to the policy of appeasement and the enforcement of stronger sanctions.

In reaction to the crises besetting the mullahs, they have stepped up their suppression at home and terrorism abroad. By resorting to terrorism, they seek to blackmail the international community.

Mrs. Rajavi stated that the regime’s diplomats were systematically engaged in terrorism and espionage. In fact, terrorism is a key instrument for advancing their foreign policy.

Remaining silent vis-à-vis terrorism is the most damaging form of appeasement of the mullah’s regime. Unfortunately, this is currently the prevalent policy in Europe. This is a mistake which costs not only the security of Iranian people but the security of Europe, Mrs. Maryam Rajavi concluded.

Mrs. Maryam Rajavi addressed the European countries to take measures to counter the thread of the main leading state sponsor of terror. She said: “I’m Speaking on behalf of the people of Iran, I say to the governments of Europe:

-Be firm against the mullas

-Make public the dossiers on their terrorist activities

-Close down the regime embassies and other centers of espionage

-Do not deal with the companies owned or affiliated with the Revolutionary Gard Corp (RIGC) and khamenei’s executive staff.

-And prosecute the perpetrators of criminal against humanity for the past 40 years in Iran.” 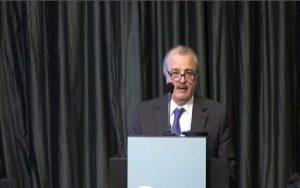 Iran regime’s sudden surge in terror operations is due to its inability to subdue the Iran protests that began in Dec. 2017 and continue in different forms. Regime’s survival is dependent on terror against its opponents and suppression at home.

It is time for EU to end appeasement. EU Council of Ministers should order the expulsion of all intelligence officers, spies, and agents of Iran’s regime. There can be no doubt the regime is engaged in terror at the highest levels.

EU and the US should blacklist and freeze all the assets and bank accounts of Iran regime’s Ministry of Intelligence and Security (MOIS) and its agents.

EU and the US should blacklist any entity, institution or company that deals with Iran regime’s Ministry of Intelligence and Security (MOIS) & its agents.

The EU should stop any deals and exchanges with Iran’s regime at the ministerial or higher levels.” 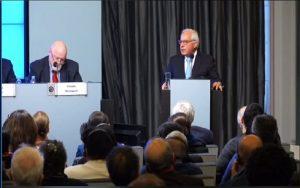 The former US Senator, Robert Torricelli, “I thank the government of France, Germany, and Belgium for their sense of duty. Many distinguished people are grateful today for the work of the law enforcement for uncovering attack on Free Iran 2018 gathering in Paris.”

“What Iran is doing is complex in the cyber world, we need diligent journalists to address this issue and to inform the public, policy makers of the threat posed by Iran regime,” Mr. Torricelli said.

He explained, “What happened on June 30, was part of a pattern not an isolated event, weeks before terrorists wanted to plant a bomb against MEK Iranian refugees in Albania,” and, “There is an emerging pattern of Iranian activities in the Western world of Iranian terrorist plans. This is the reaction to the weakness of the regime addressing the current situation in Iran with Iran Protests. It is a pattern well recognized in history as a despotic regime is under pressure. For nine months, the people of Iran are in the streets to reclaim their destiny in Iran Protests. ”

Mr. Torricelli warned that “Europeans thought that we are protected against despotic regimes,” and,

“The policy against state-sponsored terrorism is now being tested by the regime in Tehran.”

He recalled that there have been 3 terrorist plots in recent months by the Iran regime in EU and US, and under stature of the United States a terror act abroad is prosecutable by law.”

In response to those who reject a firm policy towards Iran terrorist regime, Mr. Torricelli uttered, “As a large nation, taking a firm position against Iran has an economic cost. It also has a political cost. But what are the costs of doing nothing. The government of Iran is watching. Silence invites more attacks.”

Mr. Torricelli summarized his thought in a question, “Are the great democracies of Europe to be intimidated by the dictatorship in Iran?” 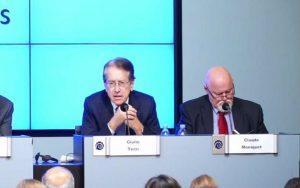 Giulio Terzi, former Italian Foreign Minister who was one of the participants at the June Rally and a possible target said that the state sponsored terrorism is something completely against the unity and that exists in the European institution.

The story expressed there were not only terror organizations in Europe, but there also associations and claiming cultural groups and … but they werter directly connected with Iran, Mr. Terzi added.

The welcome news today was that extradition of Assadi was ordered by German authorities.

Le Monde gave a very large coverage to the issued which was encouraging show the plan was to kill thousands of people at Villepinte. 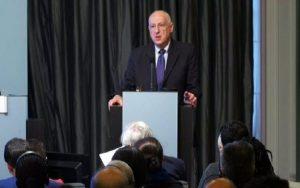 Lord Carlile, Member of British House of Lords, in his speech said, “State sponsored terrorism is ugly, must be prevented against international law and hopefully will reap the reward they deserve.”

“I have attended the great gathering in Paris but I want to applaud what Iran policy has done under leadership of Maryam Rajavi in the past year in Iran. We witness how much better Iran protests are being organized and continuing,” Lord Carlile said.

Pointing to the Iran regime’s Propaganda against the MEK, Lord Carlile uttered, “Those in Albania have also been victims of terrorism. We are also faced with Fake News regarding Iranian dissidents in Albania, if you start having doubts go and see them in Tirana to see who these freedom fighters are.”

“State of human rights in Iran must be addressed. Iran has worst proportion of executions to population in the world,” and,

“People are hung from buildings and cranes, they make the acts of 16th century Europe look humane,” Lord Carlil said.

He added that a country that executes people in mass scale is not a country we should be doing business with. 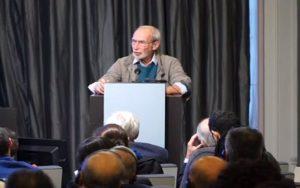 Eric David, professor at the Free University of Brussels and an expert in international criminal law was asked to address and describe the Paris terror plot as an act of state terrorism.

Professor David,”From the legal point of view, the surrender of a diplomat is not extradition but a surrender. German judicial authorities completely dismissed arguments about immunity,” and, “Interesting for the first time state terrorism is at stake at the judicial level.  The Iranian government can be described in the future decisions,” he added. 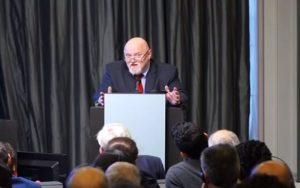 “For the first time in years, we have real evidence of the involvement of the Iranian regime in terror operation in Europe.

We had 11 bomb attacks in Paris, many were killed.  After a month some authorities found that all had links with Iran. The Iranian regime with their terrorism in France and against France forced us to expel MEK in the late 1980s.

Discussion took place in Geneva and Tehran to exit the crisis.  Iranian representatives never said they were responsible, but they posed as honest brokers.  For what was called “luggage you’ve lost.”

The order to kill Bakhtiar (the last Prime minster appointed by Shah, in Iran) was directly delivered to the perpetrator by Khomeini. Terrorism is not an accident in the history of Iran, it is a method. Terrorism is one of the tools of the Iranian foreign policy.

When they have problem, Iranian officials decide which tools to use, if terrorism is the choice, they will look what to use, Hezbollah…With Iran, appeasement is not an option. Few years ago bakhtiar killer was freed, now we have the Villepinte attack.” 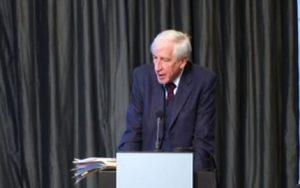 Georges Henri Beauthier, human rights lawyer and a former president of the French section of the League of Human Rights of Belgium. He represents a number of civil parties in the proceeding in Belgium regarding the Paris terrorist plot: “We are approaching to the public evidence and it will be public and everyone will see what happens in Villepinte.” 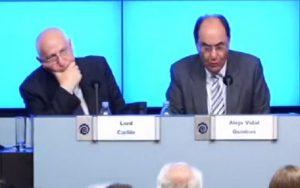 Dr. Alejo Vidal-Quadras, Chair of ISJ, and Former VP of European Parliament: Referred to the latest terror plot by the Iranian regime in which an Iranian diplomat was arrested in Germany for handing explosives to terrorists.

Alejo Vidal Quadras: “It is not a political question, but a legal question.  We have to decide this case at the justice court.  This is good news.

It is clear that the wave of Iranian regime’s terrorism is new, it is not a work of an isolated individual but a political regime, a killing machine inside borders trying to do the same outside.

The acts require approvals at the highest levels of the regime, Rouhani and Khamenei. They are not the work of a rogue individual inside the regime. That is absolutely nonsense.

EU must adopt a firm position. Federica Mogherini must break silence and condemned these terrorist activities. Appeasement does not work with Iranian totalitarian theocracy.

We must learn the lessons of history.  There are enemies who can be turned into friends and those who must be defeated. It is time to change our approach and promote regime change in Iran.”