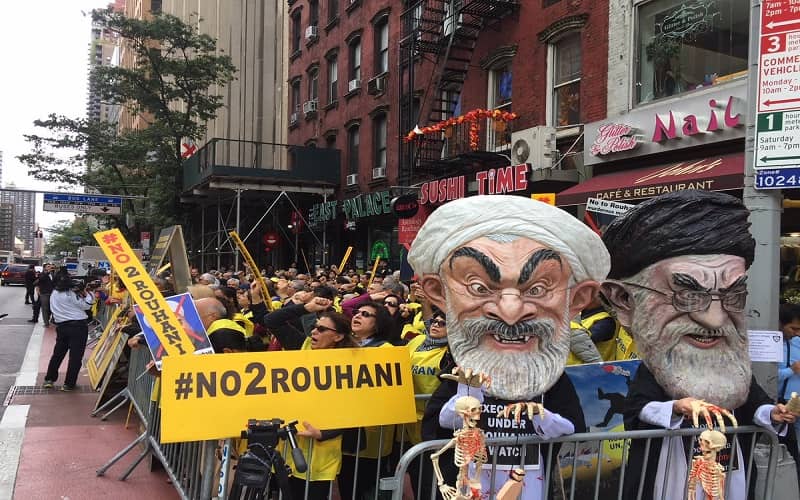 Iranians protest against the presence of mullahs' representative "Rouhani" in UNGA 2018 those announce their support of Maryam Rajavi and MEK.

The orcs were the savage and legendary creatures who brought upon horror, ruin, and darkness anywhere they went; they have not crossed any village nor a town unless they have turned it into ashes. Actually, I do not know if these anti-human creatures really existed or not, but in our era, I know some creatures that resemble orcs and remind us of them. Of course, they justify their crimes on the pretext of religion and under the name of GOD, although they are hundreds of times more insidious and more evil than the orcs. Yes, we are talking about the mullahs ruling Iran and in fact, they are signs of the evil spirit of Satan.

The same evil spirit that has perished Iran’s talents, elites, and human assets (the young and educated) across several generations. These Mullahs are the record owners of execution (in terms of population) and they have turned Iran into journalists’ jail. Mullahs also have reduced the age of addiction to ten; they have arrested, imprisoned and tortured hundreds of thousands of freedom activists, and executed 120,000 of the best young men and women of Iran. These anti-human creatures executed 30,000 political prisoners just within a few weeks, most of them supporters of MEK because they did not accept to deny this organization.

They destroyed the lives of millions of Iranians and Iraqis by lengthening the ruinous Iran-Iraq war for 8 years. Mullahs destroyed the industry, economy, agriculture, water, and environmental resources and ancient monuments of a rich nation with a multi-thousand-year civilization by giving the governmental positions to the incompetent and negligent people.

These bloodthirsty creatures have plunged all of the Middle East in war as well as ethnic and religious conflicts; they have also wasted the funds and wealth that belonged to the Iranian people on terrorist adventures and nuclear bomb-making projects. Worse, they have spent the wealth of the Iranian people to suppress them and to enhance the regime’s repressive system; lest the people would not protest, and the sound of their protests would not discomfort the Mullahs.

It is so absurd that the representative of these evil creatures whose honor is to deceive the international community, once again spoke addressing it; perhaps with some modernized deceptions!

Of course, these insidious creatures could never deceive the Iranian people, especially the Iranian opposition, whether these mullahs have white turban or black, or are called moderates or hardliners!

In this regard, the Iranian opposition held a summit in New York  on September 22, with the presence and speech of the former US national security advisor, General James Jones; the former mayor of NY, Rudy Giuliani; the former French foreign minister, Bernard Kouchner; and the former US Attorney General, Michael Mukasey. A large crowd of the Iranian-American community participated. The Participants declared their support of Iran’s democratic alternative led by Mrs. Maryam Rajavi for a democratic change and for establishing a free Iran.

The summit aimed at introducing and recognizing the democratic alternative to the Iran regime, the National Council of Resistance of Iran (NCRI), and supporting the protests and uprisings of the Iranian people, which began in early 2018 with a clear demand for “Regime change” in Iran.

In a video message addressing the summit, Mrs. Maryam Rajavi highlighted the PMOI‘s role and the role of the resistance units in leading the Iranian’s struggle for freedom and justice, and the obligation of the international community to stand with Iranian people.

Today, in fact, all Iranian, anywhere in the world, follow a common goal; replacing the religious fascism with a democratic and free Iran. The international community should respect Iranians’ determination and expel the terrorist diplomats of Mullahs’ regime from the UN.

Mrs. Maryam Rajavi ended her speech emphasizing on this goal and the struggle for it, concluding:

“Iran’s seat at the United Nations does not belong to the terrorist regime ruling Iran. That seat belongs to the Iranian people and their Resistance.” More…

Rouhani Striving In Vain To Overcome The Crisis