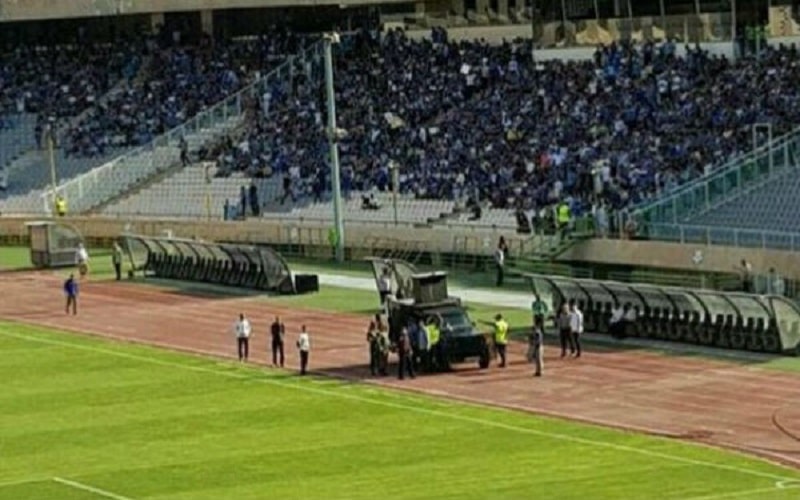 Before looking at the actual content of Khamenei’s latest remarks, it is important to consider the reasons behind his decision to speak to the Para-military Basij forces at the Azadi stadium in Tehran.

As the mullahs’ regime finds itself increasingly more surrounded by international and domestic crises, including streets protests and economic and social breakdown as well as facing worldwide isolation, Khamenei’s suppressive forces find it hard to see any light at the end of the tunnel for themselves.  Therefore, it becomes imperative for the supreme leader to try to gather his forces and give them some hope.

The supreme leader admitted during his speech that the current conditions in the country are very sensitive to the regime. While he acknowledged the hard economic conditions for the people and the tightness of livelihood for a large portion of the country’s population, but he still claimed that his regime is not at a deadlock.  That is despite the rising tensions between Iran and the international community following May 2018 decision by US President Donald Trump to withdraw from 2015 nuclear agreement between Tehran and world powers.

The U.S. administration re-imposed more economic sanctions on the Iranian regime last month.  These sanctions were lifted under the nuclear deal in exchange for a curb on Tehran’s nuclear thirst. The second round of penalties targeting Iran’s oil exports is due to come into effect early November.

At the moment, the sanctions have sent Iran’s economy into a spiral downfall with its national currency, rial, hitting record lows.

For this reason, Khamenei tried to warn his supporters against the “enemy” saying that the “enemy has fully lined up in front of them.”

As usual, he blamed the enemy for his regime’s troubles and threatened that anyone advocating more negotiations with the “enemy” will be considered a traitor.

In his seventy-minute speech, Khamenei offered absolutely no solutions to the difficulties engulfing his regime or for the sensitive situation he was speaking about.   He did not deliver any remedy to the downward falling value of the national currency or the high costs of livelihood for the majority of the Iranian citizens. And, he certainly suggested no resolutions to the international isolation that is chocking his regime due to warmongering policies he has pursued in the region and his missile and nuclear programs.

In short, during his 70 minute speech, Khamenei was only attempting to show that his regime is not at a deadlock.  “In spite of the pressure, you endure,” Khamenei reiterated, repeating claims, such as the so-called Islamic Republic’s might and invincibility.

More than anyone else, the absurdity of these claims is apparent to Khamenei himself.  “These aren’t saber-rattling. They are not mere slogans. They are not hollow words like those uttered by others.”

But for those people who deeply feel the dire economic and social conditions, Khamenei’s claims are nothing but total deceptions. The situation has become so disastrous for the fundamentalist regime now, that all signs indicate the coming of a storm that will lead to the downfall of the mullahs’ rule.

After Several Weeks Of Silence, Khamenei’s Remarks Showed That He Has No Way Out Of His…

People Writing On Walls In Iran: Death To Khamenei, Death To Rohani

President-elect Maryam Rajavi; the Star of Hope in Iran’s Sky