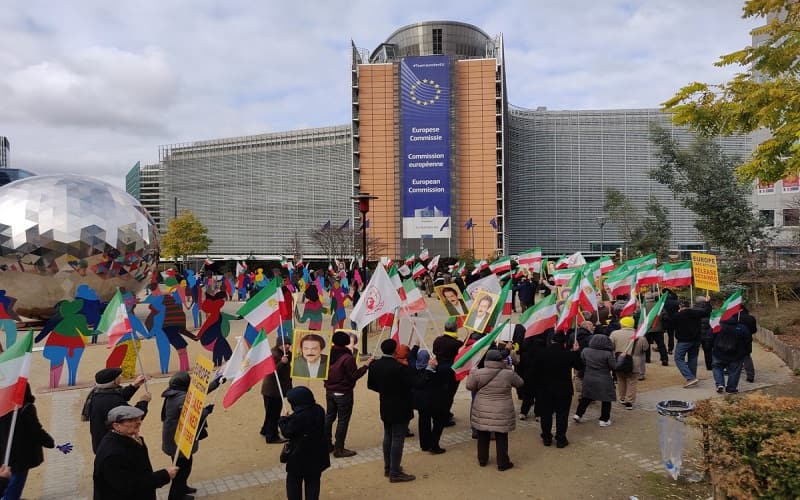 NCRI supporters gathered in Shuman Sq. in Brussels in front of the EU Headquarter on Monday, Nov. 19, 2018. They demanded EU to acknowledge that the regime of Iran is a terrorist regime.

The supporters of the Iranian resistance (#NCRI) gathering in front of EU in #Brussels asking for adequate measures against Iran state sponsor terrorism.#BlackListMOIS#ExpelIranDiplomatTerrorists #Iran https://t.co/iMn61HmfPY pic.twitter.com/suYnZM570z

Iranian resistance supporters addressed EU and called for serious measures regarding the wave of terrorist plots in Europe masterminded by the Iranian regime.

NCRI supporters pinpointed these plots as serious threats for the European citizens and global security.

the NCRI supporters underscored “Iranian embassies act as a cover for the planning and execution of terrorist operations in Europe.”

They added: “In the past few months, an Iranian diplomat has been arrested and others have been expelled from France and the Netherlands for their involvement in terrorist plans. That is why we are calling for the closure of Iranian embassies on European soil and the expulsion of all Iranian terrorist diplomats.”

NCRI supporters cited: “Albania, France, and Denmark have fortunately foiled terrorist plots of the Iranian regime on their soils, but these plots cannot stay without the answer. We urge for more pressure and for sanctions against Iran regime.

The demonstrators recalled that on October 30, the Danish intelligence services accused Tehran of preparing an attack against three Iranians residing in Denmark.

They also pointed to a joint statement by three ministers of France, stating: “An attempted attack in Villepinte was foiled on June 30. An incident of such gravity on our national territory could not go unpunished.”

The protesters also denounced the EU’s silence on the “massive human rights violations” and “waves of executions” in Iran.

It is to be mentioned that on Nov. 15, 2018, The Third Committee of UN General Assembly condemned the human rights violation in Iran by adopting the related resolution sponsored by Canada.

In this resolution, the committee has expressed its concern over the high number of executions, dire prison conditions, torture and arbitrary arrests in Iran.

MEK Rally In Brussels, European Union Must Enlist The MOIS As A Terrorist Organization