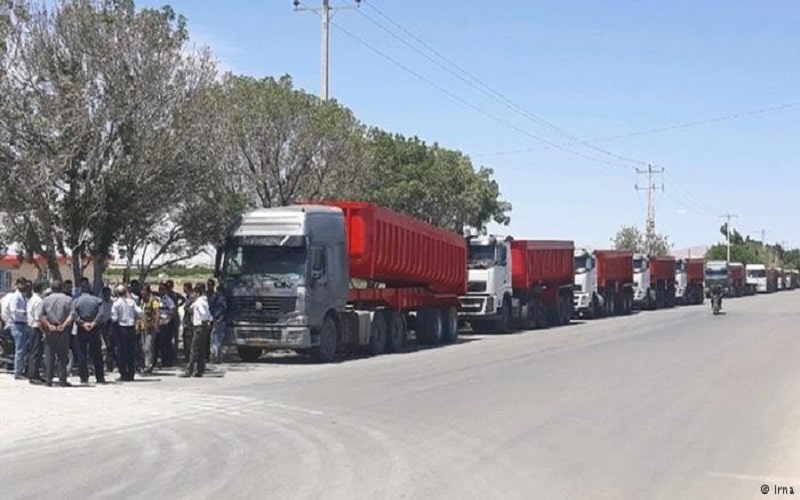 The Truckers’ nationwide strike was launched for the fifth round on Saturday, Dec. 22, in numerous cities in Iran. This pre-organized strike; scheduled for 10 days, will be continued until December 31. In many cities, most of the loading stations have become empty and the truck drivers have not shown up for new deliveries. The loading terminals in Isfahan, Bandar Abbas (South), Khomeini Shahr (Isfahan Province) and Zanjan (north-west of Tehran) are among the locations that are closed down. Tabriz and many more cities are currently on strike and other cities are expected to join the strike.

The truckers are protesting against deteriorating work conditions, low paychecks, decreasing wages, high prices for spare parts, unfair policies of governmental institutions and not receiving any responses to their demands.

Video footages from various cities show the truckers lining up their vehicles along the streets and refusing to load or move.

In cities such as Sabzevar (NW), Malayer (W), and Nahavand City, protesting drivers were seen standing on the road and blocking the loaded trucks passing by.

According to eyewitness reports, truck commutes are halted in many of the country’s highways.

Although the truckers’ nationwide strikes have the potential of a crippling the regime’s ailing economy still, the authorities have failed to meet the just demands of the Iranian truckers to prevent the strikes. The truckers like many other strata of the nation are finding it harder to make ends meet on daily basis. The Iranian regime’s corruption and mismanagement of the economy have affected the lives of Iranians of all walks of life.

Since the beginning of 2018, we have witnessed five rounds of the truckers’ nationwide strikes.

The second round of the truckers’ nationwide strikes started on July 23 and swiftly turned into popular demonstrations in Isfahan’s Shapur City.

The third round of the truckers’ nationwide strikes, which was launched on August 25, was very characteristic in making strong links with other strata and enjoyed vast support from people across Iran. The drivers carried out demonstrations in front of governors’ offices in some provinces.

On September 23 we witnessed the fourth round of the truckers’ nationwide strikes sweeping more than 200 cities across Iran in five days. It quickly gained national support. Despite the official’s efforts to divert the public attention from the strikes into simultaneous political developments, the truck drivers succeeded to keep the strike alive.

After four rounds of strikes, the truckers are now more organized and experienced.

The newest round of the truckers’ nationwide strikes began while many drivers had stopped working in previous days and were practically on strike.

The officials did not keep their promises; the problems of the drivers remain unsolved but they have a powerful tool in their hands to cripple the mullahs’ economy and make it yield to their demands; the nationwide strike.

Resistance units’ activities in Iran, on the occasion of the Student Day

Christian Citizens Celebrate Christmas Under The Boots Of Tyranny