Recognize the only viable alternative and its leadership 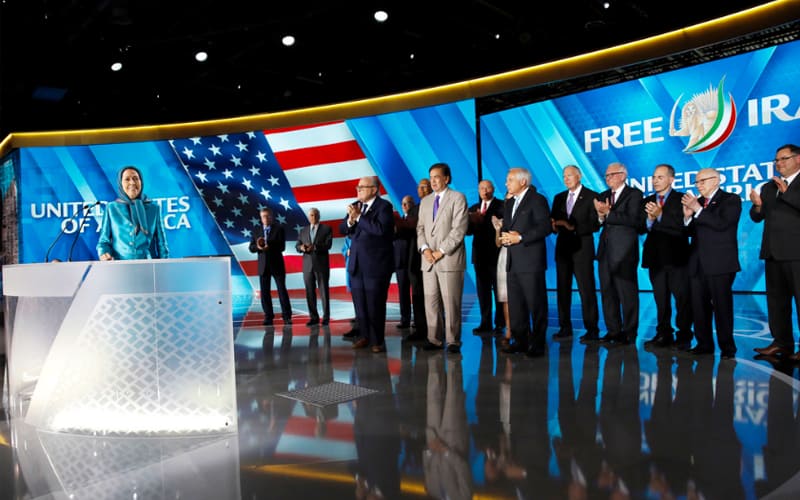 Iran revolution in 1979 was hijacked. Khomeini was the culprit. Thus a revolution which could result in, and be the source of peace, stability, and tranquility in the region, and a democratic government for its people went astray. The determining factor was “the leadership”.

Now on the eve of Warsaw Summit, once again the world is focusing on Iran, facing another historic choice.

To learn our lessons from history, this summit must focus on “the leadership” for Iran.

40 years ago the true leaders of the revolution, Mr. Massoud Rajavi, and other revolutionaries were enchained by the Shah’s regime so Khomeini got the opportunity to hijack the revolution bringing so much devastation to the world. But now the true leader of Iran’s new revolution which has paid the price of her honesty and has proved herself and her resistance to being candid and loyal to people and to peace and stability of the region, not in words but in courts, is at hand: Mrs. Maryam Rajavi and the coalition of NCRI (National Council of Resistance of Iran) that she leads.

PROSCRIBED ORGANISATIONS APPEAL COMMISSION (POAC) ordered that Secretary of State lay before Parliament the draft of an Order under section 3(3)(b) of the 2000 Act removing the PMOI from the list of proscribed organizations in Schedule 2.

On December 12, 2006, the court said the EU’s designation of the MEK (PMOI) as a terrorist group was unlawful because the Council had failed to substantiate its allegations of terrorism against the resistance organization.

On September 16, 2014, the French prosecuting judges also dropped all charges against Iranian dissidents after the 11-year probe

“The Secretary of State has decided, consistent with the law, to revoke the designation of the Mujahedin-e Khalq (MEK) and its aliases as a Foreign Terrorist Organization (FTO) under the Immigration and Nationality Act and to delist the MEK as a Specially Designated Global Terrorist under Executive Order 13224. These actions are effective today. Property and interests in property in the United States or within the possession or control of U.S. persons will no longer be blocked, and U.S. entities may engage in transactions with the MEK without obtaining a license. These actions will be published in the Federal Register.”


The MEK (PMOI) should never have been designated a terrorist organization and was listed as a FTO not because of any evidence, but as a means to curry favor with Iran’s clerical regime. Prior to the US delisting in 2012, the UK, France and European Union had removed the PMOI from their terrorist lists.

Why should the Warsaw Summit recognize this leadership? If you don’t know her and her resistance just refer to the regime’s officials and hear them. In all their words they admit that their true adversary is Madam Rajavi and her resistance.

Ali Khorram, the Iranian regime’s former UN ambassador, warns about an international consensus taking shape and expresses his concern about Iran’s isolation at a global level: “If Mike Pompeo succeeds in transforming the propaganda summit of Poland into a political summit, it will be the prelude for a military coalition against Iran. All the involved parties are swiftly putting aside their opposition to US on this issue and are turning to an enemy of Iran”.

According to state-run ISNA news agency, a few days earlier, Alaeddin Borujerdi, member of the security commission in the Iranian regime’s Majlis (Parliament), drew a connection between Poland (Warsaw) summit and the PMOI and said: “Recently, among anti-[Iranian] regime policies by European countries under U.S. pressure, we’ve witnessed the transport of PMOI to Albania and some other scenarios by European countries, that show these U.S. policies is supposed to continue.”

In an interview with Arman newspaper on January 19, Fereydoon Majlesi, a former Iranian diplomat, also says: “John Bolton, [U.S. President Donald] Trump’s National Security Advisor, and [Mike] Pompeo, U.S. Secretary of State, have also said that the sanctions against the [Iranian] regime must continue to the point where this country [Iran] is crushed! They’ve used a term that’s not usual in diplomatic parlance.”

And if you turn to the people, the growth of the Resistance Units, the members of the MEK/PMOI networks inside Iran, the revelations of regime’s atomic ambitions and its destructive missile program and … well shows the support that this resistance and its leadership is enjoying inside Iran.

This resistance and its leadership not only enjoys the support of the Iranian people inside Iran but the Iranian diaspora abroad rely on it as the true alternative to the mullahs regime and show this in their support at various rallies and conferences in which many international officials and personalities also lend their support to her and the resistance under her leadership. Yet another sign of the support this leadership and her organized resistance are enjoying worldwide.

So our advice to the participants of Warsaw Summit:

As you will again witness in the coming rally of Iranian dissidents in Warsaw, simultaneous with the Warsaw Summit, the people of Iran and the world demand that you make the right decision. Don’t repeat your mistake again.

Recognize the right of Iranian people to resist this theocratic dictatorship. Recognize the Iranian resistance and its leadership, Mrs. Maryam Rajavi as the true alternative to this regime and save the world and yourselves of another 40 years of human rights violation, the spread of terrorism, warmongering, floods of refugees, atomic bombs and long-range ballistic missiles in the hands of a rogue terrorist regime and…

Make the right choice, choose the right leadership and recognize her.

On behalf of the Iranian Resistance, which has called for an arms and oil embargo against the mullahs’ religious dictatorship since 1981, Maryam Rajavi reiterated the need to take the following steps:

1. Recognition of the Iranian people’s right to resistance to overthrow the mullahs’ religious fascism and achieve freedom;
2. Designation of the Islamic Revolutionary Guard Corps (IRGC) and the Ministry of Intelligence and Security (MOIS) as a whole as terrorist entities by the U.S. State Department and the European Union;
3. Expulsion of the mullahs’ intelligence agents and mercenaries of the terrorist Qods Force from the U.S. and Europe;
4. Referring the dossier of human rights violations in Iran to the UN Security Council after 65 United Nations censures;
5. Supporting the referral of the dossier of the 1988 massacre of political prisoners in Iran to international tribunals;
6. Ouster of the mullahs’ illegitimate regime from the UN and recognition of representation by the Iranian people’s just Resistance;
7. Decisive expulsion of Iran’s ruling religious fascism and its forces from Syria, Iraq, Yemen, Lebanon and Afghanistan;
8. Compelling the government of Iraq to pay compensation for the properties, equipment, arms and camps the PMOI/MEK and the National Liberation Army of Iran (NLA), which had fully paid for them and whose evidentiary documents are available.