Rudy Giuliani in Warsaw “Iran resistance is run by a woman” 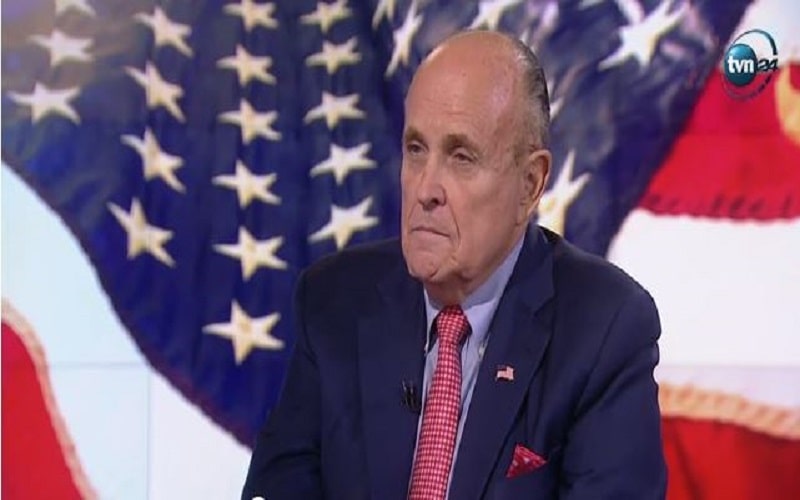 Rudy Giuliani in Warsaw “Iran resistance is run by a woman”

Rudy Giuliani in an interview with Poland TVN24 said: “Well I’m sure there will be a very good conference. This is a conference on peace in the Middle East, and the major focus is going to be on Iran and I think that’s a very appropriate focus because the major problem in the Middle East is Iran. They are the biggest state sponsor of terrorism. They spend more money they give more arms they give more help to terrorist groups around the world to foment trouble than any other country in the world.”

Rudy Giuliani in Warsaw added: “The fact is because President Trump was brave enough to re-impose sanctions and because he blew up that terrible agreement, Iran is now suffering the consequences of their nuclear ambitions and the country is in dire economic straits.” He said: “There are protests every day, in last year protests took place at least in168 cities. It doesn’t get reported by the media. Particularly here in Europe because there’s certain protection of Iran that goes on. But there is a really unstable situation in Iran right now.

About the goal of the summit that Rudy Giuliani in Warsaw expected to achieve, he said: “We’re trying to get the European countries to take as hard and firm a position against Iran as the United States does. You know President Trump reverse the disastrous policies of President Obama which basically were much worse anything Europe did they funded that we gave them billions of dollars or more, which was totally absurd. So President Trump had a reverse that immediately he did. He’s put them on the defensive.

The situation is that there are a tremendous number of protests going on and the group that I’m with them, here I’ve been with them for 12 years, along with 70 Republicans and Democrats, all of us out of office, very interested in peace and very interested in a democratic Iran that respects the rights of women, which can have a peaceful democracy. The MEK is an alternative to that government. Madam Maryam Rajavi is the president of MEK. Think about that, this is a group that wants to seek democracy in Iran and it is run by a woman, and she’s not the only woman in the group, a lot of the leadership of this group are women.”

About his stance on Iran regime change, Rudy Giuliani in Warsaw stated: “Let me make a distinction here that’s important. My government would like to see Iran change. But my government, meaning the State Department, the president has not spoken out for regime change. So now I’m speaking for myself and I’m speaking for the group of people including people like the former heads of the Joint Chiefs of Staff, Patrick Kennedy, numerous Republicans and Democrats, Bob Torricelli, Democratic senator.

We are in favor of regime change, it is the personal position of mine, mine’s not a government position, and I’m not with the government. So I’m free to have my own personal opinion. I’ve been for regime change for 12 years. I believe it’s the only way to get a free democratic peaceful Iran. The Mullahs, the ayatollah, they are homicidal maniacs, or they’re crooks or both.”

The group of people that are there now, were enriching uranium while they were lying to the inspectors. They were caught in 2003 and in 2005. They were caught by the group that I work with, the MEK. They’re the ones who identified the mountain where the uranium was being enriched and Iran (regime) was lying about it. I’m certain Iran (regime) has a backup plan and is right now enriching uranium and there’s no way that these inspectors are going to find it. They didn’t find it in the past. Why do we think they’d be finding it now!?”

Regarding the report of the US intelligence that supposed Iran regime was not working on a nuclear weapon, Rudy Giuliani in Warsaw stated: “There was an official report in 2003 and there was a report in 2005 and it was dead wrong. The source of the viable information is a country that would continue to support the most vicious murderous terrorist groups in the world cannot be trusted. You cannot trust them. And no inspection of the world is going to give you the information you need. It’s a very big country. They fooled us before. They fooled us twice before. There’s no reason that they wouldn’t be doing the same thing now.”

About the next necessary steps regarding Iran regime, Rudy Giuliani clarified: “Next step is to impose substantial sanctions on them. The way we did to South Africa and turn South Africa from an apartheid regime to a democracy. They have to change. We can’t tolerate a major country in the world that has nuclear ambitions. Even if they follow this agreement in 10 years they’ll be a nuclear power, that’s unacceptable. A country that has murdered hundreds of thousands of people, a country that doesn’t allow women basic rights, a country that is a religious maniacal regime, cannot have nuclear weapons. It also has to be stopped in its support of terrorism. It has to be stopped immediately. It’s into a vital region of the world. It imperils not only Israel, Saudi Arabia, the Arabian Peninsula, it is not only moving into areas like Syria, It’s trying to create an empire. Read what they write. They want to export radical Islamic government.”

Answering the question on the risk that Poland has taken by organizing Warsaw summit, Mr. Giuliani first replied that whether Poland would be blackmailed or not, then added: “ over the last year I’ve spoken to two conferences to the MEK. Both of them were targets of Iranian bombings. The first one was in Albania, three people were arrested, one of them, Iranian, and they were getting ready to bomb that conference in Albania.

As a result of that, the Albanian government throughout the Iranian ambassador threw him out. They didn’t coward of them. They threw them out. Last June in late June, I spoke at a rally in Paris, 100.000 people along with, Newt Gingrich, number of other American and European former government officials. Four people were arrested in Belgium. That case is going on right now. They had plans for the rally, they had bombs. One of them was an Iranian diplomat. They are being prosecuted now, I think in Belgium, Germany, and France.

We have another case in America where they sent someone there to kill an operative or a person who was involved in the Iranian dissident movement.

These people are murderers. They’re killers. Europe has closed its eyes to them. Maybe because of the financial situation. They do have a substantial amount of money and you can cut some pretty good deals with them. You have to cut deals with people who have blood on the hand.”

Regarding the correct stance of Poland which is a member of the European Union in case of difference between the US and Europe on Iran regime, Rudy Giuliani in Warsaw stated: “My advice as a lawyer, I hope you know decent and moral public official, you do the right thing and always stand on the side of democracy and decency and human rights and the rights of women and the rights of children. Iran (regime) stands against all those. Iran (regime) is the most murderous regime that I know, at least in this part of the world. They have killed hundreds of thousands of people, if not millions, 120.000 members of the MEK have been slaughtered by the ayatollah’s regime. So it doesn’t take much to stand up against them.