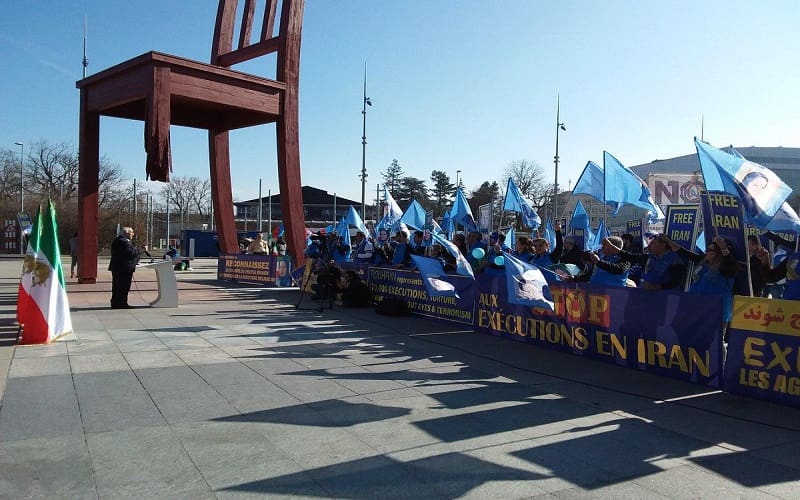 On Feb 26, 2019, a great number of supporters of Iranian opposition (NCRI/ MEK/PMOI) held a rally to condemn violations of human rights in Iran.

The participants in the rally In Geneva carried posters of those who have been executed by the mullahs’ regime through 40 years of its tyrannical rule.

Iranian opposition (NCRI/ MEK/PMOI) supporters called on international community to “Expel Iranian diplomat-terrorists from Europe.” They also called on Europe for proper action to prevent further terrorist activities by the mullahs’ regime in the European soil.

At the vicinity of the European headquarters of the UN in Genève, the Iranian opposition supporters (NCRI/ MEK/PMOI) gathered to reject the crimes of the mullahs’ regime. They set up an exhibition on the subject of the 1988 massacre in Iran

Iran is one of the worst violators of human rights in the world, where the women are under horrible suppression and routine gender segregation at universities, factories, buses, and workplaces.

Iranian regime’s officials are the culprit in the crimes of 120,000 political executions, torture, stoning, gouging out eyes, terrorism, and development of the weapon of mass destruction (WMD). Therefore the Iranian regime’s representatives have no place at the United Nations and Human Rights Commission.

The international community must open an investigation into the execution of political prisoners, particularly 30,000 political prisoners in 1988, and other crimes such as violation of human rights, and warmongering policy in the Middle East.

The Iranian Demonstrators in their rally in Geneva promised that all the mullahs’ agents will soon be in a tribunal in which they will be held accountable for their crimes against humanity.

Iranian supporters also announced their support of resistance units (PMOI’s network inside the country) during their rally in front of the UN Human Rights Office; while waving Iranian flags and chanting the slogan “Resistance units, we support you.”