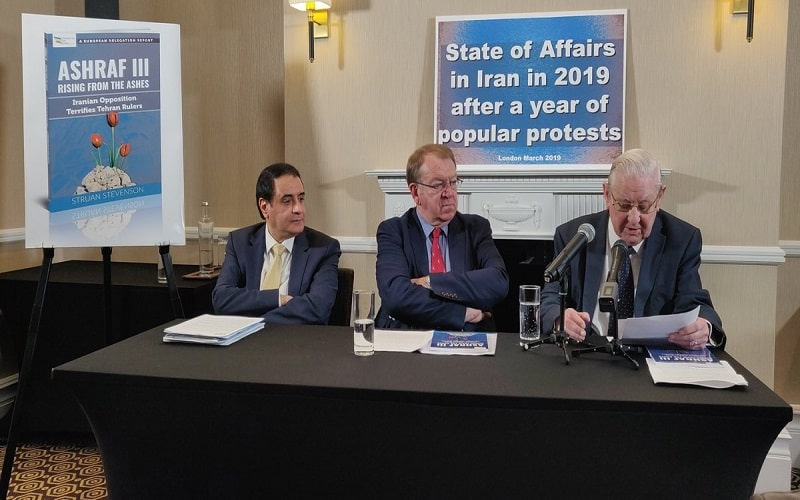 March 5, 2019, a press conference under the title of ‘State of Affairs in Iran in 2019 after a yare of popular protests’ held in London.

Mr. Hossein Abedini a member of Foreign Affairs Committee of the National Council of Resistance of Iran and Expert on Iran’s Nuclear Program, Lord Clarke CBE, former Chairman of Labour Party Joined Mr. Struan Stevenson who launched his new report “Ashraf III Rising from the Ashes”. Mr. Stevenson the coordinator of the campaign for Iran change visited the Iranian opposition center, Ashraf III, as he led a European delegation, and spoke with the residents to hear their stories as well as observing the progress they have made in setting up their new home.

The European delegation prepared a report, which recalls the suffering of several thousand men, and women members of the Iranian democratic opposition, People’s Mojahedin Organization of Iran (PMOI/MEK). They were living in exile in Camp Ashraf and later Camp Liberty in Iraq. After the withdrawal of the US military, they were left at the mercy of the vicious Iraqi Prime Minister Nouri al-Maliki and his masters in Tehran. Finally, the tiny country of Albania agreed to provide them with a safe haven in Tirana.

Now the Ashrafis have a home (“Ashraf III”) and have made friends with the local Albanians. Their fortitude and stamina have acted as a beacon of hope for the 80 million beleaguered citizens of Iran who hope and pray for freedom from oppression and now look to the MEK as the harbingers of a future of democracy, justice, and peace.

Ashraf III rising from the ashes

The report goes into some detail of the chaos that has engulfed Iran, leading to the first anniversary of the nationwide uprising. It shows how the clerical regime has reacted with brutal force, killing, imprisoning and intimidating the Iranian population, rather than seeking to resolve the crisis. The report shows how the mullahs have reacted to the threats to their regime by ramping up their sponsorship of international terror and cyber warfare, as well as a demonization campaign against their main organized opposition.

The report is highly critical of the EU’s High Representative for Foreign Affairs – Federica Mogherini – for her continued attempts to ignore the blatant abuse of human rights that take place in Iran on a daily basis.

Partial of speeches of the participant at the conference in London:

Struan Stevenson: After 40 years of dictatorship, today 80 million Iranians have had enough. For 14 months, people have taken to streets protesting the fascist clerical regime.

The Iranian people have lost their fear of demanding “regime change.” We have a regime that has executed 4000 only during so-called moderate Hassan Rouhani.

Only 2 days ago, Iran appointed Raisi, the notorious executioner of thousands only for their support for the People’s Mojahedin Organization of Iran (PMOI/MEK). How can we have a dialogue with a regime that appoints a man with such atrocities to head of judiciary?

Raeesi was a prosecutor in 1988 and was one of the four on death commission responsible for the killing of 30,000 people. Under his jurisdiction, people were subjected to only three minutes of the hearing. Supporting the MEK only meant their death immediately.

The regime plotted to bomb a rally in Paris. I was at that rally. Several other terror plots were perpetrated by Iranian regime agents in Europe

But despite all that, we still have Europeans trying to sign trade deals with Iran as part of appeasement policy. These countries have shamefully setup INSTEXT to bypass US sanctions in a somewhat barter system.

The sudden resignation of Zarif and the uprising show the fragile status of the regime. Solimani (the commander of the terrorist Qods force) insistence on Zarif’s reinstatement, show how these two working together on Iranian foreign terrorist organization.

Following airlift of over 2000 Iranian dissidents, the mullahs couldn’t tolerate it and sent dozens of agents to Albania, planning bomb plots and assassination plans.

Mrs. Maryam Rajavi and her people build a whole city in a matter of months. Ashraf. That is why I call it (“Ashraf III”) rising from the ashes.”

In his remark at the Press Conf. in London Struan Stevenson highlighted Iran regime’s intensified repression at home since the so-called “moderate” Rouhani took office and the recent surge in the number of Iran-backed terrorist plots and propaganda campaign against the NCRI.

Senior Iranian official who are known terrorists are being banned from US. These are the people that we think it is ok to have dialogue with and trade with.

To see Rouhani so-called being a reformist trying to deal with the west, you can see this is just rubbish. During his presidency 4000 have been executed. People are being hanged on cranes sold to regime by Italy.

Mr. Hossein Abedini: Moderation of the regime has been an invalid claim. Last summer Rouhani put an end to this. He assigned his intelligence ministry to carry out a terror attack against Iranian opposition.

Reza Amiri Moghaddam was the head of Iran delegation to Iraq, came to Europe and engaged directly with Assadi to plot a terror attack in Villepinte.

Qasem Soleimani is using a diplomatic passport to travel to foreign countries.

Exposing Iranian agents who used diplomatic passports and immunity to plot and carry out terrorist attacks on European soil and other foreign countries.

It is not a secret anymore that all Iran regime departments from Rouhani and Zarif, they are all involved in terrorism and there is no difference between sections. Zarif is the “smiling face of a terrorist”.

It is time for Europe to listen to people of Iran and blacklist the MOIS and IRGC as foreign terrorist organizations.

The Iranian regime only understands the language of firmness. UK government listing Hezbollah which on the payroll of Iran regime is a good move but not enough.

About the rule of the Iranian resistance units and the appointment of the Reisi as the head of mullahs’ judiciary, I think the regime is in a much weaker position. Bringing murderous mullahs in power will not help.

Lord Clarke of Hampstead CBE at the Press Conf. in London: Amnesty International called the year 2018, a year of shame for Iran. Its report says that more than 7000 dissidents were arrested last year in a sweeping crackdown showing that UK Gov’t must support the people and their Resistance, the NCRI.

I welcome Struan Stevenson’s report because it raises the truth and important role of the Iranian Resistance Movement that is not covered by the press and not widely known to MPs.

Lord Clarke added: After one year of popular protests in Iran against the regime, the world and Iran experts now understand and admit that the people want genuine change and freedom.

‘Human Rights Record in Iran in 2018’ discussed in Geneva