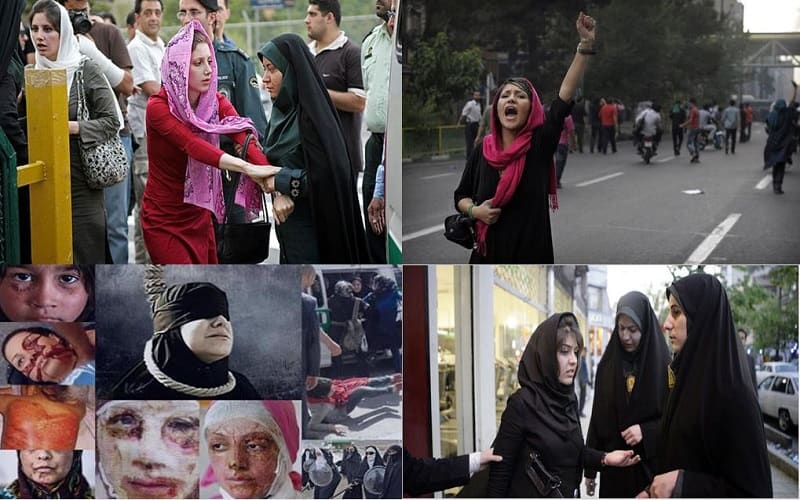 In many countries women are still victims of oppression and violence. Iran is a prime example.

As we prepare to celebrate the International Women’s Day, violence against Iranian women continues to be part of their daily lives.

It is now 40 years since the Islamic fundamentalism ruling Iran has placed acrimony towards women at the core of its villainy and through their oppression it intimidates the whole Iranian society. Forty years of mullahs’ regime atrocity against Iranian women serves the security of and is of ‘ideological’ value to this theocracy.

In the worldview of male-dominated regime of Velayat-e faqih, women are considered an incomplete creation to be pushed to the sidelines and to obey their male masters. They cannot even wear their choice of clothing.

The situation of women in Iran is terrible. Women are not just victims of unhuman pressures imposed by the government. The bitter truth is that the laws of the Islamic Republic based on mullahs’ interpreted Sharia, justifies discrimination against women. In Iran, government officials do not view women as equal to men before law. For sex related crimes, women are not only condemned to severe punishments such as death, but their sentences are brutally carried out such as stoning.

Violence against Iranian women is based on a reactionary culture that has institutionalized itself in the form of law.

Women are poorer that men in Iran and the situation is only getting worse with time. In addition to economic factors, other elements such as job restrictions and lower wages compared to men has exasperated the situation. Women are barred from positions of political power or from becoming a judge.

Women who end up with divorce are forced to leave their home and may well end up in streets despite all the years of their toil to serve their husband and children. Due to discrimination, most women do not lawfully own real estate therefore if they end up having to rent their residence, steep rent prices devour a great portion of their income leaving them with scarce money to manage their livelihood.

Ultimately, these forces take their toll on women and many end up as beggars or search in the trashes to survive.

Organized aggression of IRGC; another aspect of violence against Iranian women

Human traffickers, mostly members of the revolutionary guards (IRGC) or elements affiliated to it, kidnap young homeless girls or those peddling in streets and transfer them to neighboring countries, especially the rich Arab gulf states and use them as sex slaves.

There is also organized violence against women in prisons. Prison officials use rape as a tool to extract confessions or to breakdown women activists who have raised their voices against repression.

In the 2009 popular uprising, the intelligence ministry and security organs extensively used this tool to break the arrested women during anti-government demonstrations. Women are defenseless against this barbaric and inhumane aggression.

Nevertheless, in these 40 wretched years, violence against women has failed to force them to succumb to the theocratic dictatorship. Women have joined men in the struggle against this religious tyranny and have in fact placed themselves at the forefront and the political leadership of the main opposition movement against the mullahs. Women in Iran are fighting for their rights and pay the price of freedom to turn the page in their country’s history.