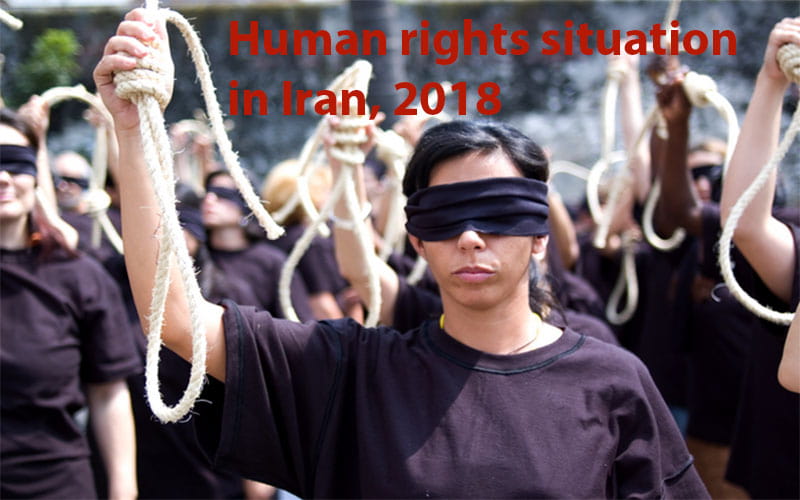 Amnesty International says that the human rights situation in Iran, 2018 has severely deteriorated;”Torture and execution continued, the authorities intensified their crackdown on the rights to freedom of expression, association and peaceful assembly, Labor rights were violated and dissenters were imprisoned.”

Amnesty International report on human rights situation in Iran, 2018, considers various aspects of human rights, such as, freedom of expression, association and peaceful assembly, the use of excessive force, arbitrary arrests, media crackdown, torture and other cruel treatment, as well as freedom of religion and belief, discrimination against women, and ethnic minorities, workers’ rights and death penalty, particularly in regard with the children who were under the age of 18 at the time of committing the alleged crimes.

Pointing to the nationwide protests, in January 2018, the Amnesty International report on the human rights situation in Iran, 2018, adds:

“Tens of thousands of men and women took to the streets throughout the year to protest against poverty, corruption, repression and authoritarianism.

According to the Amnesty International, “the trials were systematically unfair. Torture and other ill-treatment were widespread and committed with impunity.”

Floggings, amputations and other cruel, inhuman and degrading punishments were carried out.

Freedom of religion and belief was systematically breached, both in law and in practice.

“Executions took place, sometimes in public, and thousands remained on death row. They included people who were under the age of 18 at the time of the crime”.

Amnesty International’s report on the human rights situation in Iran, 2018 pointed to the arrest of dozens of conservationists in Iran and said that four of them were charged with “corruption on earth”, which carries the death penalty.

Throughout the year 2018, “human rights defenders and lawyers continued to face arbitrary arrest, detention and prosecution in reprisal for their work”.

Amnesty International has mentioned the arrest of “prominent human rights lawyer Nasrin Sotoudeh and her husband, Reza Khandan, how were arrested and faced charges in connection with their support of women protesting against forced hijab (veiling)”.

Another part of Amnesty International’s report relates to the workers’ rights. In this section, it is stipulated that the ban on the formation of independent trade unions has been continued: “thousands of workers staged peaceful demonstrations and strikes in protest unpaid wages, poor working conditions and other grievances. Authorities arrested hundreds, sentencing many to prison terms and flogging”.

The report points to the crackdown on workers’ protests in Haft Tapeh Sugarcane factory, and Ahvaz steelworkers, as well as teacher’s sit-in.

On February 21, 2019, the Amnesty International, noted in a detailed report titled” LAWS DESIGNED TO SILENCE”: “The Iranian authorities use provisions in the Islamic Penal Code to criminalize the activities of human rights defenders and civil society organizations.”

It is to be mentioned, that the human rights situation in Iran in 2018 has become much worse, and there are certainly many violations of human rights, especially women’s rights, which are not mentioned in this report.