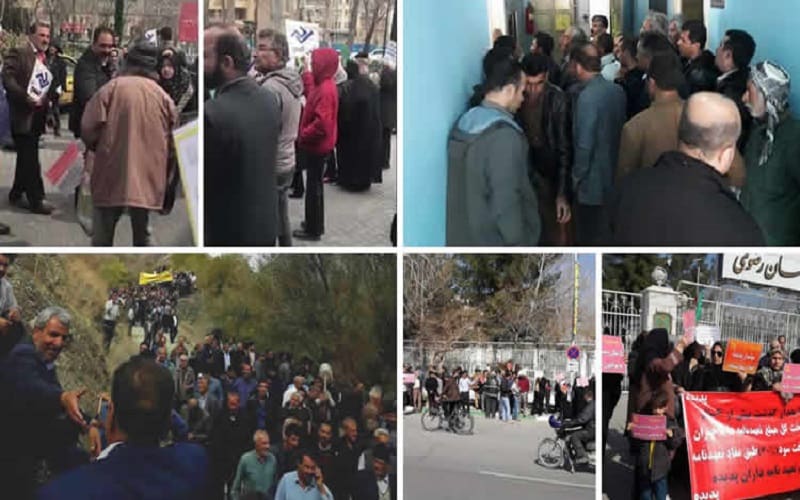 About 300 protests in a week, a manifest of national discontent of the Iran regime

Iran protests, March 1-8, 2019 reached almost 300. This statistic on one hand, represents an absolute popular discontent, and on the other hand, demonstrates the regime’s inability to solve the problems of the people.

The people articulate in their protests that the government is oppressive, incompetent and incapable of solving any problems.

They say in their slogans:”Neither the ruler nor the government, care about the nation”

The retirees reject the government’s demagogic policies, by chanting the slogan: “Neither Syria nor Gaza, but the retirees’ salaries.”

Also, the slogan: “O, Hojjat Ibn al-Hassan (the Savior), uproot the oppression”, represents a fundamental desire for toppling the regime in its entirety.

It is noteworthy that the Iran protests, March 1-8, 2019 is in congruence with the great rallies of the supporters of the NCRI in Europe and the U.S., as well as the activities of the resistance units, the PMOI/MEK’s network, inside Iran.

The total number of protest in the first week of March was 299:

On average, there were 43 protests a day.

The most important Iran protests, March 1-8, were as follow:

The most important protests of the retirees in Iran protests, March 1-8, were as follow:

In Iran protests, March 1-8, we witnessed the third round of nationwide strikes and sit-ins by the retirees and working educators that continued for three days.

-The educators in cities of Mashhad, Kermanshah, Ardebil, Shiraz, and Orumiyeh held gatherings in front of the province’s General Office of Education in protest against the officials’ failure to meet their demands.

The students of Agriculture department of Karaj Univeristy staged a protest gathering at the campus, when the head of the department prevented them from holding a protest meeting.

When the Rural Cooperative, a body affiliated with the regime, wanted to interfere in the election of Farmer’s Guild Association in Shadegan City (S.W.), the farmers gathered in protest in front of the province’s governorate in Ahvaz.

– On the eve of Rouhani’s visit to Gilan Province, people tore down his posters in several cities, including Lahijan.

–  When Rouhani’s vehicle was crossing a street in Lahijan to take him to a meeting, a protestor jumped in front of the car to stop it. Rouhani’s bodyguards pushed him aside. At the same time, other protesters chanted: “Death to Rouhani”.

– The employees of the Saham-e-Edalat offices, who had come from different provinces to Tehran, staged gatherings for three Consecutive days in protest to the lack of job security and overdue salaries.

– The employees of Khomeini Hospital in Karaj City staged gatherings for several days in protest to overdue salaries.

As the economy collapses, the mullahs are unable to solve people’s problems and thus more sectors of the society, particularly laborers and educators will face poverty. Given the growing number of the protests in the first week of March, it can be concluded that the clerical regime will have a difficult year ahead and has to face a nation that rejects it in its entirety.

This report originally published in Our Iran website in Persian