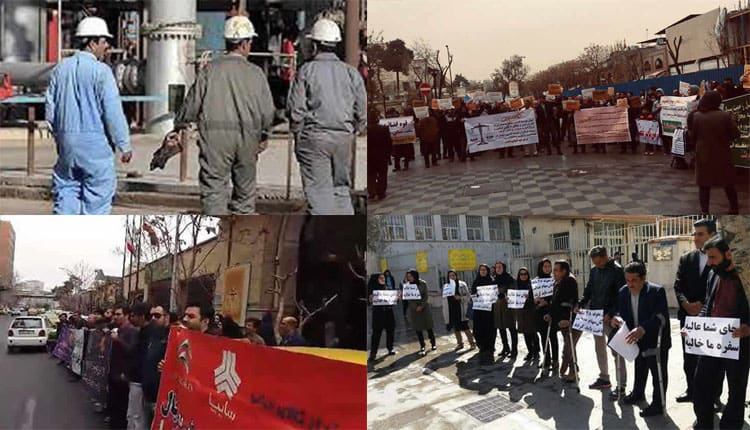 Despite approaching the New Year in Iran, the regime was unable to solve the problems of different strata, and the protests have increased during the second week of March. A great number of workers and the government employees have not received their wages, salaries, and bonuses, and there is no official who takes responsibility.

The regime is trying in vain to quell the social crises by hollow promises and did face a surge in protests on the eve of the New Year in Iran; on average, 9 protests a day have been recorded.

Statistical report of protests in the second week of March and on the eve of the New Year in Iran:

The total number of protests in the second week of March was 60:

On average, there were 9 protests a day

The thematic report of protests on the eve of the New Year in Iran:

The most important protests of the second week of March were as follow:

Plundered customers of financial institutes affiliated with the mullahs’ regime:

The students of the University of Khajeh Nasir in Tehran, staged gatherings for two days to protest against the the university.

The students of the University of Khajeh Nasir in Tehran, staged protest gathering for two days. They were protesting the fact that the university’s services are to be offered only if you pay for them.

A group of farmers in Bandar Abbass (S.) staged protest gathering against the ban on exporting Tomatoes.

On the occasion of Nowruz(the New Year in Iran), it is expected that all the people be paid so that they can afford their family’s needs for the eve of New Year. But because of a corrupt and inept system, the Mullahs’ regime cannot solve any economic problem and the majority of the Iranian families must spend their holidays in poverty, something which induces more protests.

This report originally published in the Our Iran website in Persian

FATF: A sword of Damocles over the regime’s head