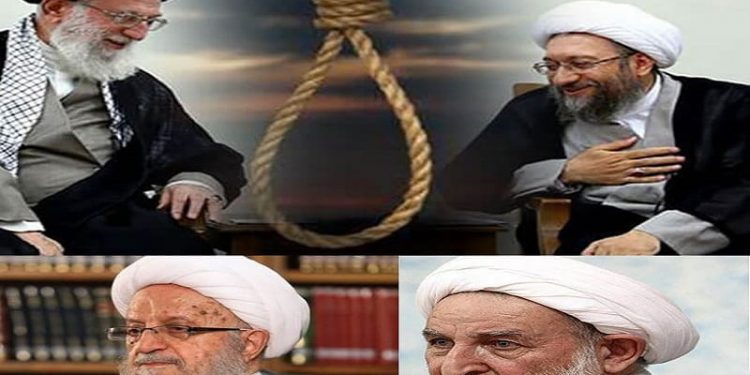 In the past week, two top officials of the mullahs’ regime confronted each other, further driving their regime into fear.

Sadeq Amoli Larijani who is one of the criminals of this regime, responded to Yazdi’s remarks in a message and exposed some parts of his dossier.

It is worth mentioning that Larijani has committed many crimes against the Iranian people, and because of his position in the regime, has embezzled much of the people’s wealth.

He has 63 bank accounts which collectively contain $300 million, sums directly obtained from public funds that supposedly belong to the people

The Confrontation between these two mullahs, and exposing each other’s corruption while their regime is on an economic and political crisis, is a sign of the fragile situation of the regime.

In this regard, officials warn each other that such cases should not be discussed publicly because the will result in more protests.

Ayatollah Makaram Shirazi, who is known as the “sultan of sugar” for his illicit trading of sugar, which has generated over $100 million for him wrote, “Past experience shows that this kind of tension has no result except making sedition and schism within the people.”

Hossain Shariatmadari, the chief editor of state-run Keyhan daily affiliated with Khameni’s faction, wrote, “Publishing such news have no result except displeasing the people and making the enemy happy.”

Ali Rabiei, the spokesperson the regime’s government, said, “Any discussion and dispute that will disrupt our companionship and cooperation in solving the current problems of the society is not suitable.”

Ayatollah Noori Hamadani described these events as causing irritation for the friends of the regime and happiness for enemy.

Over the past 40 years, the theocratic regime has committed crimes against people including the massacre of 30,000 political prisoners, members and supporter of People’s Mojahedin organization of Iran (Mojahedin-e- khalq, MEK/PMOI) in 1988.

The mullahs are still defending the massacre of MEK/PMOI members, because they consider the MEK as their arch foe and are grappled by fear for gravitation of young people toward MEK and their support for the MEK and Mrs.Maryam Rajavi.

In fact, to the theocratic regime, sacrificing the prosperity, security, freedom and wealth of the Iranian people for terrorism and warmongering are acceptable casualties in the march to preserve the rule of the mullahs. The officials of the clerical regime are lining their own pockets while people call out for freedom and democracy.

Result: The theocratic regime in Iran is accelerating toward its downfall, the Iranian people are fed up of 40 years of failure by mullahs, so they strive to support their organized resistance “the National Council of Resistance of Iran(NCRI)” which is led by Mrs. Maryam Rajavi, to strike the final blow to the mullahs, and establish a democracy based on separation of religion and state.