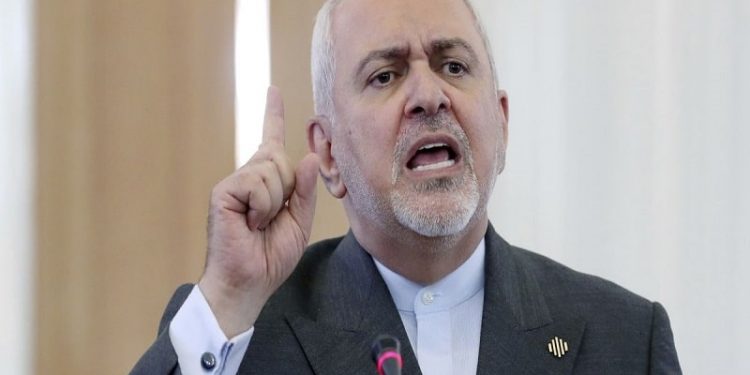 In August 21, Javad Zarif, the Iranian regime’s Foreign Minister, who was furious at various protests by the Iranian people in France, Norway, Finland and Sweden, threatened protesters to death in an interview with Press TV and said, “Those who are standing outside, ask them to participate in one of our meetings and see if they survive even for one minute. They can’t even be in Iraq because they will be eaten alive”

This is how Zarif showed the vicious nature of the regime he serves.

When the foreign minister issues death threats to dissidents abroad, one could only imagine what happens to the Iranian dissidents inside prisons and torture chambers.

He is truly the greatest apologist for the Iranian regime’s supreme leader, Ali Khamenei, as the U.S. State Department called him chief apologist in a tweet.

Iran’s foreign minister’s actions is not diplomacy but the justification of executions and torture, and according to the state TV, Zarif and Qasem Soleimani, head of the Iranian Revolutionary Guards Corps’ Terrorist Quds forces, a well-known terrorist, are two sides of the same coin.

As the National Council of Resistance of Iran.  said in its press release about Zarif on August 21: “Zarif’s remarks show once again that receiving the mullahs’ Foreign Minister emboldens the regime to engage in terrorism, murder and warmongering, and clearly runs counter to the interests of the Iranian people, who are seeking the ruling theocracy’s overthrow and the establishment of democracy and popular sovereignty in Iran.”

Zarif’s threats once again show that hosting the foreign minister of the mullahs’ regime encourages the regime to continue warmongering in the Middle East and is in direct conflict with the interests of the Iranian people who seek regime change and freedom.

The presence of Iran’s foreign minister in France is an affront to all the values that France represents. The French government must hold Zarif and his regime to account for their human rights violations and terrorist activities in the Middle East and across the globe. But even more importantly, Zarif must be held to account and answer why his diplomat Assadollah Assadi was involved in the failed bombing of the 2018 Paris rally of the Iranian Resistance.