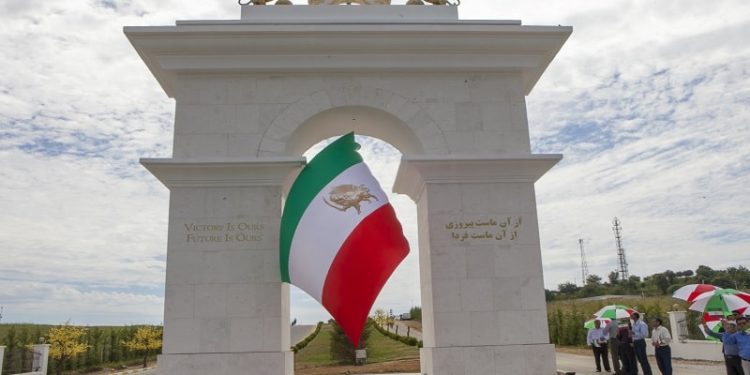 If you search the internet, you might find different opinions about the Iranian regime and the Iranian society. You might even find various political or so-called opposition groups criticizing the mullahs’ regime. Yet it is funny to see how the regime ignores them; it is simple: they are fabricated by its Ministry of Intelligence to create a democratic façade for its vicious regime.

Yet a simple analysis and research will show that the regime has only one enemy that it seeks to eliminate in one way or another: the People’s Mojahedin Organization of Iran (PMOI/MEK).

MEK is a red line for the regime, although the regime claims that this group has no support inside Iran, but it has never stopped persecuting, killing and torturing MEK members and supporters.

For 40 years, the Iranian regime has called Mojahedin-e-Khalq(MEK) its number one enemy and a threat to its theoretical rule. Therefore, the regime has published thousands of books, produced hundreds of films and television series, and held many conferences and expositions to spread lies and demonize the MEK, so the younger generation won’t join Mojahedin-e-Khalq(MEK).

The Iranian regime has sent hundreds of its agents abroad to continue this misinformation campaign against Mojahedin-e-Khalq(MEK), and even plot and conspire terrorist attacks against them.

This misinformation campaign has a single repeated slogan, in order to eliminate the MEK as a viable alternative option: “ Mojahedin-e-Khalq(MEK) has no support inside Iran.”

But a decent person who hasn’t sold his heart and soul to economic interests and oil can discover the truth with a simple examination and by asking simple question.

If Mojahedin-e-Khalq(MEK) have no support in Iran, how come that on June 20, 1988, peaceful protests of half a million people turned into a bloodshed?

If the MEK has no support in Iran, why are all their offices were shut down all around the country?

If the MEK has no support in Iran, why 30,000 political prisoners who were members and sympathizers of the MEK were executed?

Why Camp Liberty was hit by rocket attacks several times during five years of presence of the MEK.

Why did an Iranian diplomat based in Austria try to conduct a bomb attack on the annual meeting of MEK supporters in Paris on 30 June 2018?

Why were the ambassador and the first secretary of Iranian embassy in Tirana expelled from Albania for a terrorist plot against members of Mojahedin-e-Khalq(MEK) who are based in Ashraf 3.

Why do military and government officials, including the regime’s supreme leader, emphasize the role of the MEK in leading internal protests and worry about the tendency of Iranian youth to join them, and warn the people that the MEK have reached their homes through social media?

Answering these questions will make it obvious that the Iranian regime has never before worked so hard against any opposition group and tried to destroy it, so the outcome is that if the MEK does not have domestic and international support, there is no reason for the Iranian regime to be afraid of Mojahedin-e-Khalq(MEK).

A visible fact is the presence of hundreds of political figures and prominent personalities alongside the MEK, and their support for Mrs. Maryam Rajavi, president-elect of the National Council of Resistance of Iran (NCRI).

Although inside of Iran anyone who speaks even a word in support of Mojahedin-e-Khalq(MEK) will face detention, torture or even execution, the young generation does not hide its will to back MEK. They are now widely active among the people in the form of resistance units which include teams of few people who write slogans against the regime’s high ranking officials, lead the demonstrations and even burn banners of the Iranian regime’s leaders and burn Basij force bases (also a terrorist group).

About the role of resistance units and their support for the MEK, it’s better to mention the regime’s confessions.

On April 19, Intelligence Minister Mahmoud Alavi reported the arrests of 116 teams associated to the MEK in the past year.

Subsequently, the Director General of the intelligence ministry in East Azerbaijan Province on April 24, 2019, announced that there had been 110 arrests and encounters with the Mojahedin in the province in 2018.

On the other hand, the regime’s officials warn about the MEK’s popularity on cyberspace every day.

An IRGC brigadier general named Assadollah Nasseh said on state TV on July 28, “We must know that everything that takes place in the world against us is the result of their [PMOI/MEK’s] lobbying effort somewhere, or a price that they have paid… On the issue of missiles, we witness that it was based on the information that they provided to the Americans. Regarding human rights, they make up dossiers and files and provide them to Europeans and they put pressure on us in this way. They use every leverage against us.”

IRGC Brigadier General Gholamreza Jalali, who heads the regime’s civil defense forces, told state run ISNA on July 29, 2019, “our new war [with the PMOI/MEK] in cyberspace is more difficult than the Mersad operation.” [Mersad, or Operation Eternal Light, was a major offensive by the Iranian resistance that penetrated 100 miles inside of Iran leading to the liberation of two cities in July 1988 that shook the regime to its foundations.] “Many hateful, insulting and slanderous comments are posted by them [PMOI/MEK]. Their fingerprint is on many of the controversies that we face. Many of the news cycles in cyberspace that are orientated against the state and the revolution are their psychological warfare against us.”

On July 29, 2019, an MOIS operative named Mohammad Javad Hasheminejad complained of the PMOI/MEK adding, “we need to know our enemy and know its objectives so we can counter it accordingly.”

So based on confessions by regime officials and due to the measures they take against Mojahedin-e-Khalq(MEK) and youth activities in the form of resistance units, we can conclude that the MEK is a great organization with 55 years history, which has popularity inside and outside of Iran and is the only reliable alternative for future of Iran.

This is an organization that can establish a democratic government alongside NCRI and guarantees peace and security in the region and the world, which have suffered from the Iranian regime’s terrorist activities and its acts of sabotage.

So everything that the regime does against the MEK shows the magnitude and the gravity of this organization. There is a proverb in Persian that says: you cannot hide the truth behind the clouds, therefore the Iranian regime cannot hide the truth forever. Despite all the propaganda and demonizing against Mojahedin-e-Khalq(MEK), it is a matter of time before the truth becomes evident.