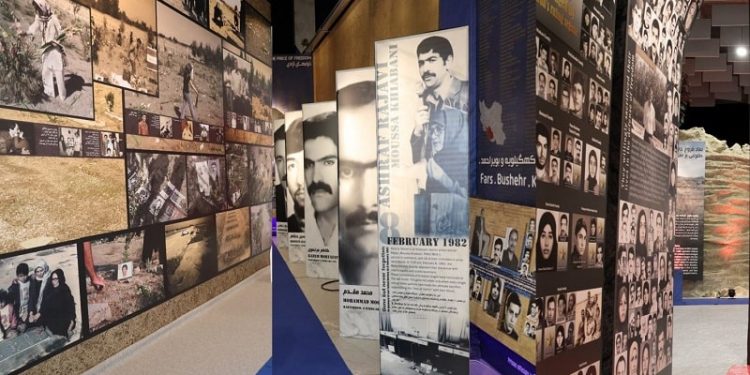 Victims of enforced disappearances in Iran reveal the Iranian regime’s human right’s record and its barbarism to the world.

In the summer of 1988, Ruhollah Khomeini, then-supreme leader of the Iranian regime, issued a Fatwa to massacre thousands of political prisoners, most of them MEK members and supporters. The victims of the massacre were buried secretly in mass graves in unknown locations.

In addition to the PMOI, members of other Iranian dissident groups were also executed during the 1988 massacre.

It’s worth reminding that most of these prisoners were trialed and sentenced. Some of them had even finished their sentence, but were kept in jail and were sent to the gallows of the firing squad during the 1988 massacre.

For decades, governments around the world turned a blind eye on the killing of political prisoners and their secret burial, but human rights NGO’s including Amnesty international demand to put pressure on the Iranian regime to uncover the location of mass graves.

After 30 years, the families of the victims are still looking to identify the mass graves and learn the fate and whereabouts of their loved ones.

On August 28, on the verge of Forcibly disappeared international day , Amnesty International urged UN member states to put pressure on the Iranian regime to uncover the location of mass graves.

In its statement, Amnesty said, “UN member states must use every opportunity, including the upcoming review of Iran’s human rights record at the UN Human Rights Council in November, to press the Iranian government to identify mass graves and reveal the fate and whereabouts of all victims of these tragic events.”

“It is misguided to view the 1988 mass killings as historical events. The enforced disappearances are ongoing and, 30 years later, victims’ families continue to be tormented by anguish and uncertainty over the fate of their loved ones,” Amnesty added.

Hear from the family of enforced disappearances in Iran

It’s worth reminding that the Iranian resistance has declared the number of the victims of this massacre to be above 30,000, and has published many names and photos in a book.

Iranian officials keep defending this crime. One notable case is Mostafa Pour-Mohammadi, who was a member of the regime death committee and sentenced thousands of MEK members and other prisoners to death. In an interview with with Mosalas magazine he defended this crime. The host of the program asked:

A major accusation against the Islamic Republic, which is usually picked up by foreign news organizations, relates to the issue of the ‘Hypocrites’ (the regime’s derogatory phrase used to describe the People’s Mojahedin, PMOI or (MEK) and the manner in which the Islamic Republic dealt with the MEK, the height of which was in 1988. You were in the Foreign Intelligence Department and had a role in this affair. You can explain how you were involved. This stigma has seldom been addressed, to explain what the issue was about, what happened. If you think it is appropriate, please speak about this.

Look, your enemy is lying. It is making accusations. It is resorting to any evil act. It has no barrier. It is coordinating in detail with your enemies and does not hesitate to carry out any action against you. Imagine we are in the middle of this. Do you expect us to simply announce all our operational plans and those issues that they can use to their advantage and clobber us with every day? So that they sideline and cover up 100 of our logical and correct statements in the media, and expose two of our points which we accept are our weaknesses so that they can present an important point of history using just two or three issues and events, and cast this image in the public mindset? This is certainly not a right thing to do. They are blowing their propaganda horns and concentrating on this story.

When the criminal, traitor enemy (MEK) is carrying out operations as a brigade of the enemy (Iraq), are we really expected to talk about legal debates and civil and humanitarian protections when we are in the middle of a war, and say, ‘this happened here’, ‘that happened there’? When I am in a bunker shooting at the enemy and suddenly someone who is not a soldier comes into my line of fire and is visiting the war scene, it is my duty to shoot him down. When I am bombarding the enemy and a bomb falls in a nearby village while the enemy is next to it, would you ask me why I hit the village?

They destroy your image all around the world. There has not be a single case of such destruction in the past 40 years, other than those in which the MEK have had the leading role. We have not yet settled the score with the MEK. We will discuss these matters after we eliminate them. We are not joking. They need to come and answer for their crimes and treachery.

Other Iranian regime officials repeatedly defended “Ebrahim Raisi,” who is currently the head of Iran’s judiciary and was a member of death committee. They claim that he should be rewarded for his involvement in this crime against humanity.

In August 2016, in defense of killing MEK members and supporters, Ahmad Khatami, a member of Assembly of Experts and a very close confidant of Ali Khamenei, the regime’s current supreme leader, said during his Friday prayer sermon: “What the late Imam [Khomeini] did in 1988 was a great service for our Islamic nation. We owe our security to that revolutionary act Imam did then. Those who purged the MEK should be granted medals.”

Ruhollah Hosseinian, a former judicial authority, said, “The enforcers of the massacre of MEK should be rewarded, and we will do the same if it is necessary.”

Mousavi Tabrizi who was general attorney in early 80’s, confessed in an interview with Fars news agency on August 28 that many of those who were executed had been trialed and sentenced before.

In 2016, Mrs. Maryam Rajavi started a justice movement for PMOI’s members who massacred in 1988. No doubt, one day the perpetrators will be brought to justice.

The UN and human rights communities have responsibility in this regard to hold the perpetrators accountable to see the world will be freed from those who try to maintain their power with the blood of innocent people and want to threat the world’s security.

Iran is a prison for female reporters