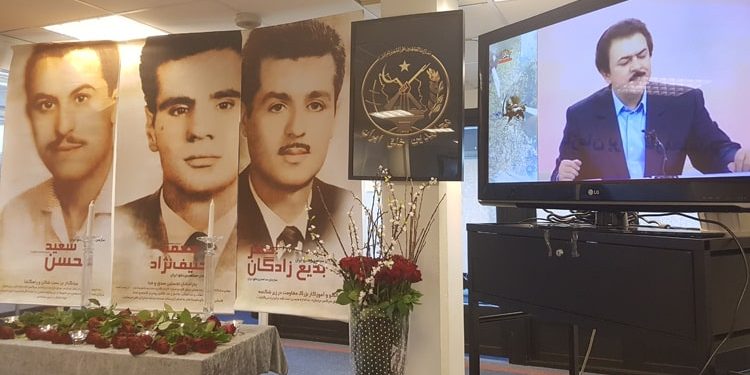 Iranians in various countries commemorate the anniversary of MEK's founding

Iranians, supporters of the People’s Mojahedin Organization of Iran (PMOI, MEK) and National Council of Resistance of Iran (NCRI) celebrated the 54th anniversary of the MEK/PMOI’s founding on September 6, 1965.

MEK supporters in Canada celebrated the 54th anniversary of MEK/PMOI’s founding. In a ceremony in Toronto, they put flowers in front of the pictures of MEK founders, executed by the Shah regime on May 25, 1972.

MEK supporters in Ottawa held a similar ceremony and commemorated the founders of the Iranian opposition movement. They also celebrated the event by listening to the speeches of Mr. Rajavi.

In Norway, MEK supporters also held a ceremony in Oslo, where they celebrated the anniversary of the main Iranian opposition group by installing large posters of MEK’s founders and playing speeches of Mr. Massoud Rajavi, the leader of the Iranian Resistance.

The PMOI/MEK was founded in 1965 by three intellectual students, Mohammad Hanif-Nejad, Said Mohsen and Ali-Asghar Badizadegan as an organization aiming to overthrow the Shah regime and establish a democratic state. In 1971, the Savak, Shah’s secret police, arrested the founders of MEK and members of the organization’s central council. A year later, the Shah regime executed the founders along with two other senior MEK members.

After the death of the founders, Mr. Massoud Rajavi, who was a member of MEK’s Central Council, was elected to the leadership of MEK, which became very popular after the 1979 revolution which toppled the Shah regime.

After the 1979 revolution, Mr. Rajavi remained vocal supporters of democracy, freedom and equal rights for all the people of Iran. The MEK stood firm against the inhuman policies and practices of the regime of Ruhollah Khomeini, who assumed power after the Shah’s downfall. In retaliation, Khomeini ordered the brutal repression of the MEK. In 1988, Khomeini issued a fatwa (religious order) for the massacre of MEK. As a result, his regime executed 30,000 Iranian political prisoners, mostly MEK members and supporters, in the span of a few months.

In the past 40 years, the MEK has been the main opposition group and the sole alternative to the tyrannical rule of the mullahs. Most members of the MEK currently reside in Ashraf 3, Albania.