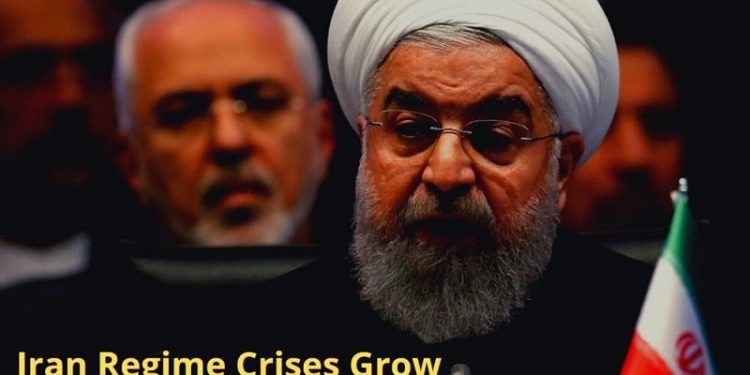 These days, we witness a several developments against the Iranian regime inside the country and abroad. In this regard, the regime’s Foreign Minister Mohammad Javad Zarif made a trip to Nordic states to beg these countries to buy his regime’s crude oil. But he was met by the anger of the Iranian diaspora (supporters of the Iranian Resistance, the National Council of Resistance of Iran-NCRI) in Finland, Sweden, and Norway. Photos and videos showing Zarif and his retinue with eggs on their clothes caused an international scandal for the regime in its entirety. More shaming for the regime was remarks by the Swedish Foreign Minister, who officially announced “We did not invite Zarif.”

Even more ridiculously, in tandem with at the G7 summit in Biarritz, Zarif was directly brought to a motel to meet with some people there, but he came back to Iran without any significant achievement, an abashed slap for the regime’s top diplomat.

It is worth reminding that the recent events such as sanctioning the regime’s super oil tanker, Adrian Darya 1 [previously known as Grace 1 with Panamanian flag], and also one of the regime’s front bank for laundering, Jamal Trust Bank, by the U.S. Treasury Department, show that the regime has to bear more pressures and pay a costly price for its adventurism and warmongering in the region and across the world. Following sanctions, the regime was taken aback by Federica Mogherini remarks on the Instrument for Trade and Exchanges (INSTEX), who said the financial instrument needs more time, which means there are no optimistic prospects for the Iranian regime and the mullahs cannot bank on it.

In this regard, we should not forget that the UN nuclear watchdog, the International Atomic Energy Agency, on Friday, August 30, gave an update on Iran’s two previous steps away from the deal [Joint Comprehensive Plan of Action]. It announced that just over 10% of Iran’s uranium stockpile was now enriched up to 4.5%, above the 3.67% limit stipulated in the 2015 deal.

It also said Iran’s total stockpile of uranium, which under the accord should be no more than the equivalent of 300kg of uranium hexafluoride, now stood at roughly 360kg.

Therefore, the Iranian regime is expected to meet more international isolation and restrictions.

Regime authorities pursued to revive the spirit of their rank and file using hollow threats by Hossein Salami, the commander of IRGC, against West and transferring Qasem Soleymani, the commander of Force-Quds, to Lebanon. But these steps haven’t helped the regime out of its current deadlock, highlighted by the silence of Ali Khamenei, the regime’s Supreme Leader.

In this context, day after day, we witness the escalation of political crises and rivalry in the highest ranks of the regime. Many regime officials are mocking Hassan Rouhani, the Iranian regime’s president, about negotiations, which means that there is no solution for the regime to extinguish its current crises.

These events are also a reminder that the main worry for the regime is on behalf of the Iranian people who do not want to pay the price of the regime’s failures in different sectors with their own flesh and blood and livelihoods. In addition to the explosive state of the Iranian society, there is a viable alternative to this regime which is organizing and leading the protests and uprisings against the regime in its entirety. The regime’s officials are blaming each other for the growing popular support for the National Council of Resistance of Iran (NCRI) and the main opposition group to the regime, People’s Mojahedin Organization of Iran (PMOI/MEK).