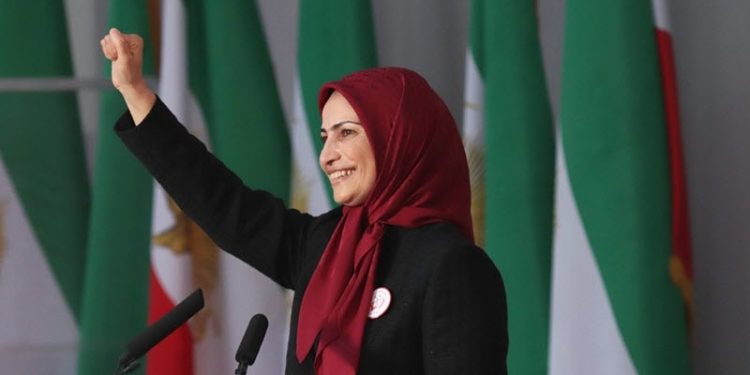 September 6 marked the 54th founding anniversary of Iranian opposition group People’s Mojahedin Organization of Iran (PMOI/MEK). On Wednesday, the members of the organization celebrated this occasion in Ashraf 3, Albania, where thousands of MEK members. During the event, Ms. Zahra Merrikhi, the Secretary General of the MEK, delivered a speech about the current state of the Iranian regime and the society, ongoing protests in the country, and recent achievements by the Iranian opposition and Iranian Resistance Units:

Zahra Merrikhi: I would like to congratulate the dear people of Iran on the founding anniversary of the People’s Mojahedin Organization of Iran. You are the true owners of this organization, and you have nurtured it for more than half a century.

In the past half century, throughout trials and tribulations, you supported your organization and movement. The 54th anniversary of this organization is the result of your toil and it’s your victory.

On behalf the members and supporters of MEK, I would like to salute our great founders Mohammad Hanif Nejad, Saeid Mohsen and Asghar Badizadegan. By sacrificing their lives, they made a breakthrough and started a new era in the history of Iran.

And we salute our leaders Massoud Rajavi and Maryam Rajavi who have set an example of sacrifice and honesty in the history of struggles for freedom.

The MEK is the principal force in the Iranian people’s front for freedom. This is an organization that is supported by all the ethnicities and religions of Iran, including Sunni, Shiite, Ahl-e Hagh, Christians, Zoroastrians and Jews, Fars, Azeri, Turkmens, Arabs, Kurds, Lors, Baluchis and Bakhtiaris, and representatives from all walks of life, from workers to intellectuals.

It was thanks to this support that, in the past 54 years, the MEK was able to overcome repression and execution, terrorism and conspiracies and the dirty deals of the mullahs in the region and across the world, and become the flagbearer of the fight against two dictatorships.

There’s no need to explain the dilemma in which the regime is trapped. The reasons for the mortal conditions that surround the regime are much deeper than international sanctions and the reduction of its financial resources, sad Sec. General Zahra Merrikhi.

Sec. General Zahra Merrikhi: The regime’s problem is that due to different factors, including the effects of the organized resistance and protest movement, the mullahs have lost their capacity to ensure their own survival. The appeasement policy of western governments, phony reformists, and the other allies of the regime have lost their breath.

The mullahs’ regime is in its overthrow crisis, and contrary to previous eras, it has no savior and is faltering at an accelerating speed.

From the turning point of the uprisings of December 2017 and the end of the deceitful “reformist-principalist” maneuvering of the regime, the explosive state of the society and the direction of political events prove that the regime has no way out of the overthrow crisis.

In such circumstances, the MEK has a bigger responsibility to shoulder, because, as a revolutionary Muslim organization, it rose up against tyranny and fundamentalism since Khomeini hijacked the people’s revolution, and it has been the main opposition of this regime in the past 40 years.

In such circumstances, the activities of the MEK and the Resistance Units and Councils, and the relentless political campaigns of this movement on the international front to foil the conspiracies of the mullahs and their supporters and to restore the rights of the Iranian people and their resistance, render the prospects of the overthrow of the mullahs clearer.

During this same period, Ashraf 3, which Mrs. Rajavi described as the “home of the freedom of the Iranian people,” was built with the leadership of Mrs. Rajavi and through the efforts of the MEK and the admirable help of supporters of the organization in Iran and across the world, and quickly manifested its political and strategic importance.

As you know, another important development during this period was the new generation of young Iranians who joined the MEK movement in different cities of Iran, especially the youth who took part in the 2017-2018 uprisings. Organizing these youth in Resistance Units was another aspect of the MEK’s activities inside Iran. Despite the regime’s widespread efforts to arrest and torture members of the Resistance Units, our organization was able to improve and expand the network inside Iran.

Through their activities, the Resistance Units were able to keep the flame of uprisings alit.

Also, organizing protests through the founding of Resistance Councils was another important aspect of MEK’s activities, especially in the past year. The regime’s security institutions and spokespersons have admitted to this fact.

Our goal is to overthrow the mullahs’ regime and to establish freedom and democracy in our beloved Iran.

I renew my pledge to people of Iran, with my leaders and all MEK members to redouble my efforts to establish freedom, democracy and equality in Iran. And I renew my pledge for the overthrow of the mullahs’ regime. This is the responsibility of the MEK, the Resistance Units and the great Liberation Army, and we are ready for it.

The hidden layers of violence against women in Iran