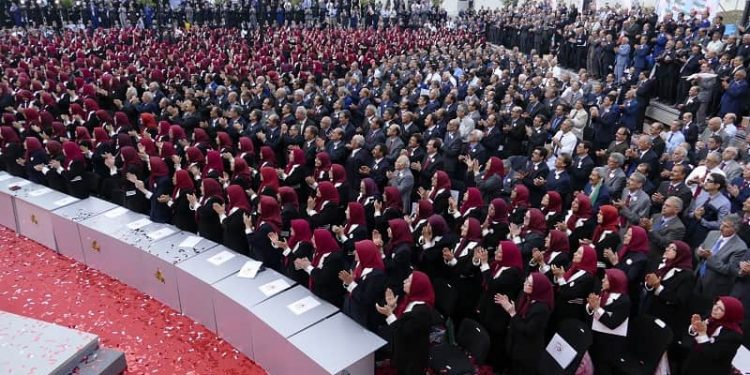 Since the Constitutional Revolution of 1906, a new era of social and political life begun for the Iranian people. For 120 years, the Iranian nation, with all its ethnic and religious diversity, has relentlessly pursued the cause of freedom and democracy at the cost of her very best children. While this struggle has had many ups and downs, it has constantly evolved the people’s awareness, knowledge and methods of fighting.

The Oil Nationalizing movement in 1950s, led by Dr. Mohammad Mosadeq, continued and deepened the Constitutional Revolution and the long-lasting struggle for freedom of the Iranian people, and despite the August 1, 1953 Coup-d’état, and the bloody massacre of the June 5, 1952, which was called the “burial of reformism,” this struggle entered a new era.

The leading political groups that were established in the 1960s aimed at overthrowing the Shah’s regime. Meanwhile, the People’s Mojahedin Organization of Iran (Mojahedin-e-Khalq, MEK) movement was a continuation of the Iranian National Movement led by Dr. Mosadeq.

The revolutionary founders of People’s Mojahedin Organization of Iran (Mojahedin-e-Khalq, MEK) had already begun their political activity in 1965 as the members of the youth branch of the National Liberation Movement.

The People’s Mojahedin Organization of Iran (Mojahedin-e-Khalq, MEK) was founded by Mohammad Hanifnejad, Saeed Mohsen and Ali Asghar Badi Zadegan as a revolutionary, national and democratic Muslim organization. The organization is a  historical continuation of the Iranian people’s 120 years of struggle for freedom.

The Mojahedin-e-Khalq (MEK) has passed important milestones over the past decades under the leadership of Massoud Rajavi. But after Khomeini’s hijacking the 1979 revolution, an important part of the MEK’s history and its struggle for freedom and democracy is the fight against the mullahs’ regime. In this forty-year battle, more than 120,000 MEK members and supporters have laid down their lives for the freedom for the Iranian people.

In October 1989, Mrs. Maryam Rajavi was elected as Secretary General of the MEK. In 1992 she was elected by the National Council of Resistance of Iran (NCRI) as President-Elect for the transition period after the overthrow of the mullahs’ regime.

During the 27 years that Ms. Maryam Rajavi has been President of the NCRI, eight other women have served as Secretaries General of the MEK.

With the transfer of the people MEK members outside Iraq in 2016, followed by the building of Ashraf 3 in Albania and holding a five-day annual gathering there, the organization entered a new era of its struggle to overthrow the mullahs’ regime.

On Friday, September 6, 2019, the Mojahedin-e-Khalq (MEK) entered the 55 year of its history. On Wednesday, the members of the organization celebrated this occasion in Ashraf 3, Albania, where thousands of MEK members currently reside.

“The MEK is the principal force in the Iranian people’s front for freedom. This is an organization that is supported by all the ethnicities and religions of Iran, including Sunni, Shiite, Ahl-e Hagh, Christians, Zoroastrians and Jews, Fars, Azeri, Turkmens, Arabs, Kurds, Lors, Baluchis and Bakhtiaris, and representatives from all walks of life, from workers to intellectuals.

“It was thanks to this support that, in the past 54 years, the MEK was able to overcome repression and execution, terrorism and conspiracies and the dirty deals of the mullahs in the region and across the world, and become the flagbearer of the fight against two dictatorships.”

“As you know, another important development during this period was the new generation of young Iranians who joined the MEK movement in different cities of Iran, especially the youth who took part in the 2017-2018 uprisings. Organizing these youth in Resistance Units was another aspect of the MEK’s activities inside Iran. Despite the regime’s widespread efforts to arrest and torture members of the Resistance Units, our organization was able to improve and expand the network inside Iran.”

The MEK Secretary General then emphasized, “As the Mojahedin-e-Khalq (MEK), we pledge to make the impossible possible only by relying on ourselves and our people. We are committed to building a society free from oppression and exploitation.”

“I renew my pledge to people of Iran, with my leaders and all MEK/PMOI members to redouble my efforts to establish freedom, democracy and equality in Iran. And I renew my pledge for the overthrow of the mullahs’ regime. This is the responsibility of the MEK, the Resistance Units and the great Liberation Army, and we are ready for it,” Ms. Merrikhi conclude.

In the same ceremony, NCRI president Mrs. Maryam Rajavi said: “The founding of the MEK/PMOI marks a rebellion in Iranian history, which incessantly shakes the foundations of the Shah’s palace and the Sheikh’s (the regime’s Supreme Leader Ali Khamenei) Beyt (office).”

On the role of women in the movement, Mrs. Rajavi said:

“Women have been and still are at the helm for over 30 years of its 54-year existence. The Secretary Generals leading the PMOI/MEK throughout these years are my dear sisters: Fahimeh Arvani, Shahrzad Sadr, Mahvash Sepehri, Beheshteh Shadrou, Mojgan Parsaii, Sedigheh Hosseini, Zohreh Akhyani and Zahra Merrikhi.
Qualified and competent women hailing from Azerbaijan, Tehran, Kurdistan, Gilan, Khuzestan, Semnan and Mazandaran. Every single one of them embodies liberating values in the ranks of the organization. They have been symbols of sincerity and integrity, energy and exuberance, strength and firmness, a fighting spirit and resilience, selflessness, modesty and humility, accountability, unity, honesty, and vanguards of steadfastness, patience and triumph.
“Indeed, aside from being the Secretary Generals of the PMOI/MEK, they are the sources of hope for the people of Iran.

“And now, they have been replicated in the ranks of the Central Council of the PMOI/MEK, which is made up of 1,000 women and is charged with the leadership of this organization.”

On the future goals and plans of the movement, the president-elect of the Iranian resistance added:

“The  MEK/PMOI has stored and nourished the Iranian people’s historical perseverance. And I assure you that this organization spearheads the Iranian society’s quest for liberation from tyranny, discrimination and injustice, and it will realize the true aspirations of the people of Iran for a glorious future.

“In contrast to the one-dimensional outlook of various opposing views and schools of thought over the past two centuries, the  MEK/PMOI set both freedom and equality as their goals. They have risen up for breaking the chains of repression, and also for eliminating discrimination and injustice.
“The PMOI‘s enormous sacrifices over the past 40 years in the struggle for freedom have made its name synonymous with the word “freedom.” At the same time, this is a movement determined to obliterate oppression and exploitation.”

Regarding the ideological outlook of the movement, Ms. Rajavi said:

“The organization which was founded by Mohammad Hanifnejad and led by Massoud Rajavi, has been a flag-bearer of, and paved the way for, a democratic Islam.
“Over the past half a century, the PMOI/MEK has acted as a formidable barrier against the onslaught of medieval, despotic and misogynistic thoughts exploiting the name of Islam.
“Since the beginning, Hanifnejad rejected those interpretations of Islam which promoted exploitation. He showed that Islam does not defend oppressive classes, but stands on the side of the deprived and the oppressed.

“It is possible to liberate society from gender discrimination and to create new arrangements based on gender equality and human solidarity.

“Freedom and justice are mutually necessary. It is possible to establish freedom, justice and equality, and the PMOI/MEK has risen to realize this goal.”

“Today, I want to give assurances to the people of Iran that the PMOI/MEK is capable of overthrowing the regime by relying on their own people. They are capable of replacing religious tyranny with freedom, democracy, and separation of religion and state. They can replace distrust with trust, insecurity and fear with security, and injustice with equality. They are capable of leading Iran towards freedom, prosperity and progress.”

The hidden layers of violence against women in Iran