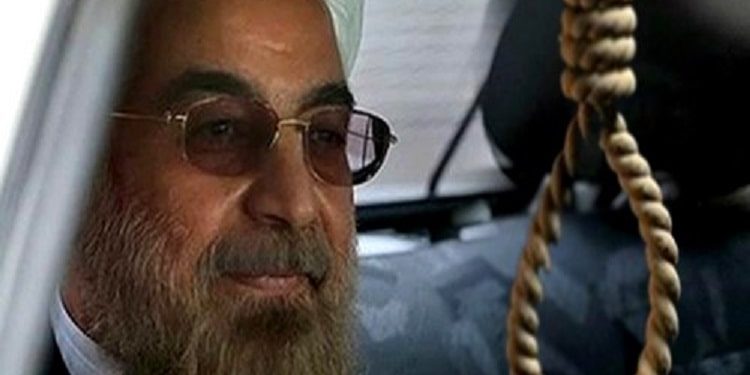 On Tuesday, the Iranian regime’s President Hassan Rouhani attends the UN General Assembly, in an effort to portray himself as a moderate in the West. Meanwhile, his history of horrific crimes paints a totally different picture.

In the past 40 years, Hassan Rouhani has been complicit in the crimes of the Iranian regime against the Iranian people, the countries of the region and world peace. He has been a key figure in the mullahs’ regime since the beginning of their rule in 1979, and he has been one of the main perpetrators of the regime’s crimes.

A brief look at his record shows clearly that he is a deceiver and a liar who should not be invited to the United Nations and must be tried in international courts for crimes against humanity.

Hassan Rouhani has been in highest positions in the government for many years, some of which are as follows:

He was a member of parliament at the beginning of the founding of the regime, then was appointed to security positions

From 1986 to 1988, he was chairman of the Executive Committee of the Supreme Defense Council

From 1985 to 1988, he was chief of staff at the Khatam al-Anbia garrison, one of the Revolutionary Guards’ covert institutions for financing terrorism.

From 1988 to 1989, he was promoted to the position of deputy commander-in-chief

It is worth mentioning that hundreds of thousands of people were killed and billions of dollars were squandered in the Iran-Iraq war when he served in those positions.

Some of statistics are as follows:

450,000  students were sent to clear minefields and used as disposable soldiers

$1 trillion of material damage, more than three times as much as Iran’s oil revenues during the 20th century.

After the Iran-Iraq war, Rouhani continued to hold senior security and government positions:

2000 to 2005: he was the National Security Advisor of regime president Mohammad Khatami

It is worth reminding that the Supreme Security Council of the Regime decides many terrorist acts in the world, some of which are as follows:

The assassination of Abdul Rahman Qasemlou—July 13, 1989

The assassination of Abdurrahman Boroumand—April 18, 1991

The assassination of Reza Mazlouman—May 27, 1996

As the secretary of the Supreme Security Council in 1999, he played a major role in suppressing the uprising of Tehran’s students and people.

“Any movement of these people, wherever they are, will be strongly and decisively suppressed,” he said.

From 1991 to 2017, he chaired the Expediency Council’s Political-Security and Defense Commission.

From 2013 has as served as president of the regime. During his tenure, his regime has executed more than 3,800 people.

Since July 1980, Hassan Rouhani has been calling for the execution of political dissidents in the Friday prayers in public.

He said: “Just as we punish adulteries in public so that everyone would witness their suffering, we should hang political dissidents at the Friday prayers to have more impact on society.”

Rouhani was the first official to force women to wear compulsory hijab at work, “I ordered all the women to wear a hijab at work… I issued an ultimatum that no woman is allowed to come to work without a hijab… The women protested and shouted. Someone said it’s impossible… I stood firm and obligated them to wear the hijab at work,” he proudly recalled in an interview.

Meanwhile, in 1988, during the massacre of political prisoners and MEK members, he occupied important government posts and was involved in this crime.

Rouhani’s refusal to come clean about the secret executions of thousands MEK members 30 years ago amounts to an ongoing crime against humanity.”

In an effort to stamp an overwhelmingly popular pro-democracy movement, in summer of 1988, the clerical regime’s founder, Ruhollah Khomeini, issued a fatwa ordering that all the political prisoners who did not repent should be summarily executed, without mercy.

Over the course of a single summer, some 30,000 political prisoners, the vast majority of them activists of the main Iranian opposition movement, the People’s Mojahedin Organization of Iran (PMOI/MEK) were sent to the gallows and were secretly buried in mass graves.

The massacre of Iranian political prisoners in mid-summer of 1988 is considered to be the greatest crime against humanity after the World War II. It is a crime that all the factions of the theocratic regime ruling Iran took part in, and a pond sea of blood that Khomeini baptized all his regime in it

In addition, the Iranian regime, under the supervision of Rouhani as the regime’s head of the security council, has conducted more than 130 terrorist operations abroad against the members of the MEK. This includes deadly rocket attacks against the MEK members in Iraq’s “Camp Liberty,” which resulted in many casualties and injuries.

Hassan Rouhani, while trying to portray himself as a peaceful and moderate figure, but the truth is that he is a liar and a charlatan who is causing insecurity in the region. Earlier this year, he praised the Revolutionary Guards for downing a U.S. drone.

He said, “we hit the drone with a system that is constructed in Iran, its missile is made by Iran, its radar is made by Iran, that is, we searched with our Iranian radar, we locked with Iranian radar, we targeted it with our Iranian missile … We kiss the hands of all those who created this domestic industry in the Ministry of Defense, the hands of all who used this tool well in the Revolutionary Guards.”

“Today, if we look at every corner in Afghanistan, Iraq, Syria, Lebanon, Palestine, everywhere, we see the footprint of bravery of Commander [Qassem] Soleimani,” Rouhani said on May 10, 2016, adding that “the Islamic Revolutionary Guard Corps (IRGC) is present to defend our holy shrines in Iraq and Syria, to defend the oppressed in Lebanon, in Palestine, in Afghanistan, and other places that request assistance from the Iranian people and the Iranian government.” (Quds Force Tasnim News Agency, May 10, 2016).

Hassan Rouhani also defended the production of weapons of mass destruction and said:

“We built, are building now, and will build missiles… We do not hesitate to build, manufacture, store, and use when necessary to defend ourselves, any weapons of any kind that we need,” Rouhani said on October 29, 2017 in the clerical regime’s Parliament. He added that the United States disturbed the security of Syria, the security of Lebanon, the security of Iraq and the stability and security of Afghanistan, and wanted to “break down Iraq”, and we “went to help the Iraqi people, to help the Syrian people, and we did not allow “the territorial integrity of Iraq to be undermined.”

Hassan Rouhani was the velvet glove of criminal regime’s Iron hand, that has executed 120,000 political prisoners, adopted terrorism as its standard foreign policy, has not stopped for a minute during all these years from fanning the flame of war in the region and tried to produce and acquire mass destructive weapons.   As Mike Pompeo said, the Iranian regime’s leaders are bloodthirsty and looking for war

Now, it is time for Europe to concede the proven realities, and stand alongside the Iranian people and the people of the region and the aroused consciences around the world against this regime that is the plague of contemporary humanity, and set aside the absurd mirage of moderate faction inside this regime.

In last four decades the appeasement policy has exerted enormous damage to the Iranian people, and to the peace and tranquility in the region. The effects of such long policy in the deeds of the appropriate entities must be recognized, corrected, and compensated.

As it has been numerously underscored by Mrs. Rajavi, the President elect of Iranian Resistance, the means to stop and compensate this policy is to recognize the National Council of Resistance as the democratic alternative to this regime. An entity which has been the major victim of this policy.