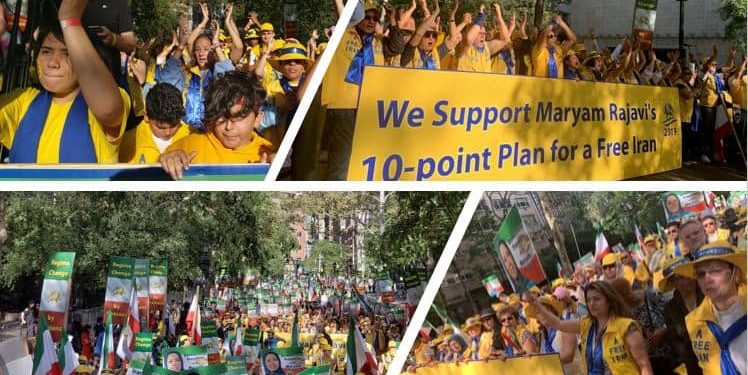 Supporters of the Iranian resistance and the People’s Mojahedin Organization of Iran (PMOI, Mujahedin-e Khalq or MEK) held a huge protest rally against the presence of Iranian regime president Hassan Rouhani at the United Nations General Assembly, underlining that Rouhani doesn’t represent the Iranian people.

Iranian resistance and MEK supporters, while chanting slogan against representative of the biggest state sponsor of terrorism, announced their support for the National council of resistance of Iran(NCRI) and the PMOI/MEK as the true representatives of the Iranian people.

Iranian resistance and MEK supporters echoed the voice of the people of Iran, who demand regime change via their continuous uprisings, protests, and strikes.The participants demanded the overthrow of the Iranian regime in its entirety.

“The NCRI 10-point plan is a guarantee for a prosperous, democratic and nuclear free Iran the NCRI has the broadest support in US and around the world,” said Senator Lieberman while addressing the Iranian resistance and MEK supporters rally in New York.

“NCRI can take over and run Iran like no other Regime Change models! From Regime of terror to regime of democracy and freedom under leadership of madam Maryam Rajavi it ends capital punishment and restore respect for women’s right,” said Mayor Rudy Giuliani addressing NCRI and MEK supporters rally in New York

In a video message addressing the rally of MEK and NCRI supporters, Mrs. Maryam Rajavi, President-elect of the NCRI, urged the UN Security Council to declare the clerical regime a threat to global peace and security. Mrs. Rajavi highlighted:

“The UN Security Council must declare the clerical regime a threat to global peace and security. And, the dossier of the regime’s human rights violations, particularly the massacre of 30,000 political prisoners in 1988, must be referred to an international tribunal.
“Ousting the clerical regime from the rest of the region and expelling the IRGC and proxy militias from Iraq, Syria, Yemen, Lebanon, and Afghanistan is an urgent imperative.
“We urge all countries to join the international front against the religious fascism. The international community must recognize the right of the Iranian people’s Resistance to overthrow the religious fascism and achieve freedom.”