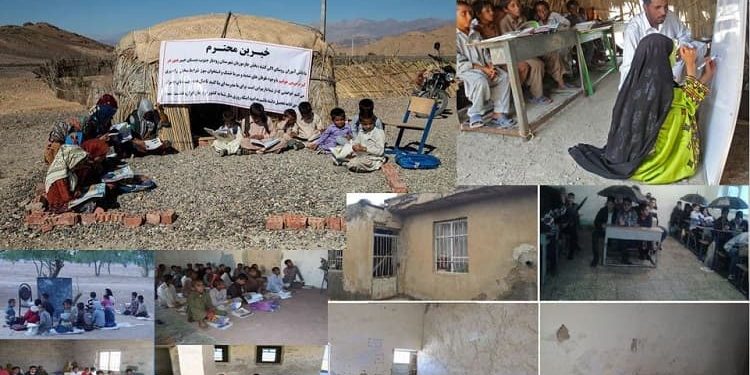 This Monday marked the new school year in Iran. 14.6 million Iranian schoolchildren have registered to go to school. But in the current state of Iran’s schools and education system, there is no positive prospect for these students. Iran’s schools are worn out, non-standard, cramped, and jam packed with schoolchildren. There aren’t enough teachers and education workers to fulfill the needs of the future generations of Iran. And the discrimination between services provided to large cities and rural areas makes the situation even worse.

Mohsen Haji Mirzaei, the Iranian regime’s education minister, stipulated last week that there’s a shortage of 100,000 teachers in Iran’s schools. Iranian teachers are often deprived of their most basic rights and are struggling to make ends meet and often work in double or triple shifts.

The schools themselves aren’t in a state that is suitable for educating young children. More than being a place for learning and teaching, Iran’s schools are a threat to the lives of students and teachers.

Last June, state-run IRNA News Agency reported that approximately 27 percent of Iran’s school buildings are ruined, 34 percent require renovation and only 39 percent of schools have reliable buildings. IRNA concluded that 1.5 million schoolchildren are studying in buildings that need to be renovated and 2 million children are in serious danger.

In September 2018, state-run “rouydad24” website wrote, “As the latest census shows, the 20 million of the country’s population are 7-19 years old.

If we put this figure together with the latest statistics of 14.6 million Iranian students, we will not get a good result:

7.4 million deprived of education! Which are added to many illiterate or less literate.”

One of the reasons that millions of students are forced to drop out of school or have no opportunity to experience school, class, and education is the expensive cost of stationery and the cost of education.

For example, the cost of a simple student backpack has reached to 175,000 tomans this year, which is 2.5 times more than the previous year’s price.

Regarding the high prices of stationery, a state-run website Darayan quoted a school principal as saying:

But it is the people who have to bear the extra cost, which is all due to the regime’s corrupt policies.

Yet the Iranian regime either plunders the national wealth or wastes it on its warmongering agendas in neighboring countries. This regime has not only pushed the Iranian society on the edge of destruction, but also tries to eliminate the future generation. The only solution, however, is to get rid of this regime.

“Within two months, thousands of paper pulp imported at a rate of 4,200 Toman per U.S. dollar left the country without entering the production cycle. Paper and media problems are one of the causes of corruption during this period. Everyone was involved in this corruption.”

It is worth mentioning that the U.S. dollar is exchanged in two rates in Iran. One is the official rate declared by the government (approx. 4,200 tomans per USD) and the other is the real rate of the currency exchange market (above 11,000 tomans per USD). Government officials and their affiliates often take advantage of this deficit to purchase make huge profits. For ordinary Iranians, dollars are only available at the high market rate.

One of the results of the poor state of education in Iran is the spread of child labor. According to estimates, there are about 7 million working children in Iran.

The reasons and causes for deprivation of Iran’s children from education are not wide ranging. A quick glance at the lives of most Iranian children who are deprived from the education shows the bitter realities of poverty in Iran. The economic poverty of families and financial deprivation creates a major barrier to educational attainment. As a result, many children are forced to go to the labor market instead of school.

According to Article 5 of the Iranian regime’s Labor Law, the employment of children under the age of 15 is prohibited and employers who violate it must be prosecuted.

It is absolutely clear that the high rate of children deprived of education shows the inefficiency of Iran’s education system and the violation of the Article 30 of the Constitution, which underlines the government’s role in providing free education until the end of high school. Any system that fails to abide by this law should be prosecuted under article 570 of Islamic penal code for violating a fundamental right included in the constitution.

The tale of children who are deprived from education is a long one. Every year, Iranian regime officials only talk of the necessity to change the educational system, changes that will reduce or end this deprivation, yet there is neither a breakthrough idea, nor a practical plan of action.

In a statement on the occasion of the new schoolyear, Mrs. Maryam Rajavi, president-elect of the National Council of Resistance of Iran (NCRI), hailed the teachers and students who have been standing up for their rights against the Iranian regime. “Iranian students, teachers and professors are rising up to build a free Iran for tomorrow, to establish a society based on freedom, democracy, equality, and separation of religion and state, and to set up a democratic educational regime,” Mrs. Rajavi said. “They seek to build an advanced educational system which is free and mandatory for all children of Iran, a credible higher education based on academic freedom, and a universal athletic regime where every Iranian girl and boy in every city and village would have the chance to freely and equally engage in various sports fields.”

Students are the hope for building Iran’s future. But will they be able to attend classrooms?

For a regime whose officials are either stealing the wealth of Iran or burning it in the bush of regional warfare, destroying not only the present Iranian society but also its future generations, the only solution is overthrow it and replace it with democratic state.