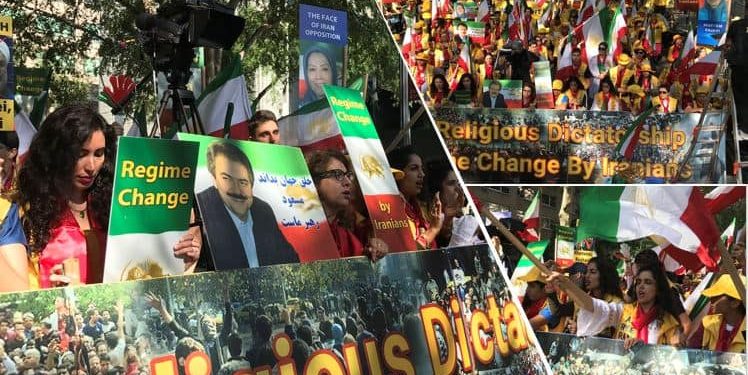 The demonstrators demanded the expulsion of Iranian regime President Hassan Rouhani and the mullahs’ delegation from the UN. The participants in this rally described Rouhani as the representative of a warmongering regime that has the world’s highest number of executions per capita. This regime considers its survival conditioned on a continual support of terrorism, human rights violations, attacking oil facilities, piracy and nuclear blackmail. The delegation of such a state should be expelled from the UN immediately.

The PMOI/MEK (Iranian opposition group )supporters rallying on Wednesday announced their comprehensive support and solidarity with popular protests and Resistance Units members to overthrow the mullahs regime and establish freedom and the rule of the people in Iran.

On Tuesday, Iranian Americans, joined by Iranians from Europe and Canada, gathered in New York for a major protest rally to voice their opposition to Rouhani’s participation in the UN. The demonstrators condemned the criminal terrorist mullahs in Iran, emphasizing this regime does not represent the Iranian people and Tehran’s seat in the UN belongs to the true representative of the Iranian people, being the opposition coalition NCRI led by Maryam Rajavi as President.

Secretary Pompeo accused the Iranian regime of flat out lying, adding the September 14 attack on the Aramco oil facilities was an attack on Saudi Arabia and the international economy. Iran’s regime has always launched attacks on neighboring countries, and continues to fund Hezbollah and Houthi militias, he added. The United States will continue to tirelessly apply the policy of sanctions on the mullahs’ regime and the more they lash out, the greater our pressure will be, Sec. Pompeo continued.

Washington is taking new action to disentangle the Revolutionary Guards (IRGC) from the Iranian economy and the U.S. imposed new sanctions on Chinese entities on Wednesday for knowingly transporting Iran’s oil.