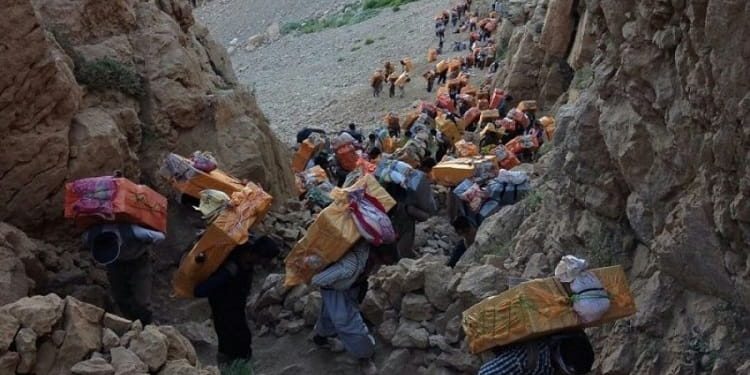 The tough economic situation caused by the mismanagement and corruption of the mullahs’ rule have put the Iranian people in dire straits.

While regime officials invest billions of dollars in luxury cars and luxury villas in good areas of Iran and their children’s studies abroad, the people of Iran’s Kurdish region, who are under extreme poverty and discrimination by the mullahs’ regime, have turned to porting.

Porting, a tragic story of fight for bread and life

Porters are mainly people from the border regions of Iran who have turned to one of the most difficult and dangerous ways of earning a living, namely cargo transportation on their back on mountainous roads, one of the most primitive means of transport.

Most of the porters are belonging to the western and northwestern provinces of Iran.

Porting is a way of earning money in the provinces of Kurdistan, West Azerbaijan, Kermanshah, Ilam.

But porting has also become a common job in the Sistan and Baluchestan, the southwestern reaches of Iran mostly inhabited by the Baluchi minority.

Porters in the border areas of the Kurdish provinces of Iran face many problems for their livelihoods.

Impassable mountain roads, danger of falling, frostbite, falling in avalanches and shooting by border guards and the Revolutionary Guards corps (IRGC) are among the dangers that the Kurdish porters, who live mostly in deprived areas, face on a daily basis.

When the Kurdish porters leave the house for work, they have no hope of returning. Their lives become a choice between dying of starvation or earning a loaf of bread in the harshest possible way.

In Kurdistan, it is not only men porting, but also youth such as young girls are porting. Every day, their lives are endangered not only by the regime’s trigger-happy border guards, but also by minefields, road accidents falling down of mountain or falling in the snow in the winter.

According to various reports, during the first six months of this year, from March 21, 2019 to September 22, at least 121 Kurdish porters were killed or wounded in various areas of Kurdistan.

From these victims, 84 percent of them were killed by the direct fire of the Revolutionary Guards (IRGC) border guards.

Statistics confirm that Iranian border guards killed 27 Kurdish porters and wounded 77 others by direct fire during this period.

Three of the Kurdish porters who were killed by direct fire by Iranian forces were under 18 years of age.

Dozens of porters have been killed in recent years due to economic problems.

The highest number of Kurdish porters who were killed or injured is from the West of Azerbaijan, with 23 dead and 60 injured.

However, some regime officials have previously acknowledged that the volume of smuggled goods imported by porters is relatively small compared to other sources. In fact, the Revolutionary Guards run the largest smuggling campaign in Iran, and the amount of money and goods they cross over the borders of Iran dwarfs the meager amounts that porters carry on their bent backs to make ends meet.

The reality is that the suffering of the Iranian people will not end unless the Iranian regime is overthrown.

As long as the regime rules Iran, the wealth of the Iranian people will be spent on terrorism and war in the region like Syria, Yemen and Lebanon.

So, the solution to the problems of Iranian people and Iranian ethnic minorities that have been discriminated against by this regime is only possible with the overthrow of the mullahs.