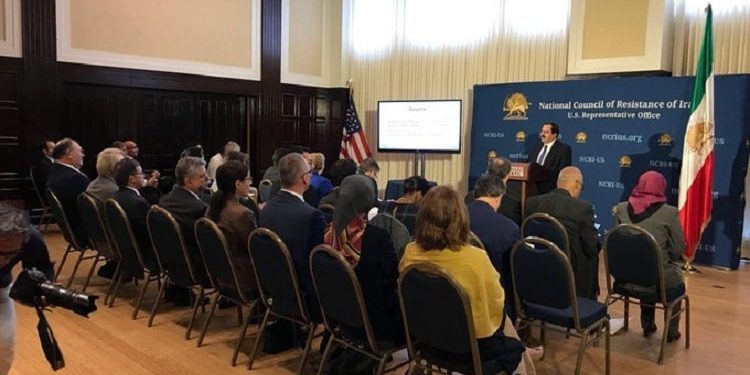 In a press conference held at the National Press Club of Washington, DC, on Monday, the National Council of Resistance of Iran (NCRI) revealed new information on a recent attack by the Iranian regime against the facilities of Saudi oil giant Aramco.

Ms. Soona Samsami, the U.S. representative for the NCRI, opened the event by sharing insights on the reasons behind the Iranian regime’s attack against its southern neighbor. She also emphasized the regime’s impasse in dealing with its problems, which has led it to lash out against members of the international community.

“Based on intelligence obtained by the Iranian opposition People’s Mojahedin Organization of Iran (PMOI/MEK) from inside the Iranian regime, the decision for this attack was taken in the Supreme National Security Council (SNSC), presided over by regime President Hassan Rouhani. Foreign Minister Mohammad Javad Zarif is also a regular member of the SNSC and attends its sessions. A number of Revolutionary Guards (IRGC) commanders attended this meeting,” Ms. Samsami said in her opening remarks.

“The operation’s tactical headquarters led by IRGC brigadier general Mohammad Fallah deployed to the Omidiyeh base in southern Khuzestan province, southwest of Iran, a week before the attack. Missile experts were also transferred to this base prior to the attack.

“The theocracy in Iran has entered the final phase of its demise. The regime tries to prop itself up and prevent an uprising through suppression and sponsorship of terrorism against its opposition. The regime attempts to contain the anger of the society, blackmail the international community into inaction and retreat through warmongering.

“If the regime ceases these activities, it will implode. The regime has paid no price for these actions and silently occupied Iraq.

“Our intelligence shows that the regime’s calculus is that it won’t pay any heavy price until the 2020 U.S. presidential elections. This is the reasoning behind its attack against the U.S. drone, piracy and the attack against Saudi Arabia.

“Mrs. Maraym Rajavi said, ‘The attack on a neighboring country’s oil installations is a major step and a new phase in the warmongering policies of the religious fascism in Iran which demands firm action. The ultimate solution is to change this illegitimate regime by the Iranian people and their resistance, the PMOI/MEK.’”

Alireza Jafarzadeh, Deputy Director of the NCRI US Office, gave more in-depth details on how the attack was planned, who was involved in the planning and decision-making, as well as the types of weapons used in the operation.

“The decision was made by Ali Khamenei. Top IRGC commanders were involved in the planning. The information we’re revealing today comes from the network of MEK inside Iran. They have obtained this information from their sources from inside the regime and the IRGC,” Jafarzadeh said.

“When Khamenei decided to make this attack, the SNSC convened to discuss this issue. The final decision was made in an SNSC session on July 29.

“SNSC meeting are presided over the Hassan Rouhani. Zarif regularly attends these meetings. Also present in these meetings were IRGC commanders. Major General Gholamali Rashid—you want to remember his name—his role could be more important than others. He is the commander of the Khatam headquarters, which is in charge of all coordination of all military operations that the regime does. He reports directly to Khamenei. Every activity that any military force does comes under his command. He attended the SNSC meeting on July 29.

“Rashid and Hajizadeh were summoned to the SNSC session because of their special functions regarding this particular attack.

“After Khamanei’s order, the issue was discussed in the July 31 SNSC meeting. After that, they started designing the details of the plan, then sent to Khamenei for final approval. Afterwards, Rashid and Hajizadeh started implementing the steps for the attack.

“Mohammad  Fallah, Hajizadeh’s Deputy was deployed to the base in southern Iran to oversee the operation.

“The details of the attack were worked out in the Chitgar aerospace base in Tehran. After reviewing the final operations, Rashid deployed aerospace commanders to Khuzestan. This was September 7, a week before the attack.

“These commanders deployed to to Khuzestan province:

These were the kinds of weapons used in the attacks against the Saudi oil installations.

“In Khuzestan, the commanders were sent to the Omidiyeh base, 35km southeast of Ahvaz. This was previously the 5th interceptor base of Iran’s airforce. Units of regular army air defense are stationed in the base. It’s not an official IRGC base, which gives them a good cover.

“A section of the base was used by the aerospace force. Another group of IRGC commanders and personnel who had expertise on missiles and drones were sent to Mahshahr to participate in this operation.

“Based on the latest report we’ve received from inside Iran, a Squad missile team has entered the Omidiyeh base on September 22. We’re watching the situation.

“The missiles were produced by the Thamen ol-Aemeh Cruise missile group. A research facility was also involved.

“The missile were produced at Parchin, a very large military base near Tehran. It has 12 different sections which deal with different activities of Iran’s regime, including their nuclear weapons program. The Cruise missiles the regime has used in this operation were produced in section 4 of Parchin.

“The simultaneous attack on Saudi oil facilities was a blatant act of war by the Iranian regime. The regime is desperate to export its crises beyond its borders. They are counting on the inaction of the international community, so they can manipulate and gain concessions from the west. The only way to eliminate the threat of the regime is to change the regime by the people and their resistance.”

– Looking into the human rights dossier of the regime. Referring the dossier of the 1988 massacre of political prisoners to international tribunals. Recognizing the right of the Iranian people to resist.