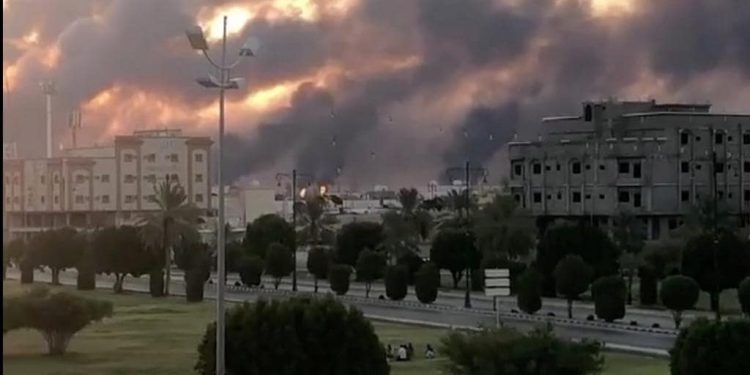 Iran attacked oil facilities in Saudi Arabia in a series of devastating drone strikes in September. A total of 25 missiles and drones were dropped on the Abqaiq Aramco and Khurais oil plants in a targeted attack on Saudi facilities. The Iran-aligned Houthis in Yemen previously claimed responsibility for the launch, which sent the price of oil soaring. But Iran’s main opposition group National Council of Resistance of Iran (NCRI) revealed new intelligence on Monday detailing how Tehran was directly behind the recent attacks on the Saudi facilities. NCRI’s intel also showed the attack was directly ordered by none other than Iran’s Supreme Leader Ali Khamenei.

According to NCRI’s report Khamenei ordered the attack at a July 31 meeting of the Supreme National Security Council. Regime president Hassan Rouhani and Foreign Minister Mohammad Javad Zarif were both present at the SNSC session.

The information was obtained by the People’s Mojahedin Organization of Iran (PMOI/MEK), which has sources from within the ranks of the regime and the Islamic Revolutionary Guard Corps (IRGC).

The U.S. administration of Donald Trump, which has imposed waves of sanctions after pulling out of the 2015 Iran nuclear deal last year, announced after Iran attacked oil facilities in Saudi Arabia that it would sanction Iran’s Central Bank in response to the aggression.

The regime is hopelessly trying to prevent a popular uprising and thwart the expansion of resistance units by using internal suppression and external sponsorship of terrorism. It seeks to contain the deep-seated anger of the society at its disastrous and inhuman rule.

It is quite telling that according to numerous reports from inside the IRGC, all IRGC forces were on full alert during  and after Iran attacked oil facilities in Saudi Arabia. IRGC units implemented suppressive maneuvers to intimidate Iranians in various cities and to fend off the possible threat of protests and uprisings as their chain of command were fast busy planning and implementing the attack against the Saudi oil facilities.

The NCRI warned that the regime is counting on inaction of the international community toward its aggressions. As long as this regime exists, it will not cease these hostile activities. The lasting solution for ending religious fascism as the source of all the crises in the Middle East is for the Iranian people to change this illegitimate regime with their popular uprising and with Iran’s organized resistance movement, the NCRI noted.

Mrs. Maryam Rajavi, the President-elect of the National Council of Resistance of Iran (NCRI), described Iran’s attack against oil facilities in Saudi Arabia a major step and a new phase in the warmongering aggressions of the religious dictatorship ruling Iran, adding that exerting power and decisiveness is the only language the mullahs understand.

Inaction only emboldens this medieval regime, whose primary victims are the Iranian people, she noted, emphasizing that the ultimate solution to rid the world of Iran’s ruling religious fascism as the source of all crises in the region is a change of this illegitimate regime. Mrs. Rajavi made the following recommendations:
– Previous United Nations Security Council resolutions on the mullahs’ nuclear weapons project and the ban on enrichment must be reinstated.
– Eviction of the regime, its Revolutionary Guards and mercenary militias from Iraq, Syria, Yemen, Lebanon and Afghanistan is an urgent imperative.
– The European Union must place Khamenei, his offices, the IRGC and the Ministry of Intelligence on the terrorist watch list.
– The UN Security Council must refer the clerical regime’s dossier on human rights abuses and atrocities, especially the 1988 massacre of 30,000 political prisoners to an international court.
– The world community must recognize the right of the Iranian people’s Resistance to overthrow the ruling theocracy and attain freedom

Why Iran is a threat?